This is the first in a series of articles for Cannabis Digest where Tracy Lamourie will examine the relationship between the government, and licensed producers and how that affects dispensaries, patients, and cannabis consumers. Tracy is a regular reporter for Cannabis Digest – a social justice activist, author, and PR practioner who recently moved from Toronto, to Hamilton, Ontario, in 2015, to find a thriving local cannabis scene.

Hamilton is 45 minutes away from Toronto, and currently has a thriving dispensary scene. After Melanheadz left town, the city had no storefront dispensaries til Bright Moments opened in summer 2015. Then came The Medicine Cabinet on Barton Street in the same space that Weeds Hamilton briefly occupied before a local rebranding. Royal Farmacy opened up at Main and Kenilworth on 4/20 – Delta Nine in the downtown core at King and Catharine , Temple east of Hamilton Vape on Main – MMJ in Hess Village, Pacifico on James with another coming near the university. Dank Delivery operates in town, and Hamilton Mountain gets it’s very own dispensary, Mary Jane’s Closet, on October 1st. By the time you read this, there may be even more!

So far, Hamilton has not seen a Project Claudio style crackdown,. though Hamilton Police acted against Bright Moments, which closed its doors this summer, and more recently, MMJ (part of a chain from BC) saw police action on September 21st. 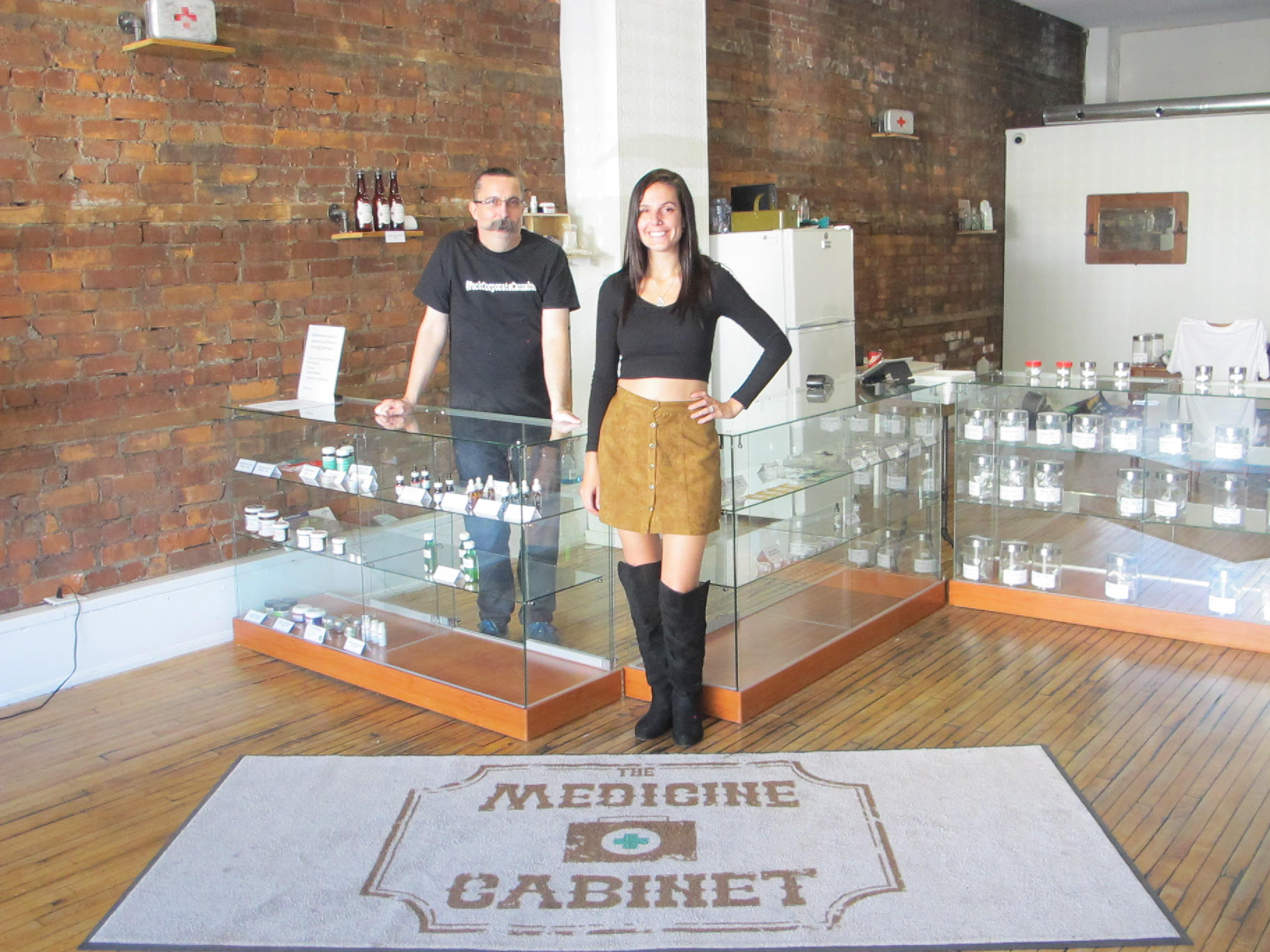 In this busy urban scene, Britney Anne – the “Hamilton Hemptress” – is building her very own “Hamilton Hempire” that includes The Medicine Cabinet dispensary as well as Cloud Nine Vapor Lounge (well known in the city for it’s Wednesday night comedy shows hosted by the inimitable Dan T Peters – show in the accompanying photo with Britney Anne at The Medicine Cabinet’s counter.

Cannabis Digest had a few questions for Britney Anne, who recently made a splash in the Canadian cannabis scene with a strongly worded letter that got the attention of some big name licensed producers. She followed that up with a free half a gram offer to patients who filled out her survey sharing their dispensary woes. Tracy caught up with Britney Anne at The Medicine Cabinet to ask a few questions.

Tracy: You recently wrote a pretty scathing open letter to LP’s that got a lot of response. What made you write it?

Britney: Since the 1970s, marijuana has been a booming industry in Canada. Underground entrepreneurs planted the seeds of our culture, and marijuana-related businesses began sprouting up all across Canada. Whether it’s a seed company, headshop, Vapor lounge, or dispensary we have ingrained ourselves in Canadian culture.

After the first sweep of project Claudia raids and the apparently lobbying of LP’s to the city of Toronto, I am furious! I am angry my peers have been arrested and jailed over a victimless crime. I am angry countless people have to find an alternate unreliable source for their Cannabis. I am angry I have I go to work everyday wondering if this is the day that I get raided.

Before marijuana was cliché in Canada, the Cannabis community was thriving! We were building businesses from coast to coast, paying taxes and creating jobs. Now that we have large corporations coming into the picture, just like every other small business we are being squeezed out. Unfortunately for us, it is the squeezing of handcuffs on our wrists. I refuse to have my businesses pushed out by corporate greed. The letter is my declaration of solidarity to the Canadian cannabis community. We will never back down.

What was the response from the medical community?

Going into it, I didn’t know what to expect. I had a feeling everyone felt the same way I did, and I was right. Thankfully my letter was received very positively by everyone in the community and it seems we all are on the same page! 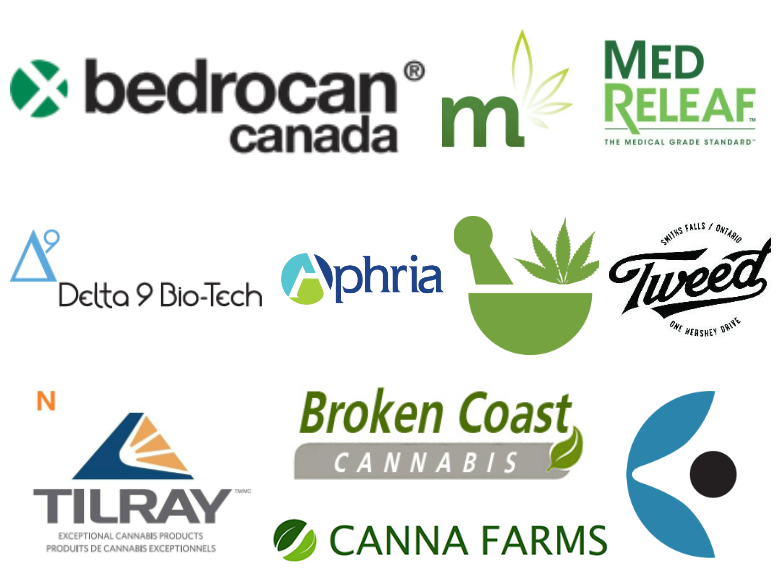 What kind of reaction if any did you get from LPs?

Unfortunately there was no response from LP’s. But I am sure their answers would have been the same response as usual. “Our products are tested, our products are safer, we are more educated on the subject ect.”

Is there anything you thought about saying but didn’t?

That letter was exactly how I was feeling at that time. I think that it said what I had to say in a very direct way! I honestly wouldn’t change a thing!
Tell us about the initiative where you gave a half gram away to patients for their LP responses?

We still have this initiative going on at The Medicine Cabinet. Our customers receive a free half gram for filling out our LP questionnaire. We have had great response from it, and unsurprisingly the answers are all similar. Unfortunately for them, the LP’s products are inferior, shipping times are unacceptable and the whole processes seems like more of a nuisance the a convience to patients.

This questioniare has really confirmed all of my beliefs when it comes to LP’s. Every time someone fills out the questioniare it confirms everything I have said about LP’s. From a patient perspective they are obsolete, inconsistent and the wait times are draining. Everyday I have customers coming to my store because their LP could not provide quality Meds in a timely fashion, so the dispensaries are filling the void that LP’s simply can’t.

What would you say LPs impact has been on the community? Do you blame them for Project Claudia and other Toronto dispensary crackdowns?

I won’t say I blame them directly, but I know there was some involvement on their part during the project Claudia raids. They don’t want dispensaries to exist. Our products speak for themselves, as well as the constant line ups out our doors. If there wasn’t such a public demand for us then maybe the LP’s would be enough for the community. The people have spoken, there is a need for dispensaries and we are not going anywhere whether the LP’s, local police and government like it or not.

How do you see the future of the canna industry in terms of the various players and how they might or might not relate to each other ? (ie dispensaries, LPs). Can you foresee any kind of peaceful coexistence?

Dispensaries and LP’s have existed together since the licensed producers came into the picture. Now unfortunately we are feeling corporate pressure, that all other small businesses in our country have felt.

Whether it be a restaurant, pharmacy or small clothing store. We live In a would where bigger is supposed to be better but I don’t believe in that. I believe a person is far more compassionate then a order screen from an LP website. I Believe my staff is far more educated on genetics and dosage then an iPad store.

I believe we could peacefully co-exist together. The Producers have their loyal customers and we have have ours. People like options! That’s why in a food court there are 10 choices instead of one. The fact that LP’s are trying to restrict you to buying from only one company is completely ludicrous to me!

I would like to think I see a bright future for the Cannabis community, but unfortunately it is hard to be positive. Specifically in Ontario, where it seems dispensaries are at war with police. I know I still plan to be here in 10 years, maybe with a few more charges, but I will still be here.

How do you think the changes to the medical program in light of Allard might change the way LPs operate?

What I see coming from the allard trial is just another attempt at corporate takeover from the growing perspective. Where as before patients couldn’t grow under the MMPR, now the AMCPR allows patients to grow, and who better to buy your seeds from but the LP’s! BUT WAIT!!! Not only can you buy your seeds and meds from the LPs, they will grow them for you too!

I think these people are delusional. This industry is already here. What makes them think they can come in, flex their muscles and shut down an industry that has existed for decades? Patients know how to grow their own Meds and they will. They have been doing it for CENTURIES. Ok, maybe there is a person here or there who will have AN LP grow for them, but the people who know, know better then to leave it up to the LP’s. In the producers mind, dispensaries shouldn’t exist, and now they are trying to push out the seed banks!? What’s next? Hydroponics stores? 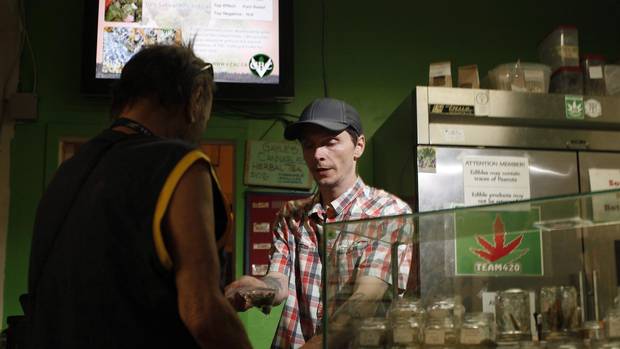 I think think some will. Raids aren’t cheap. They cost thousands in lost product, cash and lawyer fees. Some people are willing to sacrifice themselves and their businesses and some aren’t. The ones that are meant to be here will be here, and the ones that aren’t will not.

If you hear rumours of a raid in your city, and you lock your doors and shut down your business, you might as well get out while you’re still in the green. While I understand it’s not fun to be arrested, it is what we have to do to make change. We have to stand our ground and prove we are not going anywhere.

Prepare your store, make frequent cash drops and product pick ups. The less loss you experience, the more likely you are to be able to reopen! We know there could be something lurking in the shadows, so be prepared!

Good luck to all dispensary owners who are in this battle with me. I will see you on the other side where hopefully, the grass is greener.

Extraction and Concentrates Panel at the CHCE 2017

8 Challenges to Opening a Cannabis Dispensary