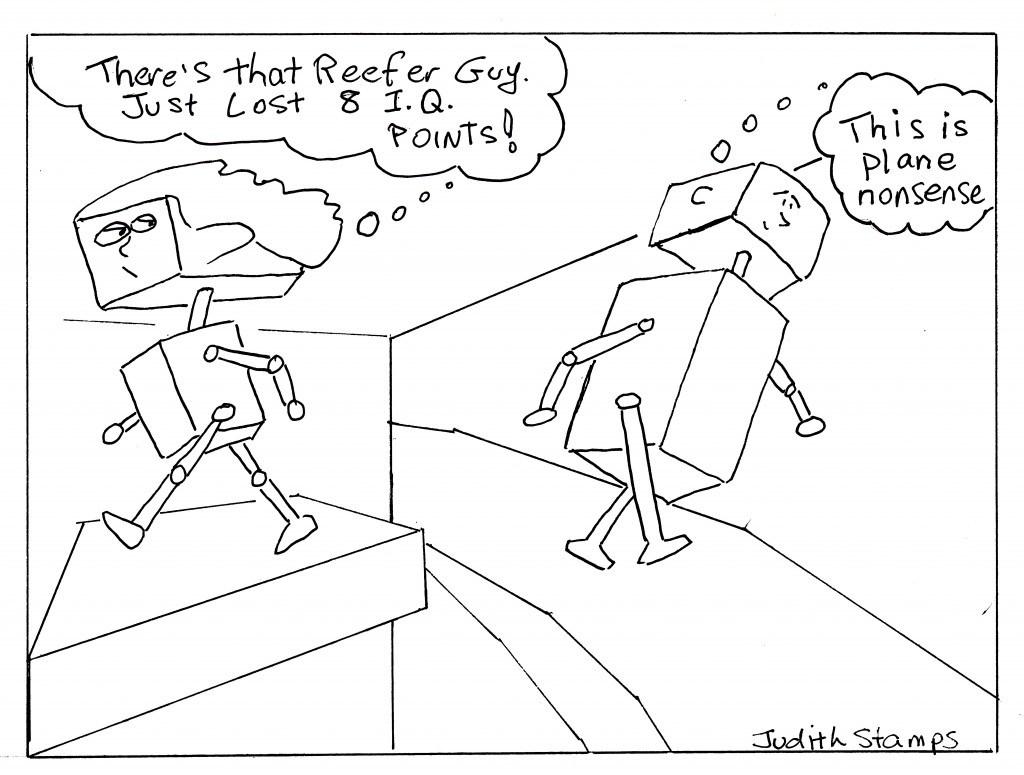 In 2015, Canadians will be heading into a federal election.  A key issue will be legalizing marijuana.  The contending Liberal Party of Canada led by Justin Trudeau, supports the idea.  The ruling Conservatives led by Stephen Harper oppose it.  But while the Liberals have taken the lead by proposing this legislation, it is their opponents who have defined the terms of the debate.  They have chosen for their battle cry:  Marijuana endangers the developing brain.  In December 2013, they announced an 11.5 million dollar campaign against legalization, focused specifically on youth.  Of course, this viewpoint is not limited to Canada.  America’s National Institute for Drug Abuse (NIDA) supports it.  America’s Partnership for a Drug Free America has recently changed its name to Partnership for Drug-Free Kids.  Project SAM, a US national anti-legalization organization says in its literature:  “Research…states clearly that marijuana can impair the developing adolescent brain.”

So what is the evidence?  In a 2012 New Zealand study with just over a thousand participants, researchers examined IQ scores over time. They determined these for participants as youngsters, and again at 38 years old.1 They compared the scores.  They then looked specifically at the 38 participants who had been heavy marijuana smokers and concluded that, as measured by the tests, their intelligence had dropped by eight IQ points.  You can find these results quoted by The American Psychological Association, The National Academy of Sciences, NIDA, in The Guardian, and in every other blog out there.

A second study with 40 participants, published in April 2014 in the Journal of Neuroscience, was conducted at Boston University.2 Employing MRI, it scanned the brains of twenty marijuana smokers aged 18-25 and compared them with twenty nonsmokers.  Researchers reported abnormalities for smokers in two areas of the brain that play a role in the brain’s reward and aversion systems, and thus in addiction.  This study is also widely quoted.3 Some journals have dramatized it, citing it as proof that marijuana kills reasoning and decision making skills.  One headline reads:  “Will Marijuana Turn Your Teenager’s Brain Into Mush?”  The answer was “Yes.”

One worries about researchers these days.  You cannot get significant results by testing groups of 20, or even 38.   In any case, none of them thought to ask what strains of marijuana their subjects had been smoking.  So what were they measuring?  Why do they publish such nonsense?  And why are they so persuasive?  In what follows, I will argue that the current obsession with the teenage brain is an attempt to maintain a mechanistic view of science and society that has dominated our society since the 1950s.

Intelligence tests have been around since the late 19th century.  But mass attempts to test and subsequently rank children really belong to the cold war era of the 1950s.  In 1957, The Soviet Union launched its satellite, Sputnik.  The event was a call to arms.  The Russian were ahead.  Their children, it was feared, were receiving superior math and science training.  Besides, North America had been relying heavily on scientists who had emigrated from Europe in the 40s.  Importing scientists is a time limited strategy.  It was time to build a local elite.  In 1958, the US government signed into law The National Defense Education Act, a set of initiatives intended to boost the teaching of sciences in all schools.  Meanwhile, IQ testing had become the standard; by the mid 1950s, virtually every school in North America was involved.  This competitive view of IQs has never gone away; it has only worsened.  Contemporary parents linger over applications to prestigious preschools; mass markets pile on the Baby Einstein toys.

But while 50s educators were bent on high achievement for youth, the notion of science they pushed was based on dominion.  It aimed to subdue nature; it valued the artificial over the natural.  Childbirth was reduced to hospital procedures, babies were bottle-fed, and newly introduced, frozen TV dinners, touted as superior to homemade.   Everyone loved the miracle drugs, those substances derived from coal tar: antibiotics such as sulpha, antipsychotics such as Thorazine and tranquilizers like Miltown, pervasive and highly prescribed.  Pharma was in; home remedies and plant therapies were out.  Predominantly, they still are.

This version of science was also mechanistic.  No one looked at children’s IQ results in the context of nutrition or of their social experience.  Rather they were seen in isolation, as if their brains were machine parts.  Critiques of the studies cited above can illustrate these points.   Consider the New Zealand study. Participants who had smoked marijuana exhibited a decline in IQ.  But as labour economist Ole Rogeberg has noted, such results can be explained by economic differences.  The researchers had not looked at the participants’ standard of living.  Individuals who have grown up in poverty always experience cognitive decline with age.  If you leave school at eighteen and work at a boring, low paying job, your language and math skills suffer.   IQ studies carried out in such a disconnected manner tell us little of value.

Similar problems plague the MRI study.  Carl Hart, Associate Professor of Psychology and Psychiatry at Columbia University is a key critic.  Hart notes that the researchers did not ask how, or even if, subjects were employed.  They did not ask if subjects enjoyed good family relations, or if they had experienced a trauma, any of which could have altered the results.  In this study, marijuana smokers’ brains were said to exhibit abnormalities.   But the notion of ‘abnormality’ was not placed in context either.   Studies based on tobacco or caffeine use might have yielded similar levels of abnormality.   Anyway, what’s an abnormality?  Brain scans devoid of social context are for mechanical brains, not human ones 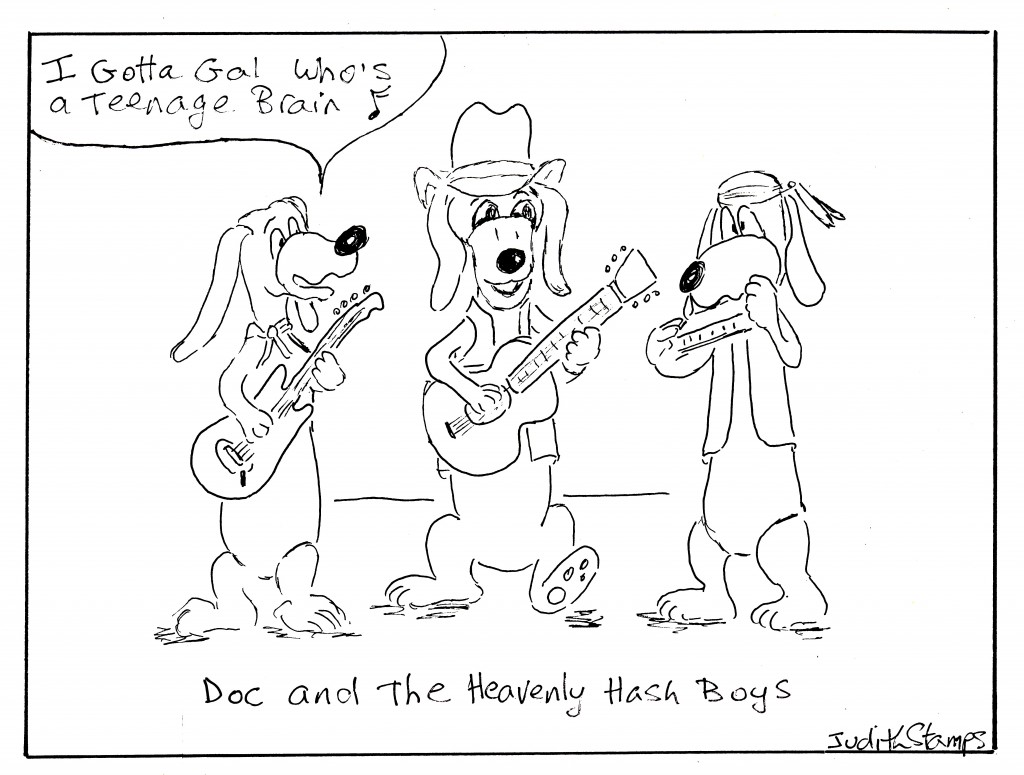 Compare this debate to views expressed by authorities in the 1960s.  The youth-led social movements of the time—pro civil rights and participatory democracy; anti war and consumerism—came under heavy criticism.   Marijuana did too, since it travelled with these countercurrents.   IQ continued to be a matter of national concern.  Yet no one worried about the counterculture’s brain.  Its participants were labeled wrong headed and unpatriotic, but they were not considered brain impaired.  They were well educated, articulate, talented, and achievement oriented, much as cannabis fans are today.  The case against marijuana was political.  Then again, the 60s counterculture was never subjected to an MRI.  If it had, we’d be blaming the civil rights movement, the war protests, the New Left and organic gardening on the teenage brain.

Let’s widen the lens even further.  Who invented the teenager anyway?  In the war years, people under the age of 20 served in the military.  Those that left school early could find meaningful work.  They married, started businesses and engaged in political activities.  What would their brain scans have looked like?  Were they ‘teenagers?’  Mechanization, mass migration to cities, and the need for extra years spent in school have created generations of intelligent beings with few avenues to contribute meaningfully to society.  Governments make no effort to create programs that integrate youth into real activities:  forest renewal; urban renewal; food production.  Instead, they create misery by denying them access to free or inexpensive higher education.  As a badge of maturity, they offer nothing but a license to drink.   Heaven forbid they should offer a joint.

Children in the 1950s were herded into gymnasiums to take batteries of IQ tests.  No one told them what was going on.  They were test subjects.  Teenage brains are tossed about in public debate today as if their owners were infants whose parents were debating the merits of feeding schedules.  They’re not even seen as subjects.  What is it with our relation to youth?  Do we respect so little their ability to make reasonable choices?  Can we not bring them into the discussion?  What if we said this?  Hey guys, we’re legalizing cannabis.  You can have some when you are eighteen.  It seems to have worked elsewhere.

So what is to be done?  What should Justin Trudeau do?  It is no good, in my view, fighting a defensive war over the teenage brain.  Brains do not exist outside of a wide social context.  As the political rhetoric develops over the next election campaign he needs to grasp the limited, non-holistic mindset from which his opponents’ views spring.  This isn’t just about cannabis and the brain.  It’s about creating a nation in which youth is integrated and supported.  Let him announce new youth programs in science, culture and sports.  Let him offer funding for universities, colleges and trades programs to make them easily affordable.   Let him really protect the youth.  If he does this, mechanistic notions of brain studies will dissipate, and his opponents will have nothing to say.   Otherwise he’ll be mired in their outmoded mindsets without a clear way out.

4. Yes, I am aware of the 2002 study reported in the CMAJ that shows an increase in IQ for mid level pot smokers.  There were nine of them, an absurdly small number on which to base a conclusion.

Next article Kirk Tousaw on the Smith decision

Twenty One Years Of Marches, Hotboxes and Cannabis Education

Stephen Calabria·September 1, 2016
There are 8 comments 8 comments