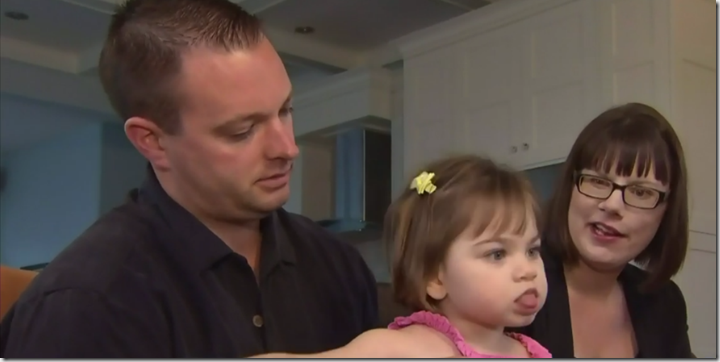 It’s unusual to meet another Kyla. While the name has gained some popularity in more recent years, I still remember as a child wishing for a recognizable name like Jennifer, or Julie. There were lots of girls in the Jenny club. Kylas were rare. Years would pass between meetings of other Kylas. New introductions inevitably included a quick, and often awkward ‘how to’ lesson on the name’s pronunciation.  So when other activists and friends started telling me stories of another Kyla Williams, I was intrigued.

Kyla Williams, who just turned three on February first, has already seen more doctors than most of us can expect to see in a lifetime. After a healthy delivery, she progressed along expectations.  At 4 months her progress began to slow, and there was an additional concern about unusual eye movement.  By 6 months, she was referred to a pediatrician who immediately recognized her symptoms to be epilepsy.

Kyla spent 3 long weeks at the Vancouver Children’s Hospital where she was given a plethora of tests including EEGs, MRI, cardio and metabolic tests. Different drugs were tried, and failed. Kyla’s epilepsy was confirmed with evidence of abnormal brain activity, which was causing her cortical visual impairment. 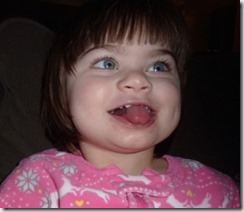 It is likely that Kyla had been suffering from ‘absence seizures’ from the age of she was two months.  These are characterized as short periods of ‘blanking out’ or staring off into space. Extensive DNA testing and study has not revealed the cause of Kyla’s condition.

When she was released she was to receive steroid injections every second day at the local hospital, but soon showed adverse effects. She had to be weaned from the steroids, was placed on 3 different pharmaceuticals, and on a ketogenic Diet.

For about six months she had some relief from the seizures but was “like a zombie,” her grandma, Elaine Nuessler, told me in a phone interview. Then the seizures returned, and escalated rapidly.  By Christmas of 2013 she was having so many seizures they couldn’t count them; they were averaging at least 100 a day.

Kyla’s mom Courtney, and Grandma Elaine (who was there in support, as Kyla’s Dad Jared was away working) were given the painful news that there were no more treatment options available for her condition.  It was a dark teary drive back to Summerland from Vancouver, but a spark of hope was offered from an unlikely source.  Kyla’s 91-year old great grandfather had watched Sanjay-Gupta’s report on CNN about Charlotte’s Web, a high CBD cannabis oil that had been used to treat children with intractable Epilepsy in the USA.  He called to tell them about it.

“When we asked Kyla’s neurology team about using high CBD oil they told us it’s illegal, it’s not available and it’s not an option,” Elaine told me. Just like that; a frustratingly simple response to a complicated illness by the very people in charge of finding the answers.

Thankfully Kyla was blessed with a strong family that wasn’t content to accept ‘no’ as an answer. The family researched, and sought out the medicine they needed to give the girl they loved so much.  They wanted her to have the quality of life she deserved.  Eventually this journey led them to Jim Leslie and The Kootenay Medicine Tree. 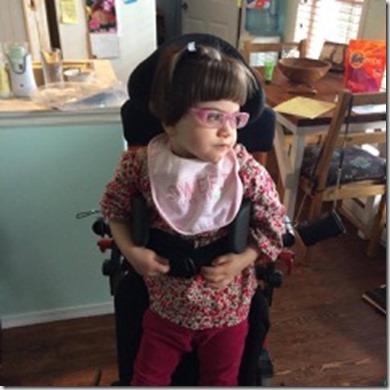 With the excitement typical of any proud grandma, Elaine shared with me her excitement about Kyla’s latest achievements. “We played an interactive game with her, which is HUGE for Kyla.” She explained that Kyla is unlike a regular three year old. The seizures and pharmaceuticals have robbed her of the normal development other children enjoy.

At one point she was even unable to suck her thumb because the pharmaceuticals were interfering so much with her motor function.

They had just finished weaning her off of phenobarbital and had only one more pharmaceutical to wean her off of.  “Already,” Elaine said, “we are starting to see Kyla’s real personality come out.  I am really looking forward to it being just Kyla, without the drugs.”

One of the biggest frustrations for Kyla’s family and the other families like hers is an inconsistency of product. With each new crop of plants, unless the plants are cloned, the cannabinoid profile changes. These variations, as small as they might be, can really affect children’s small bodies. Their systems are sensitive; a change in weather can create a bad seizure day.  They cannot handle a change in cannabinoids.

Kyla’s high CBD oil is made from the hemp plant, which one might theorize would be easier to get in Canada because this country has a ‘legal’ hemp industry.  But it isn’t easy.  According to Elaine: “Kyla’s medicine comes from the part of the plant that growers are legally required to destroy.” 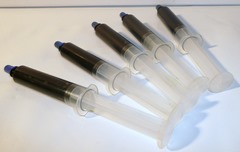 Elaine cautions me against legislation for pure CBD oil, however.  As my husband (Chris) says these kids are ‘like snowflakes, each of them unique.’  Some kids require higher THC levels than others.”

Elaine thinks the extracts Supreme Court case (R v Smith) in March is an important step in getting help to kids like Kyla. “I am hopeful and confident that the right decision will be made,” she says.  But, she admits, there is still a long way to go.  “How do you dose a cookie for someone with such a sensitive system as Kyla?” she asks, adding that there needs to be research, testing, and education of the public and medical community.  She is grateful for the work being done.  “Kirk Tousaw, Owen Smith, and team have my deepest gratitude.  This case is so important to all of us.”

Dealing with the stigma has also been a challenge for the family. “People just don’t understand the many difficulties in getting Kyla’s Medicine,” Elaine told me. Chris, Kyla’s Grandfather, is familiar with the stigma. A retired RCMP officer, he has spent time enforcing the law that now holds his granddaughter back. “He has come 180,” Elaine shared when I asked about the difficulty her husband faced changing his mind about such a big topic. “Once he saw the improvements in Kyla’s life there was no looking back.”  She referred to one of her husband’s more notable statements about cannabis being a gateway drug. “Yes, its a gateway drug, its a gateway to good health!” Having a retired RCMP officer around has given the family a special kind of strength. “We are not afraid of the law, or the system,” she told me. Unlike many families they feel they have nothing to hide.

As Kyla’s family sought answers, they came into contact with more and more families dealing with similar problems—intractable epilepsy and other seizure disorders. The current pharmaceuticals and treatments are not working, and the options have been exhausted but the medical profession is slow to catch up.

She relayed to me a story of a four month old that was not getting any relief from seizing, and how the parents were seeking cannabinoid therapy as an option. When the mother relayed her thoughts to the neurologist the doctor was taken aback and said: “But don’t you know that it can cause Schizophrenia?”

It was interactions with these special families that led the way to the creation of Kyla’s Quest, an organization devoted to helping families find educational resources, support, and financial assistance obtaining oil (when the funds allow). They also advocate for research and legalization of cannabis oil.  A scientist from Simon Fraser University wanted to study Kyla’s brain and how the high CBD oil was working, but without a legal source of the oil, the research cannot move forward.

At this time, Kyla’s Quest is helping 7 families in similar predicaments. They will be holding a pulled pork dinner and fundraiser on May 23 at the Orchard House in Penticton, BC. There will be music provided by 4 different bands, dancing, and a silent auction.

“The fundraising is important.  We are dealing with families with very ill children.  Often one parent needs to stay home with their child, and of course, cannabis oil is not covered by any medical plans and can be quite costly,” Elaine said.

You can also donate directly through their website www.medicalcannabisforsickkids.com and keep up to date with our little heroine’s progress on Kyla’s Quest on Facebook.

I no longer crave to be a Julie.  In fact, upon learning Kyla’s story, I am proud to share both names with such an inspiring little girl. Welcome to the Kyla club young one, and may you be ‘victorious’ in your quest, as that is what the name means in both its Hebrew and American translations.

Next article Will Victoria Close or License Cannabis Dispensaries?

The 12 Days of Christmas

Owen Smith·October 14, 2016
There are no comments yet No comments

Cannabis and The Green Party of Canada