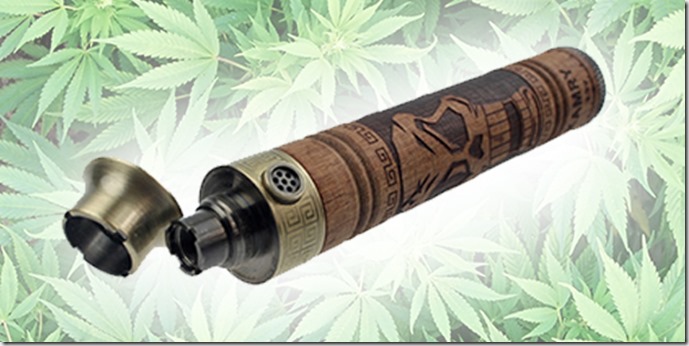 I recently went to Las Vegas and saw many people at slot machines with these pens in one hand and the one arm bandit in the other. Some of the pens are as large as a king’s sceptre and apparently offer a status symbol and possibly a blunt weapon for defense against unruly patrons.

To work properly these pens are dependent on the oil viscosity being able to flow into the wicking device. The oil or wax, produced by an extraction process, frequently does not have the proper viscosity to be used in pens. Manufactures of oil sold for use in these vapor pens are now adding various agents to these oils to make them flow properly. In some cases these additives can have additional benefits or possible health concerns for patients using them.

Propylene Glycol is approved as an additive for nicotine vaporization in the U.S.A and is considered safe for this purpose by the FDA. (When have they ever made a mistake?) Cannabis oils and waxes can be diluted with Propylene Glycol and vaporized in a similar fashion. Do other terpenes used as a dilatant of cannabis oil offer this same safety when vaporized? The answer is complex and cannot be answered in the current climate of political ban on scientific study of cannabis and cannabinoids.

To make the situation even more complex, is the composition of the many different terpenes that are contained in the various strains of cannabis.  Recently Cannabis Cup events in California have been publishing the presents of different terpenes profiles of each cannabis strain entered. Some of the cannabis testing labs have booths at these cup events and have samples of 15 or more different terpenes they use for standardizing and calibration of their lab equipment.  You can smell samples of each of these volatile terpenes some smell fragrant and sweet others pungent and repulsive. Each of these terpenes have different properties some with beneficial medical effects in themselves or when combined with cannabinoids. 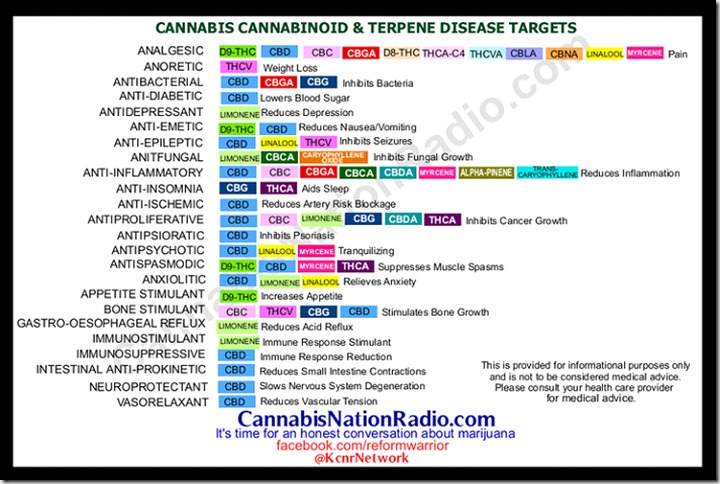 The combination of all the different terpenes, make a unique smell that is characteristic of the strain of cannabis that produced that particular terpene profile. The common person would look at the results of these terpenes profiles for a particular strain of cannabis and conclude you could just add a pinch of this and a bit of that and make any swag smell like the best purple bud you admire? Unfortunately the situation is much more complex than that. 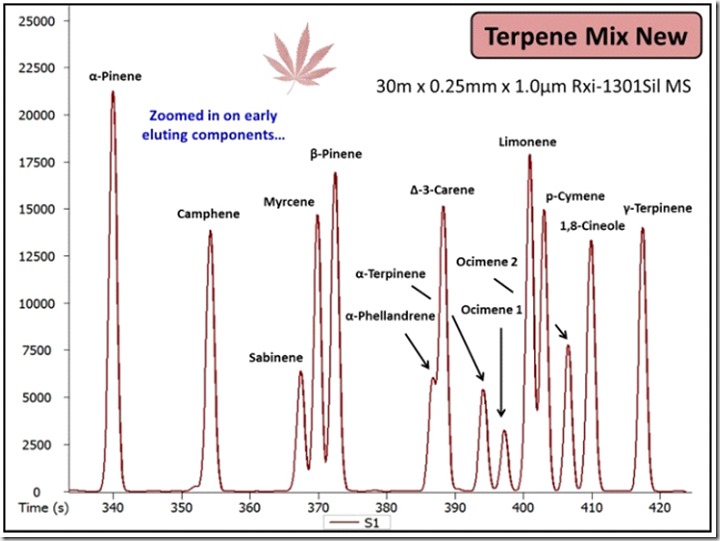 Each spike identifies a different terpene on this sample of cannabis

Tobacco companies have long ago addressed the problem of variation in the taste of different tobacco fields. Brand name products must have the same quality, consistency and flavor. The Tobacco companies purchase tobacco from many different sources and they combine all the different tobacco’s and extract everything from each different batch. They then add the extract back to all of the tobacco and then add a proprietary blend of other herbs and spices (1% this and 3% that) and then they have a consistent product that always taste the same. The resulting blend is then consistent in flavor and can be carry a brand name. So the race is on, for companies to find combinations of terpenes they can add to cannabis products to augment the smell or medical effect.

Currently you can purchase flavoring agents for tobacco or cannabis. Each of these different agents may have effects or health concerns which are not presently known. What is known safe as for GI absorption may not be safe when vaporized.  It is not only the agent, but the combustible by-product that could be of concern. There is no testing on these agents for long term effects on humans.

There are many labs now selling vapor pens with flavored oils. These Cannabis oils are augmented or “fortified” with terpenes that have lime, lemon, orange or other flavors. Terpenes are the primary constituents of essential oils of many types of plants and flowers. Essential oils are used widely as natural flavor additives for food, fragrances in perfumery, and in traditional and alternative medicines like aromatherapy. They are classified as substances generally recognized as safe.  Many of the terpenes are in our food products or may be taken orally as supplements.  Companies offer oral preparations of these terpenes, with warnings of; “no daily value requirements are known for these substances.”  Terpenes have utility as cleaning solvents and other industrial applications. Plants make terpenes to repel insects, and some of these terpenes can be used as insecticides or insect repellents. D-limonene is a terpene that is contained in dog flee shampoo. These substances are classified as; “substances that are recognized as safe” but may not be safe for human consumption as a vaporized product. Can augmented oils with these flavoring agents be used safely for vaporization? Is the safety of vaporizing these chemical agents as safe as vaporizing the cannabis oil? Only clinical trials will determine this and these questions are fraught with ethical questions of exposing humans as guinea pigs.

The point of this article is this!

Do you want some chemist to add chemicals to your cannabis oil without knowledge of long term effects. They are trying to sell you a nice smelling oil product that may later causes you some health issue? Just because it smells good does not mean it is good for you. The perfume industry can give testimony in this regard.

The practice of augmenting oils with flavoring agents and terpenes will also occur with the plant. No doubt you will soon be able to purchase lime or other flavored cannabis. Why would someone change the flavor of cannabis? Why risk adding a substance that could possibly cause harm? Many would say you can’t improve on the taste of cannabis so why even try this? Humans always want something different and a variety of choices.  Business knows this and will provide what the customer wants. The multitude of flavored tobacco products are proof of this.

To actually prove these augmented products are safe would require a double blind study which is illegal in the United States. This would be costly and almost impossible to do ethically or legally.

I have previously published an article entitled; Rootless Transport Mechanism (the RTM or Dr. Allen’s Procedure) in Treating Yourself Magazine issue 18 pp. 80. This was again reprinted in Treating Yourself Magazine issue 35 pp. 74-76. This new reprint of the original article included original diagrams explaining Osmosis and Tonicity and explanations of MK-ULTRA a plan to weaponize cannabis. In this article I developed a method of flavoring cannabis with different chemicals that the plant roots would not absorb. If you cut the roots off, the plant can absorb larger charged particles like flavoring agents or flavonoids. These flavoring agents would be delivered to the bud directly without the roots as a filter. Using this method you can make vanilla flavored cannabis by placing the plant with the roots cut off in a vanilla extract. Virtually any flavoring agent could be used as well as antibiotics, steroids, bronchodilators or even Viagra! (That’s right! Boner Bud!) This could develop into a new process where the root growth would be inhibited in a hydroponic application to allow absorption of large particles. Megaponics? (Hydroponics without Roots) The plants would be bathed in a ICU type environment and fed large molecules to change the composition of the end product of the plant. This would allow precursors of THC (phenols and terpenes) to be absorbed by the plant and make super THC, CBD or other cannabinoids.

Additional methods of Augmentation or Flavoring of Cannabis

spraying a topical substance on cannabis is an age old problem. Some people were known to spray Coca Cola and other crazy substances on cannabis for varied, absurd reasons. This technique was used to increasing the weight of the cannabis. Cannabis that is sprayed with a water soluble substance or dye may be exposed by placing a bud in a bowl of water. The bud sprayed with dyes or water soluble substances will leach the dye out in the water.

Gasification. There is a new, almost undetectable, technique for flavoring cannabis by using volatile flavonoids and heating them to a vapor and exposing the cannabis to this gas. You can use Tobacco flavoring agents and place them on a cloth and place the cloth in a bag of cannabis and let it set in the sun for a little while. The cannabis will have the same smell as the flavoring agent.

I first encountered this technique after learning about an instance where cannabis had been sent in the mail. The cannabis was isolated in a separate baggy, but the package was shipped along with a bag of laundry detergent. The mail must have taken several days and most likely was in a hot truck during transport. You can guess what the result was. The heat had gasified the laundry soap perfume. The cannabis was bomb, but it all smelled like you were smoking ultra-clean underwear! Even though the detergent was in a separate container it flavored the cannabis with a disgusting perfume.

Cannabis and its concentrates can be adulterated or augmented with terpenes and other flavoring agents. Be cautious of vendors selling cannabis oils that are flavored or augmented with anything that is not approved for vaporization until more is known.

The war on Cannabis goes on and will not go away anytime soon. There will most likely be new regulations to “protect the public” and as always; Beware of those who want to protect you from something, they are often the people you need protection from.  Often laws are made on assumption rather than science. It may take a long time to determine under what conditions these additives are safe to use and what conditions they are not safe.

Read more from Dr. Allen on the Cannabis Digest Blogs