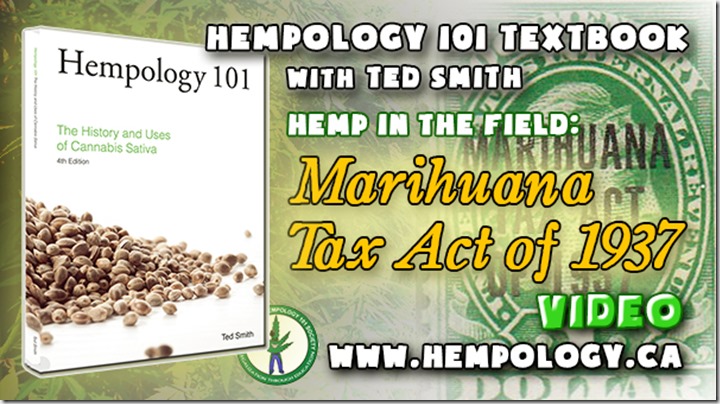 While the potential of hemp was being explored by many farmers and entrepreneurs at the turn of the 20th century, the competition was quietly working in the background to take it out of the  picture.  Though some countries like Canada prohibited cannabis as early as 1923, it was not until 1937 that the US passed the 1937 Marijuana Tax Act.  The fact that this law affected both hemp and cannabis surprised many important groups, though they lacked the political power to stop it.

The American Medical Association was one of the two main opponents of the law because cannabis was still used in a number of medicines that did not have adequate replacements, in particular for glaucoma.  The other large group upset with the tax act was American poultry farmers, who fed their chickens hemp seed because it helped them produce beautiful eggs and the birds were healthier, too.  Despite their pleas, the act passed with little debate among politicians.

Most of the details about how these industries worked together to eliminate industrial hemp and medical cannabis under the guise of protecting citizens from a terrible narcotic are left for the chapter on prohibition.  The fact is that cannabis was made illegal because it has so many uses and is so easy to grow that it threatened the profits of industrialists and capitalists who cared nothing for agricultural life.  Indeed, they looked down upon farming as a lifestyle suited for peasants and have sought to squeeze the family farm to the point where they are struggling to survive.

For more information about the various uses of hemp and why it was prohibited, you really should just buy my book, HEMPOLOGY 101: THE HISTORY AND USES OF CANNABIS SATIVA.  Of course, you could be cheap and just watch these videos we produce every week but that will only cover a fraction of the material contained in the book.

Cannabis and The Green Party of Canada

Ted Smith·October 26, 2016
There are no comments yet No comments