Well it has been a very busy spring for cannabis activists across Canada. Starting with April 20 celebrations, which were highlighted when Canada’s Minister of Health informed the United Nations that our country was going to introduce laws legalizing cannabis in one year’s time, this spring has been full of excitement. There is definitely a buzz in our community that is gaining in volume and complexity.

In Victoria, the annual April 20 smoke-in at City Hall proceeded without a problem, except for the two drunks that were taken away by ambulance. Our event is pretty basic compared to Vancouver’s; they had at least 70,000 people on Sunset Beach. But for the 2,000 or so people in Victoria, the 420 was a blazing success. The biggest problem for both events was the press trying to make it look like we were not being responsible for cleaning up the garbage. In truth, clean-up has always been a priority for organizers. 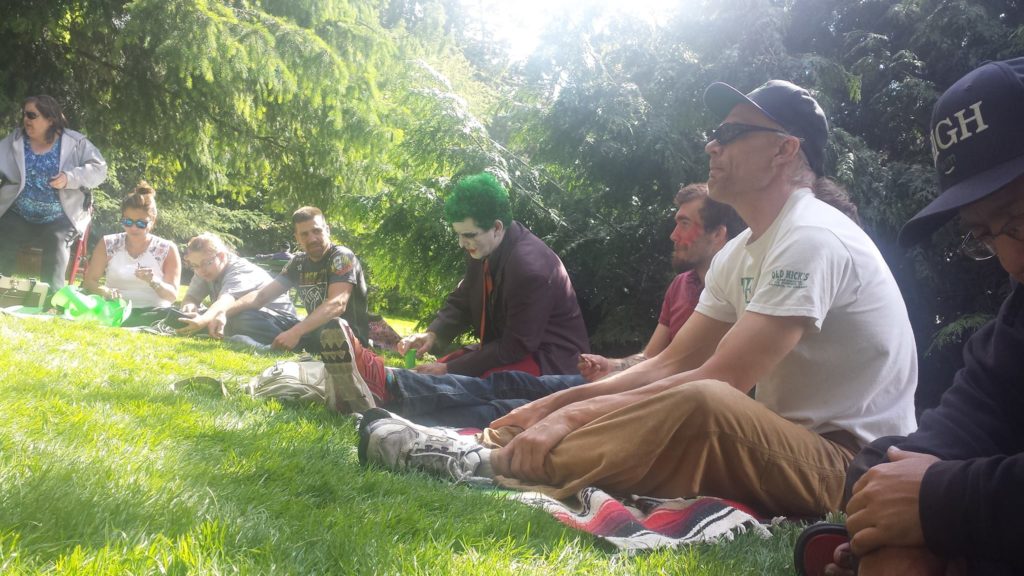 On June 11, the one year anniversary of Owen Smith’s victory at the Supreme Court of Canada, we celebrated International Medical Marijuana Day with a silent art auction at the Victoria Cannabis Buyers Club, and a picnic in the park. A few others across Canada joined us by having picnics, including folks in Winnipeg, Halifax, Vancouver, and Sechelt on the Sunshine Coast of BC. The City of Victoria officially declared June 11 as International Medical Marijuana Day, and once again we were giving out cookies at the event, which was held in Beacon Hill Park where Hempology 101 used to meet Wednesday evenings.

In addition we held our annual game of Reach For The Pot at the Victoria courthouse on Cannabis Day, known more often as Canada Day. These days I do not get to play my games very often, so it was a special treat for me. One day I will be spending a lot more time playing these games, as it is a unique form of live performance that I truly enjoy.

Meanwhile, the City of Victoria is slowly drafting bylaws to regulate dispensaries, and the Victoria Cannabis Buyers Club is hoping to be first in line. While the original bylaws followed those implemented in Vancouver, City Council in Victoria wisely chose to amend several controversial rules, including the ban on edibles, deliveries and mail orders. Unfortunately, as of press time the amendments have not been put to the council for second reading, so the details are not public yet. There should also be something in writing that gives the council the ability to grant the VCBC permission to continue operating a smoking room, something our club highly treasures. 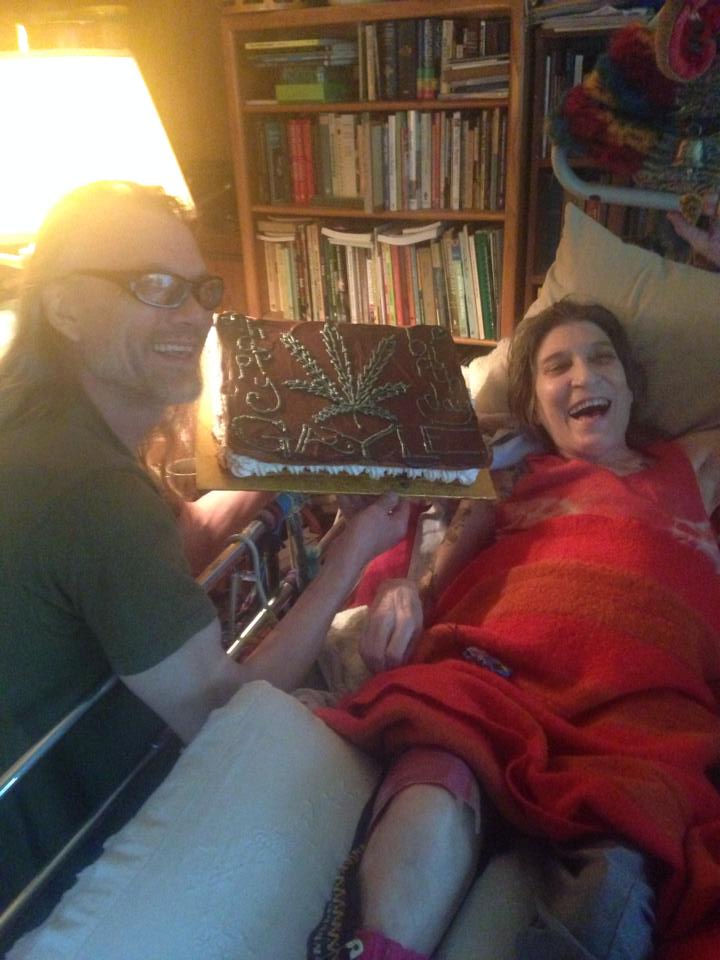 As for my love Gayle Quin, please read the full length article I have written for this issue explaining some of the details of her incredible struggle. Using cannabis to keep her alive has deeply confirmed my commitment to this plant, and given me profound respect for its healing properties. Every time I write these updates I am constantly thinking of her, as writing them used to be her job. Indeed, this paper might not even exist without her input and encouragement.

Recent changes at the Victoria Cannabis Buyers Club have found me as president of the board of directors, with Brandi Woods, who has worked at the club for over 9 years, as general manager. We greatly appreciate all of the work Dieter MacPherson has done over the past few years; he has lead the club in both roles since 2012, the year it was turned into a non-profit society. He will remain as a consultant of the organization, as his role as president of the Canadian Association of Medical Cannabis Dispensaries has given him an important job for everyone in the industry.

There will be some changes occurring now that I have the reigns back in my hands, including more community events for the members to be involved with. Whether it will be participating in public fundraisers like the Walk For MS, Terry Fox Run, the TC 10K, or other events like the Pride Parade and Earthwalk, we want to become fully engaged with our community, and give our members plenty of opportunities to represent our group. Of course, we also hope to have more events for members only, so keep an eye out for posters.

Coming up next is the 2nd Annual Team 420 Dodgeball Tournament on Aug 20th. This year we are hosting the event by the bandshell in Beacon Hill Park, mostly because Tent City has taken over the back lawn of the courthouse. We had a great time last year, and thanks to our sponsors there were even trophies for the winners and most valuable player, which we handed out at the Hempology 101 anniversary, the next event we organized. 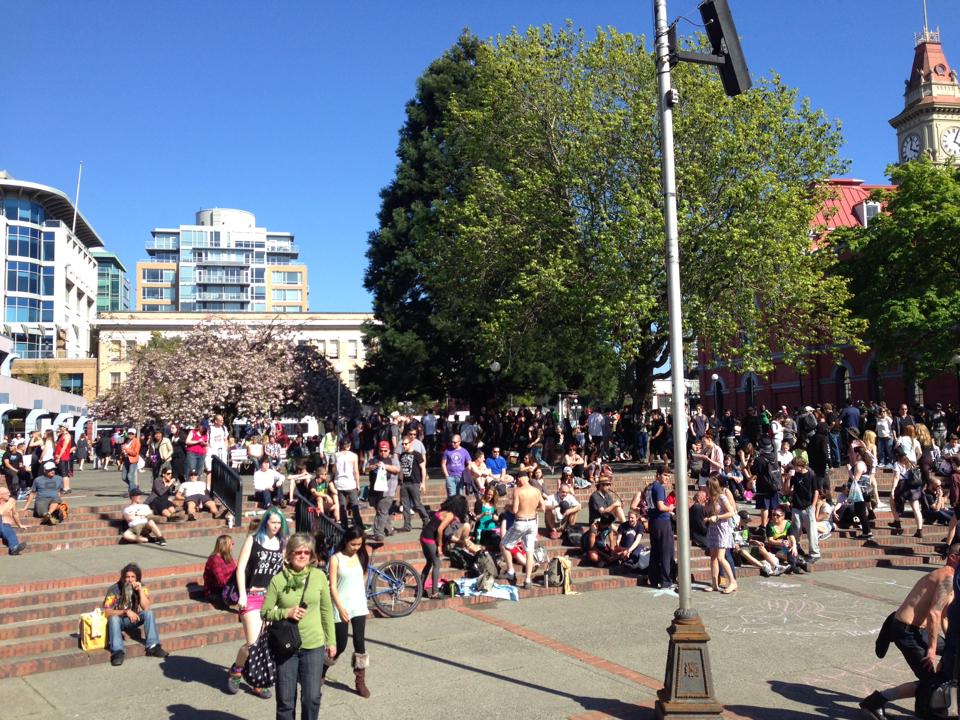 On Sept 7, 2016, the International Hempology 101 Society will be marching from City Hall to the Provincial Legislature to mark 21 years of cannabis activism in the Victoria. This annual march starts at 7pm at Centennial Square. It is always a lot of fun to gather on the front steps of the beautiful legislature building, and smoke a few joints.

Of course in September, the University of Victoria Student Society’s Hempology 101 Club also starts the Wednesday 420 circles back up in the center of campus, and the Hempology 101 club at UBC gets back to being full active too. This could be the year the UBC club gets bigger and more active than UVic, even though the UVic 420 circles have been going on since 1998. Hopefully more students will be interested in starting Hempology 101 clubs at their schools as legalization sinks in, but for now we are happy having these two clubs active.

Everyone with the Cannabis Digest is super stoked to be on the verge of printing issue #50.

Please read my publisher’s note to get caught up on our plans to improve our newspaper and please consider helping distribute if you can afford a few dollars for shipping, or better yet get your local dispensary to get listed in our newspaper so you can pick it up there.

Next article Compassion In The Nation’s Capital, Finally

Al Graham·July 22, 2013
There are no comments yet No comments

What is Rick Simpson Oil or RSO?