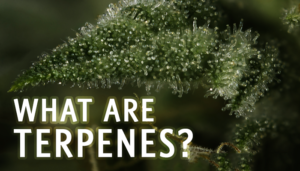 When it comes to choosing our medicine one of the first things we consider are the plants genetics and whether it is more “Indica” or “Sativa”, but what if I told you that the terpenes present in a strain were arguably more important?  Studies have shown that terpenes contribute to the entourage effect by working together to help cannabinoids pass through the bloodstream and “lower the blood-to-brain barrier, basically acting as a moderator.

When it comes to cannabis genetics nowadays, nearly everything on the market is going to be a hybrid with the occasional land race or heirloom strain popping up.  Strain genetics can be lost in translation while terpene profiles and chemotypes are constant and can be tested for with standardized scientific equipment as well as recognized by the human nose with a little training. In this article, I will lay out the main terpenes, explain their benefits and how to recognize them in your favorite strains.

First is pinene, which is the most common in the world around us and smells like pine.  It has anti-inflammatory properties and has also been known to promote alertness, increase airflow to the lungs, as well as counter the short term memory loss due to THC.  Other plants that contain pinene include basil, parsley and even orange peels. Some strains rich in pinene include Jack Herer, Romulan, Island Sweet Skunk, Strawberry Cough and Trainwreck.

Next is myrcene which is the most commonly found terpene in cannabis and can account for up to a whopping 50% of a strains terpene profile.  It’s smell has been described as earthy, musky, skunky and fruity. It has shown promise as a sedative, a muscle relaxant and also has anti-inflammatory properties and is also partially responsible for the “couch lock” feeling in higher concentrations.  Myrcene is also present in hops, thyme and mangoes. Many “indica” strains have high levels of myrcene, which contribute to the stoned/tired feeling.

Limonene is a fairly common terpene found in “sativa” dominant strains and, as it’s name suggests, smells like citrus fruits.  It has been known to relieve stress, elevate mood and has anti-fungal/anti-bacterial properties as well. It also facilitates absorption of other terpenes and cannabinoids throughout the body including the skin which makes it a great addition to topicals.  Strains found to be rich in limonene include Cinex, Cookies and Cream, Super Lemon Haze and Lemon Walker.

Humulene has an earthy, almost grainy smell and is found in other plants such as hops, cloves and coriander.  It is best known for its ability to suppress appetite while most cannabis strains give us the dreaded munchies.  It also has anti-inflammatory as well as anti-bacterial properties. Cannabis strains known to contain humulene are Headband, Thin Mint Girl Scout Cookies and Gorilla Glue.

Another fairly common terpene is linalool, which has a floral and subtly spicy scent to it.  It has many benefits including stress and anxiety relief, anti-depressant/anti-inflammatory effects, and some studies suggets it may boost the immune system.  Linalool is commonly found in lavender, rosewood, birch trees and many tropical plants. Strains that have been known to contain linalool include LA Chocolate, Pink Kush, Amnesia Haze and Master Kush.

Lastly, there is caryophyllene which is a peppery or spicy scented terpine found commonly in black pepper, cinnamon leaves and cloves.  Studies have shown it to be helpful in treating anxiety and depression as well as having anti-inflammatory properties. It was recently discovered to be one of the first non-cannabinoids to directly activate cannabinoid receptors as well.  Strains rich in caryophyllene include Super Silver Haze, Rockstar and White Widow.

There are dozens more terpenes found in smaller concentrations in cannabis, each with their own benefits and contributions to the overall experience for the end user.  Terpenes are the reason that you can smell a certain jar and instantly say “That’s the one!”, so next time you are choosing your medicine remember to follow your nose! 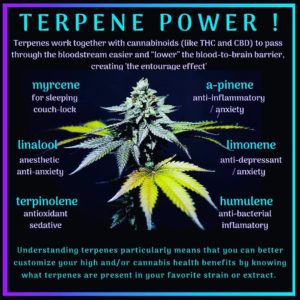 Ted Smith·May 27, 2019
There are no comments yet No comments

Mulcair, Marijuana, and the NDP

Will Owen Smith Change The Law On June 11?