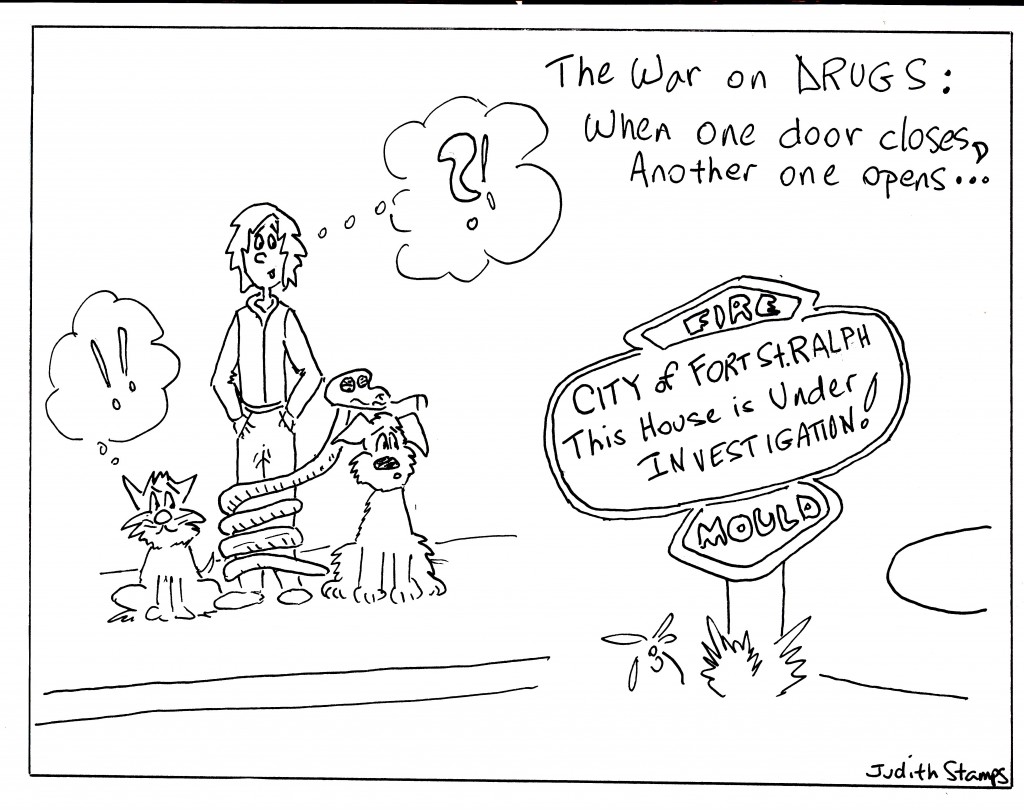 Since the late 1990s, indoor cultivation of marijuana has been a constant focus of attention by the RCMP units that comprise the civil police for 62 out of 74 of BC’s municipalities.  Through their reports, these units supply the crime information most heavily relied upon by mainstream media.  In this way, they paint the portrait of marijuana that British Columbians encounter most often.  Today’s blog describes the structural, or fixed, aspect of this portrait as described in Susan Boyd and Connie Carter’s new book, Killer Weed:  Marijuana Grow Ops, Media and Justice.  BC, they argue, is in the midst of a media supported, specialized drug scare: ‘the grow op scare.’  This argument is based on their analysis of 2,524 articles published from the years 1995 to 2009 in The Globe and Mail, The Province, the Vancouver Sun and the Times Colonist.  In what follows, we look at the logic that underpins this scare.

We begin by asking: What drives the focus on growers?  Boyd and Carter’s reply is that public opinion on marijuana has been softening for a couple of decades, especially in the matter of individual use.  It is difficult to malign pot fans that are otherwise indistinguishable from one’s neighbours.  It is harder still to malign the celebrities that seem to ‘come out’ every other day.  It is easy, though, to target growers.  Growers are hidden from sight and are, as a consequence, an exotic unknown.  They are the perfect counterparts to a public that can be led to believe almost anything.   It is on this foundation that the  ‘grow op’ scare is built.

But it could not have been built without journalists, and so we ask next: Why have they been led so easily?  The short answer is: Money.  Over the past few decades, private newspapers have experienced declining revenues and accompanying budget cuts.  Too many have needed to amalgamate, so every year we hear fewer distinctive voices.  They now rarely employ their own investigative reporters, and so rely heavily on ‘ready to serve,’ on-line stories; even fewer voices.  They are eager to take free, easily available offers from sources that seem legitimate.  Hence the appeal of RCMP reports.  Similarly, government cuts to public broadcasters, and to research budgets at universities and elsewhere, have diminished our access to independent reporting.   What remains is a media environment that is poor in substance, but rich in opportunities for scare mongering.

The ‘grow op’ scare is a modern day spectacle.  At its core is a freakish caricature of indoor plants, and of their planters and caregivers.  The caricature is drawn from a series of elements, each of which distorts, and sometimes invents, some part of the setting.  They include:  infiltration by organized crime; infiltration by too many Asians; theft of electricity; inadequate wiring, resulting in fire and electrocution; and poor growing practices, resulting in moulds and noxious fumes.  Growers are described as armed, dangerously sophisticated, and bewitchingly successful.  Their plants are portrayed as magnets for plant thieves.  Their numbers are said to be accelerating in plague like fashion.  They are said to threaten the health of the children, the safety of neighbourhoods and the integrity of civil society   In the year 2005, 40 children in BC were seized from their homes by social services.  One headline read:  “Cops find kids being kept in drug houses.”  A reporter for The Province claimed to be quoting from an RCMP funded study of children found in grow ops.  There is no such study, and there never has been.

There are, however, two studies of consequence, funded by the RCMP and completed in 2002 and 2005.  They are cited extensively by the Canadian media and, more importantly, they continue to inform government policy and law.  Their lead author is Dr. Darryl Plecas, RCMP university research chair in crime reduction.  The most sobering fact about these studies is that the authors’ words contradict the numbers they provide.  For example, Plecas and his colleagues exaggerate by 17%, the number of grows known to the RCMP, and by 100%, the increase in these grows from 1997 to the year 2000.  They distort their numbers by conflating categories:  they add alleged grows and confirmed ones in a single column.  Worse, they call for a ramped up, punitive police response while, according to their data, 89% of grows examined during their study period contained no hazards at all.   In short, they count, add apples to oranges, and then magnify.

In a balanced system, newspapers would provide a counterweight to these distortions.  Instead, both the BC papers and The Globe and Mail echo them, and then add a few curves of their own. There are number curves.  These include: stressing the number of plants found; counting the hazards found; and a favourite—citing exaggerated figures on the plants’ street value.   Headlines that read, “Biggest Bust Ever” convey the notion of an advancing tidal wave.  Then we get language curves.  The worst of these is the phrase, “grow op.”  Why not “garden?”  We are bombarded by words like “massive,”  “deadly,” “toxic,” and “gang-related.”  We are stunned by headlines like, “Pot Thieves Bring Terror in the Night.”  We are muddled by the newspaper’s narrative style.  Marijuana stories, Boyd and Carter note, follow a three-part pattern.  They begin with a report on a bust.  They proceed to quotations from the latest RCMP report.  They finish by reminding us of every element in the caricature, even in cases where none was present. They provide, in brief, a cartoon.

Since 2005, matters have worsened, primarily because new cartoonists have signed on.  These now include mayors, Home Insurers, BC Hydro representatives, fire chiefs, and the BC Liberals.  Their participation has changed the nature of the game.  In 2005, the municipality of Surrey piloted a “multi-partner initiative,” entitled the Electrical and Fire Safety Initiative (EFSI).  Present at the planning meeting, besides those listed above, were representatives from the BC Ministry of the Attorney General and the BC Safety Commission.  All parties agreed that the courts were not doing enough to eliminate ‘grow ops.’  The EFSI, an attempt to fix this problem, worked as follows.  BC Hydro Authority kept a record of households whose electrical use had increased, and passed the records on to the local RCMP.  Residents selected by this process were given 48 hours to allow a safety inspection of their home.  If they did not comply, their power was turned off.  Signs could be placed in front of their homes, indicating that it was under investigation.

The BC Liberals, then under the leadership of Gordon Campbell, provided the fifty thousand dollars needed to pay for this project.  Supporting facts for the EFSI were taken straight from the RCMP reports described above.  Press coverage was positive; no one seemed alarmed.  Later that year, Surrey Police Chief, Len Garis, added his own bias by producing an influential report entitled: Eliminating Residential Marijuana Grow Operations—An Alternative Approach.  After replaying “the facts,” Garis called on the Liberals to provide enabling legislation.  In 2006, the government complied by passing The Safety Standards Amendment Act.  The Act permits local governments to obtain information on electricity consumption from the BC Hydro and Power Authority, and to share that information with local police.  Pamphlets now abound, telling residents how to spot a ‘grow op.’ As of 2012, nineteen municipalities had endorsed the program.  For prohibitionists, the ‘municipal safety’ issue has opened a new door.

So there we have it: the ‘grow-op scare,’ an evolved, intensely localized phenomenon that eludes federal law, or tries to, and appears positioned to drive its targets to the wall.  There are, however, new lights in the realm.  There have been court challenges to the EFSI, and some municipalities have begun to balk.  The press has taken notice.  There is trouble in Safety Standards paradise.  In addition, Killer Weed’s author, Susan Boyd, has contributed her expertise to the court challenge that has halted, for the moment, the complete discontinuation of personal gardens, the Canadian Government’s latest volley in Canada’s medical marijuana war.  In Weedy Blues, Part II, we reconsider the media landscape in the light of these newer events.  Stay tuned.

Previous article A History of Marijuana Law in the USA

the Triumphant Return of Marc Emery, the "Prince of Pot"

CANNABIS CLUBS ACROSS CANADA AND THE U.S.A