With medical cannabis dispensaries opening up in cities across Canada, there is no general consensus on how they should operate. While illegal under federal law, they have been repeatedly vindicated by the courts for filling essential gaps in the federal medical marihuana access regime. Some municipalities are now crafting bylaws to regulate the impact these stores have on their communities. In West Kelowna B.C., Amanuel Ghebremicael has helped put a new twist on the dispensary model. Vital Alternative Healing Association is a registered non-profit society serving chronically and terminally ill Canadians who have been prescribed medical cannabis. 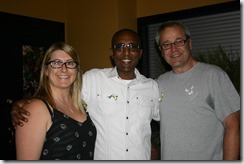 A chef from Saskatoon, Ammanuel is a 38 year old Multiple Sclerosis patient. While waiting to see his neurologist, Ammanuel wasn’t able to stand, his hands were curled up and his skin felt like “it was on fire all the time”. He was prescribed a very high dose of steroids which caused him to become hyper sensitive and emotionally stressed. He found an Indica strain that helped relieve his pain and calm him down. He attributes much of his return to health to “tears, prayers and lots of cannabis” although he feels post traumatic stress from the initial attack of Multiple Sclerosis.

Amanuel’s neurologist would not sign his MMAR forms. He sourced his cannabis from the street until he brought his medical documents a Kelowna medical cannabis dispensary. He got a job there but after some time found thatit wasn’t the kind of environment that he felt comfortable in. He felt that the smoky ambience was less approachable and sometimes not as appropriate for patients as would be a clinical space. He described it as like “going into the basement of a frat house”. When I began working at the V-CBC in 2008, the dispensary had a similarly smoky living room feel but has gradually become more of a streamlined clinical environment.

With only a few other dispensaries in and around Kelowna, it is not the hub of cannabis culture that we see in Vancouver and The Kaya Clinic was recently shut down for improper business licensing.  Undeterred, Amanuel drew up a business plan and sought approval for a new dispensary, but was denied by the city of Kelowna. Moving to nearby West Kelowna, he had more success and formed the Vital Alternative Healing Association (VAHA) to “provide clinical and education information about the therapeutic benefits of cannabinoid treatment in order to empower Canadians to make informed health decisions” and Vital Compassion Club to dispense cannabis.

He paid a $112 license fee, set up in an industrial area far from a school, youth centre or another dispensary and hired a security company licensed by Health Canada. VAHA’s business license was approved after it passed the building inspections, however West Kelowna recently introduced bylaws to allow them to refuse a business license that is in contravention of federal law. This move may essentially prevent new clubs from opening. Although VAHA were issued a business licence as “a private members club for medical marijuana”, next year when he seeks to renew it, he may have to change his business model to fit the code.

At only 1 month old, VAHA operates as a medical clinic with the Vital Compassion Club dispensary next door. The clinic is like a doctor’s office, clean and quiet, where patients can have one-on-one consultations and become educated on how to use medical cannabis by onsite professionals. They provide access to nurses and doctors with knowledge of medical cannabis who can provide an independent medical opinion based on your diagnosis and instruct you on whether cannabis use is appropriate. After being processed through the clinic, the patient goes next door to the Vital Compassion Club to pick up their cannabis.

The dispensary only serves patients who have been diagnosed by a Medical Doctor. They don’t accept the membership cards of other clubs unless they have an agreement that they share the same strict threshold for membership. They provide members with dried cannabis as well as a variety of edible products. As a chef and a patient, Amanuel is keen to move away from common sweet treats like suckers and gummy bears, toward wholesome foods with ingredients that are better suited for patient diets.

Amanuel would like to spread VAHA clinics to cities across the country as a service to nearby dispensaries and licensed MMPR Producers. As strictly an educational service he doesn’t predict any difficulty setting up these clinics that he hopes will help medical cannabis come out of the shadows. He plans to open a vapor lounge and is thinking of how to bring vaporizers to senior care facilities to help teach elderly patients about the safe use of medical cannabis.

Listen to my interview with Amanuel on Time4Hemp radio here

Next article Cannabis and the Federal Leadership Debates

Owen Smith·November 4, 2012
There are no comments yet No comments