Deprecated: The $control_id argument is deprecated since version 3.5.0! in /home/oq5ayjaeetjt/public_html/wp-content/plugins/elementor/modules/dev-tools/deprecation.php on line 304
 6 Reasons Why You Should Give My Friend Owen Your Money - Cannabis Digest
Skip to content 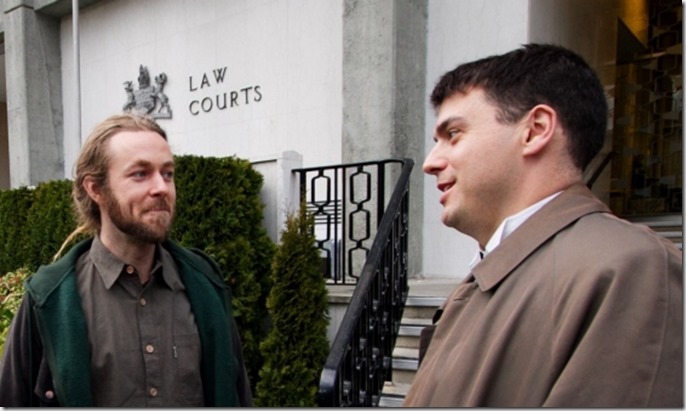 (Owen Smith and Kirk Tousaw at the Victoria Courthouse)

It is not often that I send out a plea for money for someone other than myself, but I’m nothing if not an adventurous soul, so I thought I’d take a wack at it.  Now, be prepared my lovely Digest readers because I’m famous for my sugar coated tongue and it’s ability to sweet talk all kinds of things into my possession.  A gift developed during the rock n roll days of the mighty KingBong, musicians are always sweet talking everyone from promoters to seedy label types for anything and everything that they can get. Being deeply in debt and poor does that to you, oh and it kinda helps with girls too. So, fair warning, better lock your wallet away unless you are prepared to give some money to my friend Owen, because he needs it, and I’m about to tell you why.

Unless you have been under a rock for the last few years you have heard all about my friend Owen Smith and his battle to free cannabis extracts. He and my boss Ted Smith have been busy little beavers on this issue rattling cages all the way to the supreme court of Canada.

I don’t have tell you that supreme court cases don’t come cheap. On an emotional level or on a financial level for that matter. My friend Owen has been paying the price on his end in terms of bearing the hardship of activism that sometimes falls on the sturdy shoulders of those activists who can carry the immense weight of it.  If anyone has carried their share of the weight it’s Owen Smith, who could very likely become the man who actually breaks the prohibition and frees the weed. The government is quickly learning that there are more ways than one to trim a plant and their plant is bout to get trimmed up yo! So following below are six reasons why you should dig into your sock drawer and take out the cash you have been saving for a cool new vaporizer and send it to Owen right away.

1. It’s your shot at history

That’s right, I said it, here is your chance to participate in what may prove to be one of the most important supreme court cases ever heard before the nine.  Think about how proud you will be when you tell your kids you helped fight for sick people to have the medicine that they need. You’ll be a hero for potentially saving the lives of thousands of sick Canadians by simply whipping out that credit card and sending a few bucks to my friend Owen. Remember hero’s get treated really well and almost always get a extra piece of pie for desert.

2. Owen Smith is a nice man and the Canadian government not so much.

Having worked with Owen for a little while now I can happily report that he has shown no signs of being a jerk, a creep, or anything but a friendly cooperative chap. I even asked around and every person I talked with said that Owen was a nice man. When I asked the same question about the Canadian government to the same people, they became rather agitated and began throwing around some pretty strong language fully supporting my assertion that the Canadian government is not that nice.

3. Peoples lives depend on the outcome of this case.

Seriously, it’s true,  it’s a sobering thought, and a very heavy responsibility to hang on my friend Owen. After all we are in this struggle together and while I’m sure each and every one of the loyal CD readers would stand up in his place, fate has chosen Owen to see this through. He’s our guy, our champion, and he should be treated well for his sacrifice. He shouldn’t have to beg to scrape together a few measly dollars to eat and get around Ottawa while helping save the lives of hundreds of Canadians. A couple of bucks from each reader would change that. Owen is fighting for all those lives, doing the things that as activists we are supposed to do to make change in this world. I can assure you that there is little money in activism, and last time I checked the commission from saving the world is not as large as it once was.

4. Send a message to Steven Harper with your dollars.

If you’re like me and think our PM is not the absolute best guy when it comes to anything except perhaps accounting, here is your chance to take a shot at him! Helping to fund Owen and his case is upsetting Harpers’ plans to hammer down on the nasty potheads causing all the  trouble in our country. This will in turn get all the zealots in the conservative party breathing fire and brimstone in his direction because he is letting society slip from the 1950’s into the 21st century. A well funded effort also shows the other guys we are serious and not just a bunch of hippies, even though we are really a bunch of serious hippies.

Wow, wouldn’t it be nice to be done with this issue forever? I don’t know about you but after some 20 years of marijuana activism I’m a tad bit tired. I’m tired of the same old lies and propaganda and I’m tired of the endless legal dancing in order to force the government to do it’s job and give the people what they want. My friend Owen could actually push that legal door open that won’t close. A couple of bucks to be able to use cannabis without fear seems cheap at any price for me. A couple less Starbucks latte’s and you never have to worry about being busted with extracts again….hmmmmm .

Oh ya babies, I saved the best one for last. Do you know how many sick kids currently benefit from cannabis oil? Can you imagine how many more it will help to live normal lives? We are talking about some really sick kids here people. Kids that experience constant seizures to the point of having little to no function are transformed into normal kids by a few drops of extract! Cancer kids eased from the horrible sickness of chemo. Kids with MS and MD, anxiety disorders, eating disorders, HIV/AIDS, and countless undiscovered illnesses that may be controlled or eliminated by a simple oil extract. A few bucks from you to Owen will insure that those sick children will find relief and possibly a cure.  If helping sick kids doesn’t move you to dip into the cookie jar then your heart is harder than mine friend.

So, pony up activists. Hit up your friends, neighbors, even your Grandma for a contribution because you can actually make a difference in the world here with a simple donation. This case affects us all, we all know someone who will benefit from the many miracles offered by the plant. We all want an end to the government intruding into our lives and treading on our human rights. You can easily donate online through Owens gofundme account, Cannabis Extracts in Supreme Court, or you can also donate directly to the V-CBC at 826 Johnson St.Victoria, B.C. V8W 1N3, either way your support is desperately needed and greatly appreciated.

If you didn’t attend the 2016 ICBC (International Cannabis Business Conference) in Vancouver BC, you missed some fascinating speakers on the cutting edge of the international cannabis movement. Thankfully, Canlio sponsored me to make the following series of videos, giving those unable to attend an opportunity to watch and learn. The Cannabis Entourage Effect; Cannabis and Addiction; and […]

By Ted Smith There are five general types of cannabis grown for a variety for reasons.  Recreational users will recognize the terms indica and sativa which are used to tell the difference between the effects and how the plant grows.  Hemp also has a wide variety of strains, depending upon the intended use and growing […]