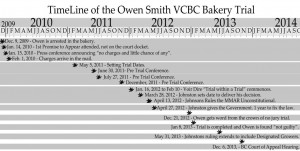 By Ted Smith A huge sigh of relief swept through the courtroom when Justice Johnson quickly announced the Marijuana Medical Access Regulations were unconstitutional on the morning of Fri. Apr. 13, 2012, in the case of Owen Smith, former head baker for the Cannabis Buyers Clubs of Canada. It was not a surprise. Shock struck […]

A sister’s fight with skin cancer, and a cure the government won’t acknowledge By Owen Smith In previous articles I’ve focused on the edible and topical products at the CBC of C—how they’re made, tested & developed in the context of an unlicensed Canadian cannabis dispensary—but in this article I’m going to step back from […]