Deprecated: The $control_id argument is deprecated since version 3.5.0! in /home/oq5ayjaeetjt/public_html/wp-content/plugins/elementor/modules/dev-tools/deprecation.php on line 304
 Catching Up With Sensible BC - Cannabis Digest
Skip to content 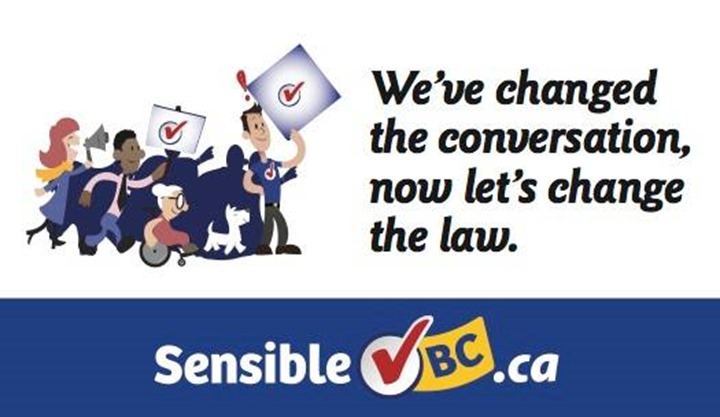 Back in the fall of 2013, Sensible BC led a heroic attempt to make use of British Columbia’s Recall and Initiative Act to force a referendum on decriminalizing cannabis in BC.  The Act called for the signatures of 10% of the voting public in each of BC’s 85 electoral ridings.  Volunteers failed to collect that many.  But they did collect over 220,000, a figure that would have won them a place on any state ballot initiative in the US, or on similar ballots in every place in the world outside of Germany.  This figure was especially remarkable as, unlike its American counterparts Sensible BC was not allowed to use paid canvassers.  Led by key activist Dana Larsen, the organization cultivated some excellent ongoing volunteers, raised public awareness, and created a new and powerful pro-cannabis presence in Canada.

During the winter and spring of 2014, Sensible BC began transforming itself into an organization with a broader political mandate.  Its first task was to respond to Health Canada’s (HC) attempted assault on medical growers.  In a press release sent out on March 14, 2014, HC announced that it had ordered all patients licensed to grow medicine under the Medical Marihuana Access Regulations (MMAR) to destroy their crops, and send in a ‘destruction’ report.  Failure to report, patients were told, would bring the RCMP to their doorstep.  They were to be forced to buy Government Grown only.  On April 1st Sensible BC held a Day of Action in which volunteers ‘contacted’ Minister of Health Rona Ambrose.  They jammed the phone lines and over 8 hours, sent 3,500 emails; volunteers wrote letters to HC, and many wrote letters to the editor.  They got media attention, and sent Canadians a clear message.  There were no real grounds to ban home gardens, and new rules were simply hurting patients.  An injunction currently allows those originally licensed to keep their gardens, and with the help of BC lawyer John Conroy, the case for home gardens is working its way through the courts.

Sensible BC set about next to influence the BC civic elections held the following November.  They sent questionnaires to prospective mayors and city councillors, identified cannabis friendly candidates, endorsed them, and made the lists available to prospective voters.  Dana & Co. decided especially to focus on the mayoral race in Nelson BC, where candidate Deb Kozak was attempting to unseat conservative, John Dooley.  In 2003, Nelson had seen only 2 arrests for cannabis possession.  But in 2006-2011, that figure had jumped to 117, and it looked as if there was a chance to improve matters.  In the days before the election, Sensible BC volunteers called every landline in Nelson, encouraging people to vote for Kozak, and for other sympathetic candidates.  Sensible BC organized robo-calls as well.   Debates will continue over Sensible BC’s influence in Kozak’s victory, but local organizer Herb Couch believes that for the city council overall they had a real impact.  For Larsen, this event stands as a template for the organization’s next goal:  influencing Canada’s federal election, due in the fall of 2015.

Between these events on October 3-5 2014, Sensible BC hosted a conference at Simon Fraser University’s downtown Vancouver campus.  Over 200 participants from around the province took workshops on canvassing tactics, campaign management, Nation Builder (an online tool for political campaigns,) communication skills, and public health perspectives.  They listened to and participated in forums on legalization and cannabis futurology.  The management and communication workshops in particular reflected Sensible BC’s attempts to learn from past mistakes.

Some of those mistakes centred on recruiting and maintaining volunteers.  I know; I worked on the campaign in Victoria.  The signatures on the 2013 petition, while impressive in number, were collected by small groups working absurdly long hours.    There were pamphlets and written instructions to canvassers, but they didn’t help much.  Most people started, then drifted away.  Organizers never knew why and mid-campaign they were too busy to find out.   Nick Whitehead, volunteer coordinator at Sensible BC studied the problem.  He read and listened to feedback from participants, attended management courses, and subsequently lectured on the subject at the conference.  Here is sample of what he had to say.

Solid recruiting, he noted, starts with one on one conversation.  When someone volunteers, you as a coordinator meet them for tea, find out what has motivated them, what their skills are, and how much time they have available.  You explain the goals of your organization, and invite them to join you in a campaign activity.  Of course, you must have one planned.  If that goes well, you invite them to another.  If they seem keen, you ask them if they would like to take on a leadership role.  If they do, you meet with them and other leaders regularly, and phone them weekly to see how they’re doing.  As issues arise, you work together to resolve them.

As the following anecdote shows, Whitehead’s advice stands in stark contrast to the experience here in Victoria.  In the fall of 2013 we had a charming volunteer, a soft-spoken senior citizen complete with fluff-ball pooch.  They were collecting signatures in Centennial Square, a public space.  Maintenance and security staff kept trying to chase them away, although they had no right to do so.  The man stood his ground for a few days, but the experience was intimidating, and he told us clearly he needed someone to stand with him.  We had so poor a grasp on our volunteers that we could find no one to help.  Within a few days he brought in what signatures he could, and left.   We had never gotten to know him; we never saw him again; and I can’t remember his name.  This experience lingers as my template of what not to do.

Still, the mind boggles at Whitehead’s one on one plan.  Where does one find leaders with so much time for tea and volunteer cultivation?  And what’s the time frame?  A year?  The election is 6 months away, and no one around here seems to me taking me out for tea.  Maybe it’s just that Victoria has not been chosen as the next hub of activity.  Or maybe they think I’m already hooked.  And isn’t this tender loving care modeling a tad artificial?  Maybe it’s just me.

Another facet of Sensible BC is creative communication.  Tammy Lee Meyer, communications planner at Sensible BC has a new plan, not a conference and not a news release.  For Meyer people are moved most by personal stories.  In the near future she plans to co-create a Canadian cannabis tapestry: a series of written and/or videoed tales that provide Canadians and others with a sense of the fine texture of life in prohibitionist Canada.  The series might include stories about medical breakthroughs, run-ins with law enforcement, or positive changes to people’s lives brought about by the plant.  Her immediate task is to recruit writers and image-makers to find people who have stories to share, and to help write or otherwise produce them.  The tapestry would be made available on social networks and offered to mainstream media.   It would enhance our understanding of Canadian activism, and it would be just plain fun.  Indeed, I’ve agreed to help.

Currently Sensible BC has 166,852 members, 12,000 of which have indicated their desire to volunteer their time.  Of those about 300 are proven participants.  Larsen’s plan is to rely on some of these to help keep as many Conservatives as possible from representing BC after the fall election.  The Liberal Party of Canada has been the most outspoken of the mainstream parties on ending cannabis prohibition.  But Sensible BC has chosen to take a strategic, non-partisan stance.  This stance is partly in response to the fact that the members belong to a variety of parties.  But more importantly it is a response to BC’s polarized politics.  Except for a few ridings in the lower mainland where party affiliation is balanced between Canada’s main parties—Conservative, Liberal, NDP—most regions in the province vacillate between two dominant parties only, with the others far behind.  But they are different in different regions.  In BC’s interior and on Vancouver Island, for example, the Conservatives square off against the New Democratic Party (committed, its leader says, to decriminalization.)  In the Fraser Valley, it’s Conservatives versus Liberals.  In Sensible BC’s view, if the goal is to elect as few of Harper’s clan as possible, the key is to endorse ‘the other guy,’ male or female, regardless of party.

As in the civic elections, Larsen intends to send ‘attitude on cannabis’ questionnaires to all candidates, in order to provide an informative database for BC voters.  Beyond that, Sensible BC plans to target swing ridings, places where Conservative MPs and their traditional opponents are separated by less than 2,000 votes.  For those ridings multi-media campaigns will reach out to undecided voters, providing them with useful data and an incentive to vote anything but Conservative.  The ridings haven’t been chosen yet, but we’re bound to hear about them soon.

Meanwhile, I end this blog with a confession.  There is one plan that—as a Sensible BC member—I ponder with dread.  Larsen has suggested that in the absence of progress in cannabis law reform on the federal front, he would prepare for another run at a BC petition.  The 2013 campaign was a worthwhile project.  It was new.  And it was exciting, even when things weren’t working out.  But BC’s Recall and Initiative Act is fatally flawed, and no matter how much syrup I pour onto my recollections of the campaign, it was a plunge into the icy lake of insurmountable opportunities.  Having since dried off and warmed up, I don’t think I can do that plunge again.  Maybe I’ll just blog my way through it.   I could bring snacks.  Other than that, it’s a great organization.  Don’t hesitate to join.
1 http://metronews.ca/news/vancouver/1294170/constitutional-challenge-of-canadas-medical-marijuana-laws-begins-in-vancouver/

One of the most wonderful things my love, Gayle Quin, has created is Poppy-pot.  Now most of you have never heard of Poppy-pot because we have never sold it and it only seems to be available once a year.  We are about to change that.  Poppy-pot should be available every day. Until now, one could […]