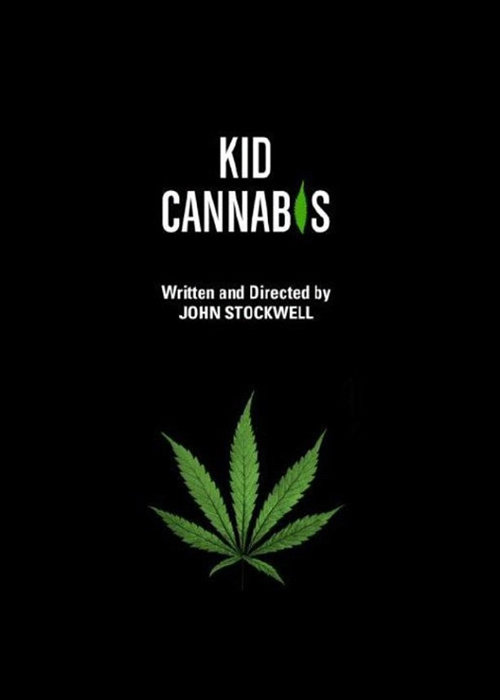 They came with big trucks, trailers, and even a food tent. They dominated the parking in front of the Cannabis Buyers’ Club in Victoria, and all down Johnson st. They came with lights and cameras and were looking for some action. The big screen had arrived and wanted to use the club as a location for one of their shoots, and more.

Kid Cannabis is an independent “crime teen dramidy thriller” based on the life of Nate Norman from Coeur D’Alene, Idaho. Norman, played by Johnathon Daniel Brown (Project X), was an 18 year old high school dropout who with his 27 year old friend Topher, played by Kenny Wormwold from Flash Dance, hatched a plan to make some dough. Together they created a multimillion dollar drug smuggling ring that brought fine B.C. bud from the interior to their hometown in Idaho.

This has been a project of dedica tion for director and screen writer John Stockwell, who first began research on this film in 2005 when he optioned “Kid Cannabis: How a Chubby PizzaDe livery Boy from Idaho Became a Drug Kingpin” written by Mark Binelli featured in Rolling Stone, and “Dreaming in Green” written by Kevin Taylor published in The Pacific Northwest Inlander. It is reported that he also met with FBI Agents, and Norman in prison as part of his research.

Corey Large, the Victoria native who made his 2005 comedy White Widow here, was happy to be back to make this movie. Large also plays the role of Giovanni Mendiola, a Peruvian hitman in the film. Kid Cannabis is also produced by Large’s production company, Wingman Productions.

Even though there are less tax incentives involved with filming in B.C., Large felt that it was worth the trade off for the friendly helpful atmosphere. “I kept thinking, ‘It takes place in B.C., so why would I help Ontario?’, “ he told the Times Colonist in July when he confirmed that Kid Cannabis would be filming here.

The film spent 24 days in Victoria filming at different locations, including Prospect Lake and Shawnigan Lake. They also used other locals in the film including local CTV Newsreporter Adam Sawatsky, and camerman Brendan Strain to play a reporter, and cameraman.

The scene being filmed at the CBC of C was of a point early on in Norman’s career. Having heard that Nelson was the mecca of B.C. bud, he found himself at the Holy Smoke Culture Shop in Nelson. With a little of that movie magic the CBC of C became the Holy Smoke, and some of our favorite faces became a part of the scene.

Nate is greeted to the club by our very own lovely Gayle Quin, at the beginning of the scene, from behind the front desk as he walks in the door. The shot then follows him through to the dispensing area. The smile of Minneh Bushby that

usually greets us from the front desk can be seen in the background along with the other local extras.

Ted Smith, founder of the CBC of C, was originally cast as the “sleazy drug dealer” but his role was later changed to the “guy behind the coun ter.” Honored to be in the movie in any role, it wasabitofaletdownas he had already embraced the previous role and

was expecting to have a lot of fun with it. “It (turned out to be) the biggest break in my activist career so far,” Ted told me a few weeks after the shoot, still elated from the experience. Originally the script called for a few lines from the “guy behind the counter” which was a smaller part than the “sketchy drug dealer,” but the role expanded as Ted improvised what the role was calling for. This was well received by Stockwell who has a reputation for encouraging actors he works with, and he kept instructing Ted

to expand what he was saying. “It wasn’t even acting. I just spoke to

them as I would any member. I just removed the word medical.” At one point in the scene, one of the actors improvised “wow, you know a lot about cannabis” to which Ted replied “I even wrote a book on it,” and pulled out his Hempology 101 textbook. This opened the opportunity for Ted to expand even further, by talking about the uses of hemp as food, fuel, and fiber.

It was an unexpected turn of events, what seemed like just a fun thing to be involved in turned into an unbelievable opportunity to promote Ted’s work with Hempology 101, the textbook, and even Team 420, as Ted was wearing a team 420 shirt for his part in the scene. On a larger scale, it was an opportunity to educate to a broader audience who may still be unaware of the vast uses, and huge implications cannabis-hemp prohibition.

Ted is already looking forward to the films release in 2013 and expects that it will boost the sales of the Hempology 101 textbook over the long term. In all, the shooting took a couple of hours, a time investment that will have a long term pay-off for years to come.

Using the film in Hempology’s movie nights will be especially fun, and will likely draw more to attend. “The most exciting night will be when the movie premiers,” Ted told me as he speculated that it would be an exhilarating event, attended by Hempology Club members from Victoria, but also in other locations like Naniamo, Vancouver, and New Brunswick.

(Title image: Vancouver Sun) (This is part of a series of blogs by Owen Smith on the Medical Cannabis Extract Trial) On a cold December morning, 4 years after my arrest, I attended the BC Court of Appeal to witness the oral arguments of the two crown prosecutors and my lawyer, Kirk Tousaw, in front […]

Ted Smith Survey #4- Enforcing Public Safety and Protection Strengthened laws and appropriate enforcement response: Establishing a successful legalization regime will require the strengthening of laws that will minimize or eliminate criminal involvement. It could also require the strengthening of laws to punish those who choose to operate outside of its parameters, including those who […]

By Ted Smith Here is the last video blog with a story of the good old days of Hempology 101 that we created to celebrate the 20th anniversary of the group’s existence in Victoria.  With so many great stories to tell it has been hard to pick the highlights, as I have attended or organized […]