Normalizing cannabis consumption is a goal shared by cannabis fans around the world. It’s a challenging goal, however, not liable to be met quickly. One reason is Cannabis’ aromatic nature. After seven decades of miserable, damning press, people have learned to hate its bouquet, associating ‘the smell’ with degeneracy. This attitude is unfortunate, as smell plays a special role in our lives. Of all the senses, it connects us most directly to memories. Apple fritters and strawberries recall childhood joy; garbage recalls trash. For too many people, cannabis stands with the latter. This conditioning creates a barrier for Licensed Producers and activists alike. But it is not a barrier we’ve seen addressed constructively by mainstream media, particularly conservative media. That is, until last month.

In October 2016, Postmedia News published a six-part investigation into what legalization might look like in Canada. They called the series, “O Cannabis.” It will be remembered that during the 2015 election campaign, Paul Godfrey, Postmedia’s CEO, ordered all of its major papers to endorse the Harper Conservatives. Those papers included The Vancouver Sun, The National Post, The Calgary Herald, The Ottawa Citizen, The Edmonton Journal, the Regina Leader-Post, The StarPhoenix (Saskatoon), The Montreal Gazette, and others. Who was more anti-cannabis than Harper? Yet a year later, we find its journalists describing the fragrant cane in overtly fragrant terms. Let’s look at some of the coverage.

To begin, the overall tone of the series is positive, even celebratory. The articles discuss the uneven pattern of arrests in Canada, and, quoting BC criminologist Neil Boyd, note the fact that organized crime is not a major factor, at least in BC. They offer positive portrayals of legal US state markets; and also of gray market activity in BC’s Kootenay region, largely supported by cannabis. They discuss branding, in particular, LP Tweed’s recent association with rapper, Snoop Dogg, and LP Tilray’s similar link with the family of late celebrity, Bob Marley. They discuss the importance of retails sales, considering both the motives of activists, and of climb-aboard capitalists. What they don’t do is quote residents who despise the cannabis smell, resent dispensaries because of the smell, and hate that their kids will have to learn about the smell. Here is a sample of what they do instead. 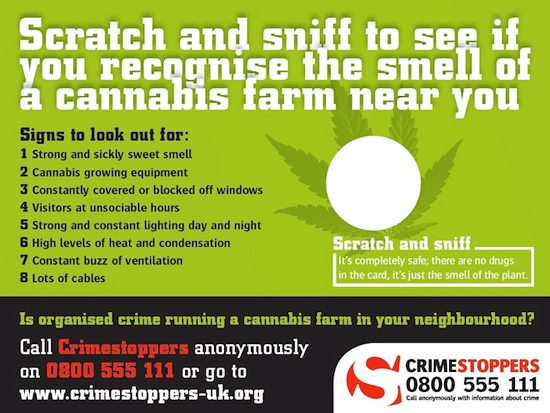 On dispensaries, journalist David Akin, describes the scene at Eden Medicinal Society, in Toronto. He writes: “The place is spotless.” He continues: “Along the neighbouring streets, the air is heavy with the unmistakable sweet smell of cannabis.” He suggests that the future cannabis retailer will be a cross between a pharmacist and a sommelier, offering expertise both in medicine and aesthetics to a new, elite clientele. (Has Harper read this stuff?) On the US scene, journalist Brian Hutchinson writes: “All over Denver, one notices the sweet, pungent fragrance of pot.” This sensation, he adds, is created not only by smoke, but also by “the scent of healthy grown plants.” That sounds much like, ‘scent of cannabis equals scent of health.’ Lori Culbert, on the subject of arrests, writes: Vancouver has a relatively low charge rate for marijuana possession, even though “the pungent aroma wafts through the city streets.” ‘Pungent aroma’ puts cannabis in a class with curry, garlic, and Colonel Sanders. Denise Ryan, on the issue of celebrity branding, emphasizes the need to toss out “sticky, outdated associations with marijuana,” including all slang terms. She offers this quotation from SmokeReports.com: “In the new world order, as Frappucino is to coffee, so cannabis will be to weed.” This quotation focuses on names, but it does so by associating cannabis with coffee, another pungent, sweet treat. Finally, Nick Eagland, writing on the BC industry, calls cannabis “an aromatic cash crop.” Upon visiting an MMAR licensed garden he tells us that: “the pungent, piney aroma of [the] crop” clung to his clothes, though “back in town,” no one seemed to notice.

Such reporting hardly represents balance, at least as we know it. Rather, it takes on the task of normalizing cannabis, praising it in words designed to re-set the public nose. This is a first for mainstream Canadian media. So why? For one, Postmedia is primarily in the newspaper business, and that business is struggling. Revenues are in sharp decline. Between 2008 and 2013, according to journalist Jan Wong, Canada’s media shed 10,000 journalist jobs. Newspapers now outsource copy-editing and layout at cheap rates. And if that’s not tough enough, China has robot reporter called Dreamwriter, ‘who’ can produce a “flawless 1000-page financial report in one minute.” (Alas, whither journalism?) Moreover, the Postmedia Corporation is publicly traded, and 40% US owned. Hence, I suppose, having grokked that Harper and company were not in tune with Canadians, Postmedia caught the sweet pungent smell of an aromatic cash crop, and opted to ride the wave. Or maybe the corporation just decided to give its journalists more freedom; its imposed endorsements of Harper in 2015 drew withering critiques. Or perhaps its board members, heavily stressed, took the leap and tried a few tokes. Whatever the case, expect more fragrant reporting from this peculiar giant, if not a merger with canna-business down the road, especially after we get the journalist robot.