Deprecated: The $control_id argument is deprecated since version 3.5.0! in /home/oq5ayjaeetjt/public_html/wp-content/plugins/elementor/modules/dev-tools/deprecation.php on line 304
 All You Need To Know About Decarboxylation - Cannabis Digest
Skip to content

Consider the scenario that is often seen in films: the person eats a full bag of raw cannabis to avoid being caught with the drug.  Eyes enlarge, mouths gasp, and people are adequately shocked. A person may shout that the individual ate the whole bag; however, the aftermath of the scene typically involves a variety of representations to what truly occurs when consuming raw cannabis.  Spoiler alert: the effects of consuming cannabis are not intense and actually lackluster. Why does this happen?

The answer to this question lies in the procedure known as decarboxylation – a process that is necessary for a person to fully enjoy the psychoactive effects of any cannabinoids that are consumed.

All the cannabinoids found within the trichomes of a raw cannabis plant presents with additional carboxyl groups or rings attached to their chain.  For instance, a tetrahydrocannabinol acid or THCA group has a synthetic prevalence within the heads of freshly harvested cannabis flowers.  In the majority of regulated markets, cannabis sent to dispensaries contains labels detailing the contents of the cannabinoid. In many cases, THCA is the highest cannabinoid available in items that are not decarboxylated, such as cannabis concentrates or flowers. 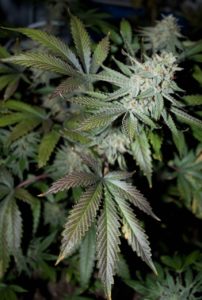 The two primary triggers of decarboxylation include time and heat.  Curing and drying cannabis over time can result in partial decarboxylation of the plant.  This is the reason why some cannabis flowers will present small levels of THC with the THCA levels.  Vaporizing and smoking can immediately decarboxylate cannabis based on the extreme high temperatures; thereby making the plant instantly available for absorption using inhalation.

The decarboxylated cannabinoids are available in vapor form making it easily absorbed by a person’s lungs; however, it is the cannabis edible required for consumption and to absorb the cannabis using digestion.  Heating cannabis plants using a low temperature over a period of time allows the decarboxylation of cannabinoids while still preserving the plant’s integrity and allowing one to infuse it into the items you consume.

What Temperature Is Required For Decarboxylation?

Time and heat can also contribute to cannabinoid degradation.  For instance, cannabinol or CBN is formed via oxidization and degradation of THC – a procedure occurring alongside decarboxylation.  The cannabinol accounts for more than the sedative effective with less direct psychoactive experiences.

How Can I Decarboxylate Cannabis At Home?

To perform the act of decarboxylation at home, you will require specific items including parchment paper, a baking tray, and an oven that can be set to approximately 220- or 235-degrees Fahrenheit.  The first step is to finely grind the cannabis until the plant can be thinly spread across the parchment paper and baking tray. Allow the cannabis to bake for approximately 30 or 45 minutes, or longer if necessary.

Decarboxylation of cannabis can also be conducted using a slow cooker and introducing solvents to the process, such as lecithin or cooking oils.  What are carboxylators? The technique creates infusions which can be utilized in different cooking recipes, cannabis capsules, and topicals.  As all of these contain decarboxylated cannabis, they will all be effective regardless of how you wish to consume the plant.

How Can I Make My Own Cannabis-Infused Coconut Oil Tablets?

The Hollow Chocolate Easter Bunny That Is Justin Trudeau By Russel Barth The media have been saying that the Justin Trudeau Liberals will legalize marijuana if they get into power. Trudeau has been saying things along those lines, I will admit, but he has promised nothing, and it is not yet an official party policy. […]

Shattering the Stereotypes A Look into the Medicinal Uses of Cannabis Concentrates It’s been called the “Tequila of Marijuana“(1)  the “Crack of Cannabis” and “Marijuana on Steroids.“(2) New concentrated forms of cannabis have become the latest demon for the languishing purveyors of prohibition, used to conjure dread and alarm.  They follow the path of the […]