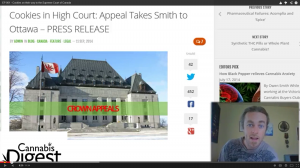 The Other Side of the Leaf

What are the other effects of full legalization that we may not be considering? By DF Douglas It is possible, just possible, that marijuana may be legalized in the near future in California as Prop 19 approaches in November. And as key components and industries come to consider the profits to be had in an […]

By Al Graham It was 2003 when I first heard of Alison Myrden. I know the year because it was just shortly after my first ever Crohn’s flare up, and the year I became involved in the cannabis community. As time went on, I wanted to get better educated about cannabis so started attending events […]