EDITORIAL: Big Brother Has Been Watching Us

The feds have been watching us and creating a massive database—our phone conversations, private email correspondences, our senseless text banter, web searches and ebay purchases, and of course our facebook accounts, among everything else. Should we be surprised? Absolutely not. I think most of us just assumed it was happening, though the bucket of cold assertion that was splashed across our faces likely put all of our stomachs in knots. Should we be angry and outraged? A resounding yes, but we should also be outraged at ourselves for allowing it to happen. Yet still, the indoctrination of fear runs so deep into North American society that we sit idly by watching our politicians arrogantly admit to breaking the fundamental laws that govern our society. All in the name of security. 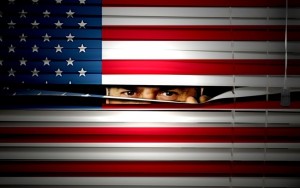 And the public eats it all up. Just after the news broke about the NSA leaks, a national television news agency took a viewer poll (take it with a grain of salt) that 54 percent of viewers thought the spying and data collection was reasonable if it was in the interest of our national security. On a CBC radio program I was listening to while driving, they had a guest who was a professor at an American university. He put it well (and I will paraphrase): How would those who find this behaviour from our government acceptable feel if they looked out their front window and saw a van parked in front of their houses taking pictures and a man in a suit searching through their garbage? They would be outraged and call the police. Their is a universal acceptance that it is not safe to put confidential documents or credit card information, etc., into the trash bin. This is not the case for online and telephone activity.

Do a web search for the key words that trigger the data collection. I likely use many of those words several times a day—everyday. I can guarantee that everyone reading this newspaper has triggered the data collection program. Nobody is immune.

The gradual erosion of our rights and freedoms, paired with the increasing fear perpetrated by media/government clouding our judgement, has allowed the population to become complacent. People are afraid to speak out for fear of losing the comforts afforded by the very social structure harming us. Our governments are breaking serious laws and instead of mainstream media covering that, they are following the actions of the whistleblower and the soap opera of who is going to offer asylum and the government’s efforts to get their hands on Mr. Snowden.

This is not acceptable. We are all in this together, and we have been given a gift to take action