Everyone was his brother or his sister. He would insist on knowing a police officer’s first name. That officer was “Brother” or “Sister” something. Brother Michael drew out their warmer human side. Almost everyone was charmed by Brother Michael, mayoral candidates who competed with him, the press who wrote about him, artists who sketched his caricatures, the police who arrested him, even his judges and his jailers. From the moment Brother Michael first met Reverend Walter Tucker, one year after Tucker founded the Church of the Universe (1969), they became inseparable friends.

The Church uses the simple metaphorical title, “The Tree of Life”, as a reference to cannabis. The Church of the Universe teaches that cannabis is a gift from God (Genesis 1:29). Church members revere cannabis/hemp: they smoke it, vaporize it, eat it, wear it and consider it to be a sacrament. The church does not define “God”. “God is God”. Members must figure that part out for themselves. “God” could be “a heavenly being”, “nature”, “ancestors”, “collective intelligence”, “aliens”, “evolutionary luck”, or whatever one had come to believe. This liberty and freethinking makes the Church of the Universe a tolerant and inclusive church. Even atheists and agnostics can accept it.

This writer knew Brother Michael and Brother Walter for four decades. It has been his privilege to provide expert evidence in their defense. This privilege extended not only to their cases in Hamilton courts, but also to the Superior Court of Ontario for two other Church of the Universe reverends.

Brother Michael was intelligent and frequently noted “You can’t kill an idea.” He was a licensed crane operator. He was self-taught in music as a gifted guitarist and self-taught in law, often representing himself. It didn’t hurt to get some legal tips from Brother Walter (whose family includes a crown prosecutor and a judge). Brother Michael’s last post on the Internet (May 20) was a short video of Brother Walter explaining that churches are supposedly exempt from civil laws such as the Federal law against marijuana. Both men advocated living healthy lifestyles: the golden rule, balanced diet, and use of herbs. They advocated regular exercise, self-acceptance, acceptance of others and recommended nudism.

Brother Walter was promised the right to live and retire on a private property in Puslinch that Walter had named, “Clearwater Abbey”. He built a house there (1969). The promise for his secure retirement was broken (1986) along with all the hearts of those who remember many special occasions there. 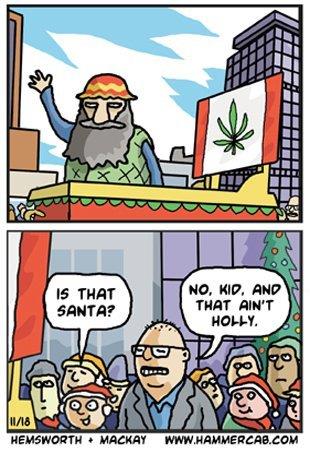 The Church was bequeathed (1998) an old steel plant in Guelph which they renamed, “Hempire Village”. Sadly, exposure to extraordinary levels of toxins on the site may have shortened Brother Michael’s life. Their last public speaking appearance (other than court) was in 2008 at Hamilton’s city approved Hempfest.

To many kids, this gentle giant smiling man with an enormous white beard was Santa Claus on a day off. Brother Michael was best known for his devotion to cannabis and the many court cases that came from it. “We don’t ask permission – God already gave it.” Brother Michael longed for a day in court to assert the constitutional religious right to grow cannabis. His only regret was that people could not grow their own.