Deprecated: The $control_id argument is deprecated since version 3.5.0! in /home/oq5ayjaeetjt/public_html/wp-content/plugins/elementor/modules/dev-tools/deprecation.php on line 304
 Ganja in Jamaica - Cannabis Digest
Skip to content

Setting the present history of Cannabis Sativa in Jamaica aright: A Rastafari Perspective

By Robert Gordon (Ras Kahleb)
It is scholarly opinion that it was the indentured laborers from eastern Asia, the East Indians in particular, who arrived on the island of Jamaica with seeds of Cannabis Sativa, and who had introduced the Cannabis culture to the Jamaican population after emancipation in 1838. No longer coerced into servile labor on the plantation by the Jamaican plantocracy, the Africans had now begun to demand lands for living and agricultural purposes and payment for their labor, which was still needed. Emancipation clearly had its immediate negative effects on the Jamaican plantation economy, and the freedom of the former African enslaved had now correlated with its decline. Hence, the British Crown paid out compensation to the Jamaican planters, and with this they made a major historic move.

Whilst the Africans were now proactive about earning a wage and contemplating the better treatment they would receive while on the job, the plantocracy was considering something else. Not wanting to pay the Africans the wages they were demanding, nor wanting to establish a humane relationship with the former enslaved, the plantocracy in Jamaica sought to employ laborers from the other side of the globe. In Asia, for example, push factors forced East-Asians out of Asia in search of opportunity, and pull factors attracted some to the Caribbean, where these opportunities were. The push factors were supposedly persistent war, slavery, poverty, and famine, and the pull factors were supposedly a peaceful, free, and employed life in the West on the fat of lands which could eventually be purchased.

Although it is a noted fact that the Chinese had a thriving Cannabis culture for thousands of years, it is only said that they brought with them seeds of the Opium plant to Jamaica, which was rather unusual to the African 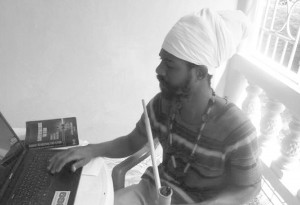 population. On the other hand, the East-Indians carried along with them seeds of the Cannabis Sativa plant. Though a psychoactive plant used in East-Indian culture for millennia for the purpose of communing with gods, Cannabis was also used for its vast nutritional and healing value. This very same Cannabis culture persists in Jamaica today, and is best reflected by the Rastafari eccentric, the “Bird Imple” or “Bird Man,” who often eats the raw cured buds and seeds of Ital grown Cannabis Sativa for nutrition and peculiarly uses the raw leaves to quickly heal cuts, burns, or any abrasion of the skin. Another noticeable cultural habit among the Rastafari and the wider Jamaican community is their Cannabis tea and its healing effects. A bit of bud from the Cannabis Sativa plant is boiled in pure spring water with no sugar added, and given to the smallest of children with asthma or bronchitis to drink as a medicinal tea. Also, as a cultural practice throughout Jamaica, the Cannabis Sativa plant, preferably the buds, are soaked in pure Jamaican overproof rum made from cane sugar, and at a prescribed time, is massaged onto the necks, chests and backs of children and adults with asthma, bronchitis, or any infection of the lungs.

A more recent debate has been aimed at challenging the idea of Jamaicans inheriting their Cannabis culture from their East-Indian brethren. A sociology graduate student and friend of mine, who attends the University of the West Indies, brought it to my attention that there were arising opinions in relation to a Cannabis culture being practiced clandestinely by Africans during and after slavery in Jamaica, which have raised the alarm of some academicians. Whether I am in support of this notion or not, it is important to note that most if not all African spiritual or metaphysical practices were outlawed or forbidden on the various plantations throughout the Caribbean, and to survive, this Cannabis culture would have been practiced rather clandestinely. Furthermore, in my opinion, the idea that Africans carried Cannabis seeds from Africa during and after trans-Atlantic slavery to the Caribbean does not entirely refute the notion or popular opinion that Jamaica inherited its Cannabis culture from its East-Indian community. However, such an idea does undermine that fragment of popular intellectual opinion that has, for a long while now, been testifying to a possible ill-fact that it was the East-Indians who had introduced Cannabis to the island, and that they were solely the pioneers of the Cannabis culture in Jamaica.
It is a historical fact that all throughout Africa, especially the sub-Sahara, people cultivated Cannabis Sativa for its spiritual/metaphysical, cosmic/astronomic, nutritional/medicinal purposes and uses. On this same topic, Ted Smith’s recent work, Hempology 101: 4th Edition, says: “Though Cannabis Sativa is not indigenous to Africa, it arrived there tens of thousands of years ago, and thrived in the sub-Saharan regions of the continent where conditions are perfect for growing cannabis. The Ethiopians are particularly well known for their use of cannabis” (Smith 2012). Additionally, in his national best seller The Emperor Wears No Clothes, Jack Herer helps to confirm the fact that both primitive and modern man in Africa cultivated Cannabis: “Carl Sagan proposed evidence using the Bushmen of Africa (today) to show hemp to have been the first plant cultivated by man dating to when he was a hunter-gatherer,” (Herer 2000). In a recent conversation with Dr. Jalani Niaah, a Rastafari scholar and understudy of the Late “Professor Emeritus” Barry Chevannes, Jalani confirms the notion held by some that Africans, while on the plantations in Jamaica, did have an existing Cannabis culture prior to emancipation, but there was little evidence to prove this if you are to make reference to any particular documented source. Based on the above arguments made by Dr. Niaah, I think it would be correct to rather hypothesize that East-Indians assisted the growth and development of the already existing Cannabis culture in post-emancipation Jamaica.

I think that it is now pertinent that more research be conducted on this subject, and for the purpose of setting the present history of Cannabis Sativa in Jamaica aright. It is factual that not enough scientific research has been conducted to be able to precisely establish whether or not Africans took Cannabis seeds with them to the Caribbean during and after slavery. Likewise, it is also a fact that not enough research has been done overall to establish any scientific or intellectual opinion either, yet one presently and predominantly exists. My argument here is that there is also room for a theory that Africans had carried along seeds of the Cannabis plant to the Caribbean during and after trans-Atlantic slavery. Such opinion, once widely held, can also become considered as an established fact.

In July of 2000, the National Ganja Commission was formulated by the People’s National Party (PNP) Government with the late “Professor Emeritus” Barry Chevannes as its Chairman, and had set out to conduct its scientific research on ganja and its potential impact on Jamaican society. The commission was then to report its findings and make recommendations to the Jamaican Government. In 2001, in the report made by the Commission, Chevannes highlighted the harmlessness of ganja use throughout Jamaican society. Furthermore, on top of the list of recommendations to the Jamaican Government was the “decriminalization” of small amounts of ganja and its “declassification” into a “soft” drug, (National Ganja Commission Report 2001). Previously, ganja was wickedly classified as a “hard” drug and associated with cocaine and heroin. Historically, those found with ganja in their possession were simply marred, beaten and jailed for long periods of time or treated as madmen and thrown into asylums. In the late 1960s, reggae icon and marijuana activist Peter Tosh had a near-death experience when he was brutally beaten by the Jamaican police for a spliff tail, and as he told his close Rastafari brethrens, “I had to play dead for them to stop beating I’ man.”

In terms of legislation, ganja is illegal and still has not yet been decriminalized as recommended by the Commission over a decade ago. Recently, statistics have highlighted how at least fifty percent of the population has consumed the ganja plant in one form or another. Even my own mother, a devout Christian, confesses to me that she once had a drink of ganja wine back in the 1970s, and that it was given to her by the brewer himself, who was a Rastaman living in the Constant Springs community of St. Andrew, Jamaica, and who was a member of the Rastafari Coptic Community in the hills of St. Thomas, where my dad spent the most of his time as a sergeant of Jamaican Constabulary Force. On a cultural note, the Jamaican society, with the Rastafari as their leading spirits, are pro-ganja. Even those corrupt politicians who visibly fight against ganja through legislation, are the major underground players involved in its trade to other territories throughout North, South and Central America, and the Caribbean.

(Part 2 of 3) This paper is an expanded version of one presented on behalf of Law Enforcement Against Prohibition (LEAP) on Feb 4 2015 at the University of Victoria. (Read Part 1: Racism) Illegitimate Laws Our laws are founded on principles which must be honoured by Parliament, otherwise they will be seen as illegitimate […]