Deprecated: The $control_id argument is deprecated since version 3.5.0! in /home/oq5ayjaeetjt/public_html/wp-content/plugins/elementor/modules/dev-tools/deprecation.php on line 304
 moses-and-the-burning-bush.jpg - Cannabis Digest
Skip to content 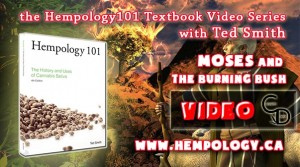 In every five years of their professional lives, family physicians and specialists in Canada must complete 250 credit hours of Continuing Medical Education (CME.)  To fulfill this requirement they trudge off regularly to lectures, study sessions, and educational conferences.  In 2013 it became more likely that they could gain such credits in Canada by attending […]

In 1974, late activist Thomas Forçade invented and began publishing the pro-marijuana magazine, High Times.  This year the magazine turns forty.  In honour of its birthday Forçade’s Trans High Corporation has published the retrospective:  High Times:  A 40-Year History of the World’s Most Infamous Magazine—self-styled both a “visual history” and a “coffee table book.”  […]