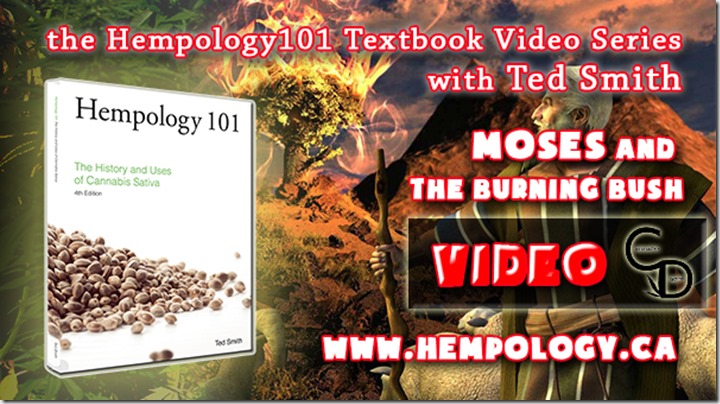 No one in the Old Testament commands as much respect as Moses.  He is a founding father of the Church, respected by the Jews and Christians for saving the Hebrews from Egypt and for bringing us the 10 Commandments.  Indeed some might argue there would be no Jews or Christians without him.

What gave Moses such clear vision?  Why is he able to communicate with God when so many others appear lost?  Did Moses use cannabis?

For those who have studied this matter with an open mind there is no doubt that Moses used cannabis in several forms that were considered sacred, in sharp contrast to the Jews and Christians of today.  The incense of the time was loaded with hash, and several references in the the Book of Exodus refer to Moses entering tents to talk to God in which the incense smoke was very thick and claimed the voice of God came through the smoke.  The reference to the burning bush that was not consumed by fire is most certainly a reference to a cannabis plant from which Moses could make hash to chat with God without having to actually cut the plant down.

The most clear reference to cannabis in Exodus is when Moses is instructed to make an anointing oil consisting of 7 pounds of cannabis cooked in olive oil with a few other things to help it be more effective and smell great.  In older versions of the Old Testament cannabis is called kaneh bosom or q’aneh bosm but in the King James version it was switched to sweet calamus, a plant that was not likely used.  Signally the beginning of documented cannabis prohibitions, Moses told the priests that this anointing oil was only to be used by them, not the general public, and only during religious ceremonies.

If you want to learn more about how Moses used cannabis please check out this short video we made covering the subject.  For more cannabis history you can subscribe to our youtube channel or better yet buy my book, HEMPOLOGY 101: THE HISTORY AND USES OF CANNABIS SATIVA.

Previous article Do you have the ‘Time 4 Hemp’ ?

Judith Stamps·November 16, 2015
There are no comments yet No comments