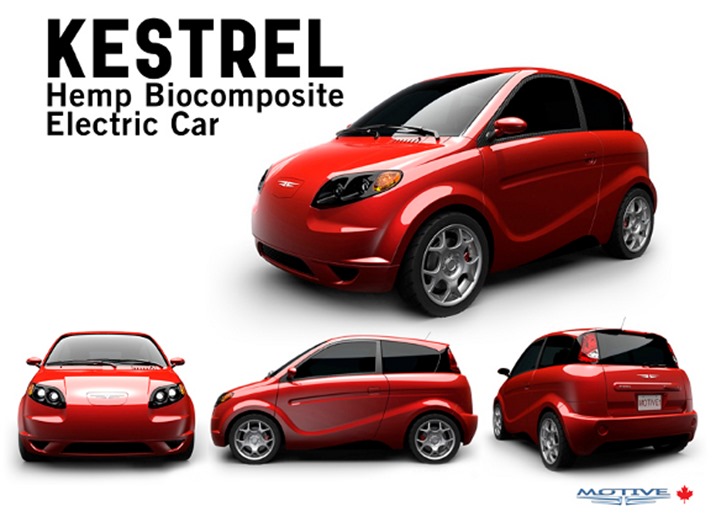 UPDATE: This article was posted from our archives without any alterations . Some commenters have stated this information is now out of date. We apologize for the mixup.

Environmentalists speak often, and prophetically, about the need for more industry impetus for cars with low or—even better yet—zero emissions. What’s not centre-stage, and should be, is the fact that hemp fibre can be used effectively as a construction material for a vehicle’s shell. Move over Hybrid.

The Kestrel is now the trend setter. (See picture)

Not only is this vehicle fully electric, answering the zero emission vehicle (ZEV) demand, it sports the all—green-to-manufacture—hemp based body panels to boot!

Groundbreaking? Indeed it is. Motive Industries Inc., out of Calgary Alberta, is changing the face of car manufacturing by simultaneously employing Hemp and electric for the vision for the industry’s future in Canada.

The Kestrel was showcased for the first time in Vancouver at last September’s (2010) Electric Vehicle (EV) Conference and Trade show. We’ve caught up with Nathan Armstrong, President of Motive Industries, who says this: “It went very well.  Huge response and the internet visits went viral. We did get some flack internally for aligning with hemp, but they got over it.”

That’s music to our ears. Clearly seeing enthusiasm all around him—needless to say, especially among fibre hemp promoters. Armstrong wants to educate people about what we can hope to see developing into a mainstay trend.

“We’re hoping it will demonstrate Canada’s abilities in technology and vehicle development. Something that hasn’t been highlighted internationally—ever.  If successful it will generate a whole bunch of jobs and general industry activity,” says Armstrong. 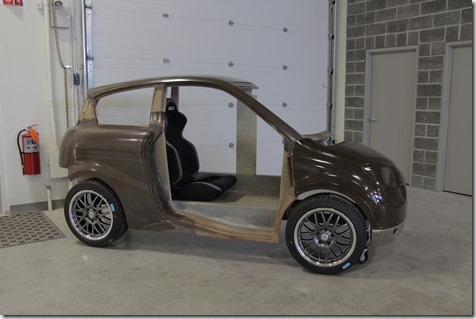 But even in these early days there’s no question the Kestrel answers a number of needs. It is a major shift in thinking that will add more green jobs, creative innovation, and most importantly the key use of our Canadian advantage—the fact that by the year 1998 the Feds declared the legal use of mature hemp stalks for manufacturing, construction, textiles and products, etc. Interestingly, the U.S. is more backward, in not allowing the use of industrial hemp. This lack of vision is good for Canada. The Kestrel demonstrates a new message coming from the auto industry in Canada both economically and environmentally.

“This project was largely started by a group in Ottawa that was calling for the start of a Canadian OEM [original equipment manufacturer],” explains Armstrong. “They were looking to go the traditional route and were looking to raise $500MM to start the project. I came along and said ‘if Canada is going to do this, why not do something advanced to demonstrate our abilities?’ They all agreed hence the direction this program took.”

The Kestrel is part of Project Eve, created by MII and Toronto Electric, with the purpose of enhancing electric vehicle production across the country. With the first 20 Kestrels being built by polytechnic schools in three provinces it’s clear the Kestrel is switching it up—moving the auto-industry in a new bold and creative direction.

“We decided to use the schools for two reasons. They’ve been getting amazing investments from Government to expand on applied research facilities, which are essentially the best workshops we could ever hope to find. We’re better off using them than anything else. The second reason is student outreach and education. This is a very important part for us and we hope to inspire many students to go build their own stuff,” says Armstrong.

But let’s get right into the facts about hemp as a structural material. It’s thought to have more than twice the strength of other plant fibres. But in addition to not requiring much water, little pesticide, and the crop being high-yielding, is it not part of the green economy by offering ideal sustainability at its best? Armstrong gives a resounding “Yes!” 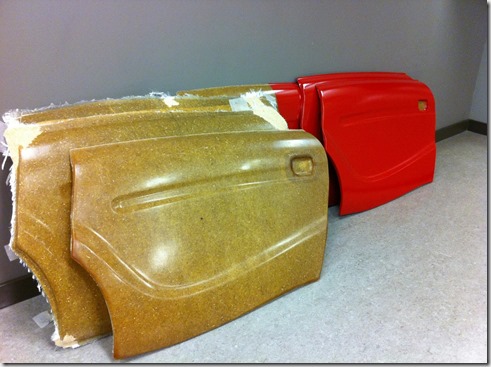 Hemp is a fibre that has many advantages over other materials. There are numerous merits to processing and then employing a hemp bio-composite.

“Compared to fiberglass, for the same performance, it’s 10 percent lighter and 20 percent less expensive (in the current market) which will swing further in the coming year. It’s also nice and healthy to work with.”

“It comes in mat form (kind of like) stiff cardboard. This is processed by the Alberta Research Council using essentially a paper-making process. It is all very green and low energy.”

It requires less heat and fewer chemicals to produce the fibres, and uses the natural energy of the sun for what it does need, as opposed to, say, a furnace. Instead, with natural hydro the process is clearly more environmentally friendly—a key point Armstrong and Motive Industries is making with the introduction of the Kestrel.

Armstrong adds that “The true cost of synthetic fibres isn’t known, as the whole industry is subsidized and based on huge economies of scale. To make fibreglass a massive furnace is needed and to make carbon fibre all sorts of nasty chemicals and acids are used—plus big furnaces. Natural fibres = seed+water+sunlight.”

In the past, our auto industry’s steel dependence existed largely because it was thought to be the strongest material to use in vehicle production. Hemp bio-composite’s specific merits may well alter this traditional thinking. It has the impact resistance of fiberglass, but its bio-composite is cheaper to produce and presents fewer health risks for workers. Armstrong confirms this.

“It’s not stronger than steel—not even close. It is tougher though, and will not dent. We use the material selectively to provide strength where we need it and aluminum for the main chassis structure. Steel has the stranglehold because of volume. Parts are quick to make. Composite parts are a bit more of an artform and production is slow (at least by Detroit standards).”

For electric-car manufacture, steel’s not exactly light-weight.  To make ultra-efficient vehicles (obviously a desired feature) hemp bio-composite fits the need.  Plastics are based on oil, and we know the challenges faced there. Composite materials, such as carbon fibre, present challenges both cost-wise and in terms of manufacturing and repair. Hemp solves these problems.

“First, you don’t want to get too light with a car. 2000 lbs is a good spot which works well for bio-composites. Through our research into very advanced materials (nano/crystalline/ceramics) we hope to increase the strength of natural fibres to the point at which they are truly competitive. Their advantage then will be low cost of entry and the ability to make advanced forms.”

It’s interesting to know from (e.g. a business start-up standpoint) that  Alberta Innovates Technology Futures (AITF), under license from the Canadian government, is behind this move in a more forward-thinking direction. “The government supports many programs that get a technology to a prototype phase. Any industry group can access these technologies given maturity and cash.”

Most people don’t know this, but the hemp that is turned into a composite material is grown “all over Alberta, B.C., and Manitoba” Armstrong explains. Motive Industries, however, chooses to source from Vegreville, Alberta (near Edmonton).

According to Armstrong, the reason that hemp for auto manufacture hasn’t taken off in a bigger way, considering it has been legal since 1996, is “lack of industry interest and vision.”

The reason this innovation hasn’t formed the baseline for next year’s electric car body shells is because, as Armstrong puts it, the “supply chain isn’t really in place— yet.”

That’s where we, the consumers, come in. It’s up to the people to make the demand for the supply chain. It’s obvious that the Kestrel will be influencing the future of electric-car building, but are there still stumbling blocks and wrongly-placed stigmas operating (a resistance to hemp use) preventing more companies from following suit? That stigma must be busted wide-open—through education.

Motive Industries Inc. is still working with the original scientists from the project in the testing procedures, so there is a good degree of follow-through and safety consistency. The timeline for delivery of the 20 Kestrels is fast-approaching—said to be Q2-3 next year. When asked which Calgary-based energy distribution company is to be the lucky inventory holder, Armstrong answered “I can’t say directly, but they’re the only deregulated utility…”

The car will be available “in Canada initially, then other countries. We’re working on distribution models with a few groups.”

The burning question for many is: Is it possible to be added to a wait-list? “Not yet,” says Armstrong. “We hope to put out a survey to generate public interest next year. You can fill out and help promote our existing survey though.” You got it.

For more information about the history of the industrial hemp campaign in Canada, start with the creative online booklet published by the CAW (Canadian Auto Workers) in collaboration with the former leader of the Ontario Green Party at <www.caw.ca/assets/pdf/hemp.pdf>  For Ontario sources, try <www.ontariohempalliance.org/home/index.html>

Darren McKeage is the designer behind the car and you can read his vision for the car on the MII blog <http://autodesign-blog.com/?p=5> It carries four passengers including driver, can speed up to 90 km/hr, and boasts a range is 40 to 160 kilometres before recharge is required. Depending on the type of battery, the better the battery the further the range. Battery technology hence is key to EV technology.

Next article Is the Cannabis Law “An Ass”?

Ted Smith·October 28, 2012
There are no comments yet No comments

EDITORIAL: Protect Your Family From Prohibition