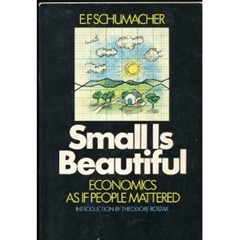 If you’re into alternative economics, you may have come across E.F. Schumacher’s text: Small is Beautiful: Economics as if People Mattered, first published in 1973 as an accessible paperback for a liberal era.  It was republished in 1989 in the rocky years that saw the nuclear explosion at Chernobyl; glasnost and perestroika; the fall of the Berlin Wall; the height of Thatcherism in the UK, the election of Canadian Conservative Prime Minister Brian Mulroney, under whose guidance Canadians were forbidden to sell or own literature on cannabis; the enigma of  ‘just say no;’ the militarization of US police; the systematic harassment and imprisonment of black Americans; the birth of rap music; the appearance on the streets of crack cocaine; and in drugstores, of Prozac.  The book was an iconic challenge to the growth of mega-business, and is said to have been one of the most influential texts of the late 20th century.  I wish it had been.  In a world now ruled by ‘the 1%,’ its message remains largely unheard, but is more urgently needed than ever.  For a generation experiencing the emergence of a legal cannabis industry in Canada and elsewhere, its advice should be considered.

Schumacher’s central idea is that measuring the well being of a nation by looking mainly at its gross domestic product (GDP, and assuming that everyone benefits from mass production, is a misguided 19th century notion.  As we should have all seen by now, this notion has fostered gigantic corporations that produce wealth for the few, and poverty for the many.  Besides the unfortunate distribution of wealth, it has also encouraged unhealthy workplaces, disconnected communities, and estranged individuals.  For building connectedness, one needs smaller, local producers for local markets.   Here are some of Schumacher’s reasons why.

1. No one really likes to work in a place where they answer to a boss who, in turn, answers to another, who answers to a series of others, ending in a pinnacle somewhere in the Land of Oz.  “I don’t make the rules around here” is an alienating concept.  Just ask the Health Canada Licensed Producers of cannabis, or the MMAR licensed producers.  Ask Law Enforcement Against Prohibition.  Such working conditions are soul-destroying.  They are an insult to human nature, breeding feelings of emptiness, and meaninglessness.

2. No one enjoys the idea of working in a business that is busy damaging the natural environment, gorging on non-renewable resources, and dumping toxic sludge on human communities where and when it’s convenient.  These practices create illness, and give enterprise a bad name.  They destroy our peace, and our sense of wellbeing.

3. No one likes to be a cog in a machine.  Fractured mass production techniques that go hand in hand with monotonous, moronic jobs, leave us depleted and depressed.  We need whole work.

4. No one can be proud to work in businesses that use their power to manipulate desires, create fake needs, prey on our insecurities, and push endless consumption.

5. No one can feel part of a workplace that celebrates greed.  Greed divides us.  It’s not for nothing that chronic illness, fatigue, and depression have become rampant. Last October the World Health Organization declared depression the leading cause of disability worldwide.

And let’s add this thought.  In much of the industrialized world people are permitted to bury their misery in shopping sprees, gambling, eating, drinking, smoking, guzzling coffee, or chugging prescription pills.   If those things don’t work for them, and they try something else, they face arrest and prosecution.  Being arrested in this way destroys people’s connection to society too.

Now we are on the cusp of creating new work, new production methods, and new enterprises in a legal cannabis industry.  Some part of that industry has already joined the society of giants.  The recently amalgamated LP, Tweed Marijuana Inc. and its CEO, Bruce Linton, have signed on for the next few seasons to be in the old game.  They plan, so they say, to dominate the entire playing field.  If they can attract enough investors, they may have some success.  But here’s the more interesting part of our future.  The Canadian public has yet to imagine, much less meet, the people who, for the past two decades, have been the heart of the cannabis industry.  Through the news, people have heard about gangs, black markets, and so on.  But the real industry is a thing they’ve never seen.  They haven’t met the many experienced, unlicensed growers that serve both dispensaries and the cannabis friendly public.  Most have yet to visit a dispensary, even to see what they look like, and what sort of people go there.  Hardly anyone has met, or even thought about, the many producers of extracts, salves, and edibles.  Who are they anyway?  The 60% who have had nothing to do with cannabis have yet to meet most of the 40% who have tried it.  So when these folks, cannabis producers and consumers alike, emerge en masse from the shadows, their collective presence will look much like a new continent, or a parallel universe made visible for the first time.  That day will come slowly for many Canadians, but it will come.  Consider former Canadian Health Minister, and interim Conservative leader, Rona Ambrose.  Just the other day she unveiled her recognition that the Canadians who want legal cannabis are mostly adults.  It’s an important point.

The cannabis industry (serving mostly adults) already provides wholesome work for many people.  Growers and bakers are able to spend their time producing something they can believe in.  They can feel proud of making an herb to take the place of deadly prescription drugs, and heavy alcohol use.  They can be part of a team small enough so that its members can get to know one another.  In this setting they can have a say in how things get done.  They can have variety in their tasks.  They can make a whole product: a plant, a medicine, or a well turned out dried flower.  As well, some can find work in non-profit centres, if they prefer that style, and some in collectives.   Not all, but many will have come to value these work qualities as much as they value profit.  The possibilities for variety in organizing this important work are infinite.

Of course, the cannabis industry did not invent contemporary small handicraft enterprise.  And attempts to create such enterprises have not always led where one might have wished.  The Body Shop, founded in 1976 in Brighton, in the southern UK, and Ben and Jerry’s ice cream founded in 1978, in Burlington, Vermont, were efforts at small artisanal production.  At least they were once such efforts.  They have since been snarfled up by big business.  So now they are pseudo artisans.  In fact, ‘artisanal’ has become such a buzzword on food labels that it is starting to be my—and others’, I’m sure—least favourite expression.  The ‘small is beautiful’ cannabis industry, presuming there will be one, will have a fine time keeping ahead of mimics.

On the other hand, we see emerging, popular farmers’ markets.  Thus far they appear to be remaining what they look like, and are bright spots in an otherwise dark industry.  By supporting them, we are able to support a better vision of production.  As the Trudeau government has stated that profits are not its main priority, and some local city councils have taken it upon themselves to recognize the value in medical dispensaries, there is some reason to hope that the new plan will be inclusive, and will allow a mix of production styles.  These must include, of course, home growing for personal use.  That production is vital.

The two most important thoughts I’m left with after reading Schumacher are that ideals are important, and that work needs to be more than putting in time in return for money.  Ideals are not romantic illusions, even if we can never entirely achieve them.  They are important standards by which we judge how well we are doing.  As to work, we need it to feed our creativity, and our feeling of wellbeing.  We need it to connect us to others, and to give us a sense of belonging.  We need our work to do these things just as much as we need it to produce things.  That’s an important ideal, one that I hope as much of the cannabis industry as possible will adopt.  If we’re going to emerge as a new continent, let it be as human a continent as we can make it.  And if we’re going to appear as a parallel universe, let’s make it one divided into smallish, human scale units that keep us connected to health, to imagination, and to nature.  Should even a portion of the Canadian cannabis industry manage something like this ideal, it will have done something worthy, even beyond cannabis.

Owen Smith By popular demand of the Cannabis Digest readership, the Spring Issue #48 will feature a wordsearch puzzle. Find the various devices, tools and accessories that assist in the use of cannabis and its derivative products. If you don’t have a Cannabis Digest newspaper you can Print the Puzzle, but be sure to ask your local […]