Deprecated: The $control_id argument is deprecated since version 3.5.0! in /home/oq5ayjaeetjt/public_html/wp-content/plugins/elementor/modules/dev-tools/deprecation.php on line 304
 The Early Exportation of Medical Ganja in Jamaica - Cannabis Digest
Skip to content

The Historical Rastafari Settlement at Pinnacle

This year commemorates the 60thanniversary of the strategic destruction of the historical Rastafari settlement at Pinnacle by the colonial state of Jamaica. In legal possession of nearly 500 acres of land accredited to him in 1939, the Honorable Leonard Percival Howell, the most influential leader of the early Rastafari Community, founded Jamaica’s first self-sufficient agro-industrial community in the dry and stony hills of St. Catherine. At Pinnacle, there were several thousands of Rastas who came together from all over the island in an economic activity never before known outside of forced enslavement in Jamaica. The early Rastas produced a wide variety of agricultural commodities, which they sold in traditional Jamaican markets, such as those of the Coronation and Spanish Town markets.

Among these agricultural commodities produced at Pinnacle, the Ganja plant was Queen. In assisting her to produce well, a variety of beans and peas, including Pinnacle’s famous sweet African Gungo Peas, were cultivated in large amounts, thus adding nitrogen to the soil and camouflaging the Ganja (a practice still used by Jamaican cultivators of Ganja today). Rich guano—bat manure—was used to add nutrients such as phosphate, nitrate, potassium, and some micro-nutrients to a barren land that would soon produce tons of Ganja for export.

The Rastafari Community at Pinnacle, with help from members of the Jamaican business community as investors, smuggled Ganja to Winston Churchill’s England during the Second World War. According to the oral history held among Rastas, the consumption of Ganja made the British forces feel more confident and even invincible while attacking Nazi forces. It was during this early to mid 1940s period that the most Ganja at Pinnacle was exported. As a result of this new economic venture among the Rastas, the Pinnacle Community grew wealthy on British pounds. Hunger and disease were now only affecting the poorer and non-Rastafari communities throughout Jamaica. Between 1939 and 1941, there were incidents of deaths at Pinnacle due to starvation and illnesses that would never again plague the community after it became one of the few producers, marketers, and exporters of Ganja in the West for economic and health reasons.

I think that the indigenous culture of Rastafari in Jamaica should be accredited as having pioneered the global grassroot/scientific consciousness towards the legalization of Ganja for medicinal, spiritual, and recreational uses. Having been the most persecuted group for Ganja activism, the Rastafari community is now seeking reparations from both the British colonial and post-colonial governments of Jamaica for its present socio-economic and politico-cultural underdevelopment as a result of the planned destruction of their agro-industrial community at Pinnacle, St. Catherine. During its peak period (1941-1954), the Pinnacle community had produced hundreds of tons of Ganja for the local and export markets, thus making the Rastafari community in Jamaica pioneers in the exportation of Ganja.

According to Louis Moyston, a Howell scholar, in an article published by the Jamaica Observer on the 4thof Feb., “Pinnacle was a place and a concept for industry and self-reliance. By and large, the early Rastafarians were characterised by self-help and industry; a vast majority were self-employed in a range of areas […] The second eviction from Pinnacle occurred in 1954 in a major raid by the police. Pinnacle was destroyed and many persons including children were arrested. According to newspaper report, over eight tons of ganja was confiscated and 140 Rastas taken into custody” (Jamaica Observer, 2014).

It was on the 27thof May 1954, four days after Pinnacle was dismantled, The Star newspaper reported that “Some $3,000 lbs in cash was found by the police raiding party which last week-swooped down on the Ras Tafarians’ Settlement at Pinnacle, near Spanish Town” (The Star, 1954). According to Attorney-at-Law Ras Miguel Lorne, “one colonial police newspaper, Mirror Mirror,in 1954 reported that during the final raid of Pinnacle a Rasta man was found with $800 lbs and his spouse with $600 lbs, all of which were confiscated by the police” (Presentation on Pinnacle made by Ras Miguel Lorne in Jamaica on the 29thof Dec. at the RYIC’s final General Meeting for year 2013, held at the Bob Marley Museum).
In her position paper, titled Pinnacle—History and Current Status, pertaining to the historically brutal raid at Pinnacle, Barbara Blake Hannah says, “came to a boiling point in 1954 with one of the first joint police/military operations in Jamaica. Under orders from 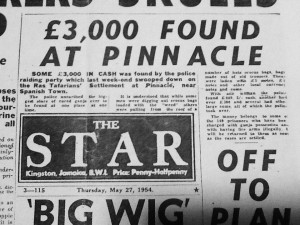 Prime Minister Bustamante on special advisement from the Monarch, a battalion of soldiers, police and select members of the Jamaica Secret Service executed a preemptive raid on the Pinnacle and destroyed the village, farmers, homes, and schools that had been constructed, leaving thousands homeless” (Hannah 2008). The strategic destruction of Pinnacle was a fierce attack on the economic viability of the Rastafari Community, and since then the community have not yet recovered from this historical persecution by the British colonial state of Jamaica. Those Rastas who suffered persecution fled Pinnacle for the Back O’ Wall, Dungle, Wareika Hill, and the Coral Gardens communities, where they again became victims of a similar violence. It is then evident that the Rastafari Community has strong claims for reparatory and restorative justice, and the full restoration of the lands at Pinnacle from the St. Jago Hills Developers Company Limited should be the outcome of any court ruling. Furthermore, for its lands to be fully restored its industries that once made the early Rastas thrive at Pinnacle such as the food, broom, clothing, Ganja and creative industries must also be restored. Critically, with a consistent increase in unemployment, poverty and violent crime, Jamaica is in need of agro-industrial and self- sufficient communities like the one previously established by Mr. Howell and his Ethiopian Salvation Society at Pinnacle during the early 1940s.

Since the launch of the Ganja Future Growers and Producers Association (GFGPA), the Rastafari Community feels that despite its pioneering role, it is now being left out from having an impact on the proposed direction of a regulated medical Ganja industry in Jamaica. In terms of a compulsory condition of membership, the GFGPA’s General Working Principles state that “all members will have to sign a declaration contained in their membership form that they will not take any part, directly or indirectly, in the growing/cultivation of ganja until there is a legal and regulated framework for the growing of ganja.” This is a natural conflict with Rastafari interests.

Furthermore, pertaining to the “Proposals for the Protection of the Traditional Cultivator and the future Small Farmer” formulated by the GFGPA, it is declared that a “‘Home Growers’ license for medicinal or religious purposes be given at nominal prices for registered property owners to seek licenses for up to a maximum of ten plants to be grown within the precincts of their homes in a fenced area,” andthat the Government of Jamaica, through a designated agency, be the sole exporter of vegetative cannabis. That document also proposes that the state significantly increase the penalties for all illegal exportation and persons found with compressed ganja. The vast majority of Jamaicans are landless and do not own property, so they would not be qualified to grow ganja for medical and spiritual purposes. Furthermore, I do not think those Jamaicans who own property should be restricted to only ten plants. State agencies should not have the exclusive monopoly on inspecting and packaging cannabis export. The same Jamaican state that has generally played a minimal role in the economy now wants to regulate and make money off of the Ganja industry. The state should instead decrease the penalties for all illegal exportation, and for persons found with compressed Ganja. The government should also influence illegal cultivators and traders of Ganja into going legal, rather than criminalizing them.

Also important to note is that the Ganja Future Growers and Producers Association is against decriminalization of Ganja in Jamaica. They have not taken into consideration the socio-cultural expression of the people as it relates to Ganja consumption, although recent statistics have revealed that fifty percent of Jamaicans consume Ganja in one form or the other. Clearly, the many capitalists who will venture into a newly regulated medical Ganja industry are not concerned with social rights, but only with their own profits and domination of a soon-to-be legalized export market for Ganja in Jamaica.