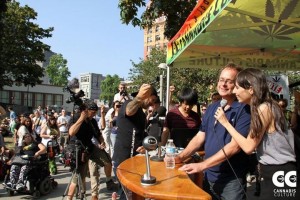 Ted Smith With the legalization of cannabis just around the corner in Canada, there is a great deal to discuss.  Giving stakeholders an opportunity to debate various points regarding the use, production and distribution of cannabis should contribute to the public discourse.  Taking advantage of this opportunity, the International Hempology 101 Society will begin hosting […]

Owen Smith In an attempt to make it easy for anyone to create their own International Medical Marijuana Day picnic, we are offering up these graphics and posters to all. IMMD is on a new date this year, June 11th. This celebrates the unanimous Supreme Court of Canada decision in favour of patients rights to […]

Ted Smith Many cannabis enthusiasts were tickled green when the Liberals won the federal election last fall after promising to legalize.  However, things have not changed quick enough for most in the field, and the appointment of former Toronto chief of police Bill Blair to lead the changes has made it  clear the government intends […]