Another huge victory has brought life back into the oldest medical cannabis dispensary in the world.  After initially passing bylaws in Sept to license cannabis dispensaries without allowing any consumption on site, on Thurs Nov Victoria city council has voted 7-1 in favour of granting the two oldest clubs in town an exemption.  The approximately 6 weeks the Box was shut down felt like a lot longer but it will soon be a fading memory as members are once again safe to spark up amongst friends.

Since the Victoria Cannabis Buyers Club is the only one to have managed a safe inhalation room, there is no doubt this amendment to the bylaws is intended to allow the VCBC to continue to operating as it has for over 20 years.  With hundreds of people using the space each month, there is no doubt city councilors heard many complaints about the new bylaws when it was shut down.  Having a long history of providing space for members to smoke or vapourize, the VCBC has been so discreet that the tenants in the condo next door did not even realize we had a smoking room until this exemption was granted.

When the bylaws were introduced several councilors asked staff direct questions about this specific issue and in my opinion city staff were not honest in their answers.  The bylaw is clear.  In a letter given to the Green Ceiling, “As of Sep. 22, 2016 the cannabis related business regulation bylaw has been adopted and under section six a person carrying on a cannabis related business must not c) allow a person to smoke, vape, consume or otherwise ingest cannabis or products containing cannabis on the premises,”  Staff should have made it clear to the councilors that this bylaw would be enforced strictly and that there was no room for exceptions. 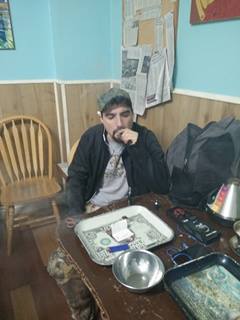 Three councilors spearheaded this initiative, Jeremy Loveday, Charlayne Thorton-Joe and Marianne Alto, though it seems clear all but Geoff Young were very supportive. City councilor Marianne Alto was very clear in her statements to council when the bylaws were passed. “I think that managing on-site consumption will help us manage public use and will also help us manage unwilling exposure.”  Likewise, councilor Jeremy Loveday stated that, “They need a safe place to do it. That’s one example why having a safe space for people to consume their medicine, if they legitimately need it, makes sense. They shouldn’t be forced out into the street,”

Unfortunately there seems little interest in city council to give other organizations, like the Green Ceiling, the same opportunities.  “I think there’s particularly compelling arguments in the non-profit societies for allowing people to consume the substance,” Isitt said. “I think that argument’s a bit weaker in the for-profit establishments, where I personally don’t see a pressing need to allow people to consume the product.”  Ben Isitt  This seems like a difficult line to draw in the sand but one council intends upon sticking to.

Meanwhile the Green Ceiling has been fined 6 times for allowing cannabis smoking.  Weekly protests are being held at the John A MacDonald statue at city hall every Thursday at 420 to collect signatures in support of the lounge.  It is uncertain when the city will file for an injunction in the Federal Court of Canada to shut the doors, but it is eminent.

Now that the VCBC safe inhalation room has been approved by the local government, the next battle is to convince the province that safe consumption sites need to be a big part of their legalization scheme.  Clearly BC could have a huge tourism industry focused specifically on cannabis consumers but only if lounges are allowed.  Allowing vapour lounges will be entirely up to the provinces and local health authorities and one of the main jobs of the BC Independant Cannabis Alliance is to convince these entities of the value and safety of these facilities.

Hopefully other city councils will follow the lead of Victoria and begin granting location exemptions to consume.  The exemption granted to the VCBC is the first of its kind in the country but it is very clear every city in Canada should have spaces for patients to quietly consume their medicine protected from the weather, thugs and police harassment.  As we march forward into a legal scheme, let us hope all levels of government work together to help manage these safe inhalation facilities.