Deprecated: The $control_id argument is deprecated since version 3.5.0! in /home/oq5ayjaeetjt/public_html/wp-content/plugins/elementor/modules/dev-tools/deprecation.php on line 304
 Cannabis Dispensaries and the Meaning of Civil Disobedience - Cannabis Digest
Skip to content

If you look at the cover of the May 2016 issue of MacLean’s, you will see a pastiche of cannabis dispensary photos overlapped by a bright yellow circle. In the circle are the phrases: A DRUG DEALER ON EVERY CORNER; ridiculously easy to buy; completely out of control; with the addition of the words, ‘Justin Trudeau,’ and ‘legalize pot.’ If you read further you encounter more of the same. From a researcher at the Centre for Addiction and Mental Health, for example, you hear that we are in “a lawless state where everyone does what they want.” The MacLean’s piece, written by Michael Friscolanti, is not wholly negative. Veteran cannabis activist lawyer, Kirk Tousaw is quoted on the importance of dispensaries, and prominent activist Dana Larsen, on the subject of civil disobedience. Tousaw represents 35 BC medical cannabis dispensaries; Larsen has just completed his OverGrow Canada Tour during which he distributed, free of charge, over a million cannabis seeds to be planted this summer across the country. BC dispensaries, confirms Friscolanti, are following the lead of early advocates of medical marijuana, who “blazed the initial trail.” 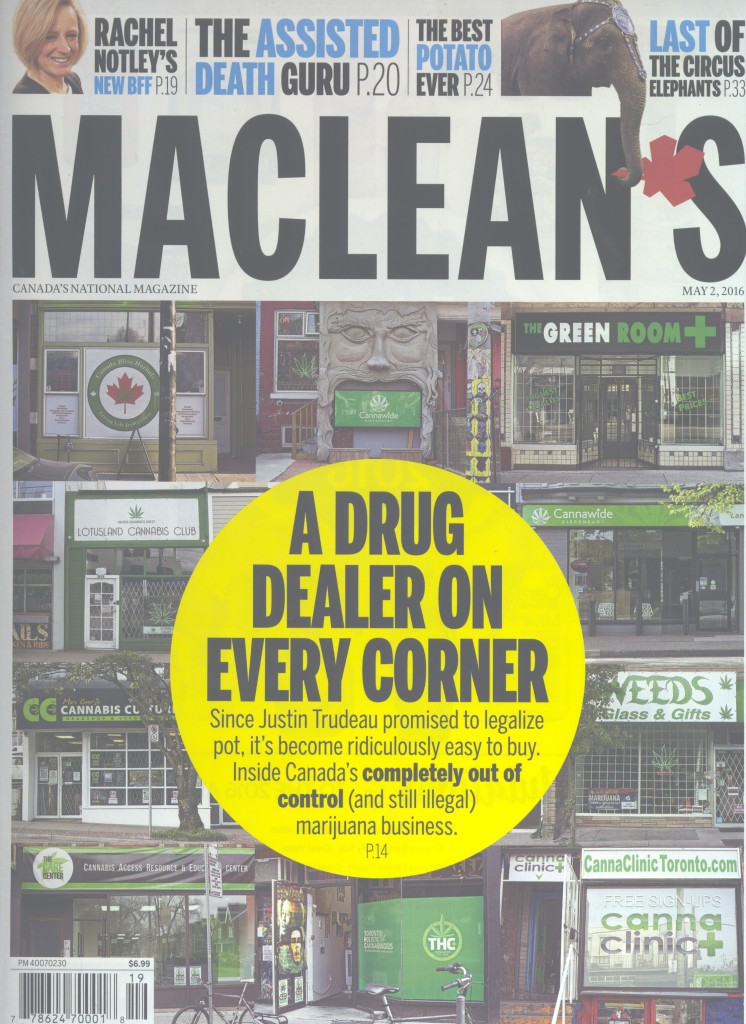 Elsewhere in the media we hear the Vancouver dispensary scene referred to as “the Wild West.” News reporters ask aloud how, amidst such defiance of law, citizens are to judge what laws to break. By the standards of reefer madness, such media reporting is balanced. But it isn’t good. The headlines and the choice of analogies remain alarmist and feverish. An exploration of civil disobedience, its nature and its purposes, is one way to cool the fever. And if it can’t cool the fever, it can at least clarify in our minds which of the feverish claims are unfounded, and why.

The phrase ‘civil disobedience’ is traceable to the work of 19th century American anarchist/libertarian, Henry David Thoreau, who famously refused to pay a poll tax to support the Mexican-American war. In Civil Disobedience, published in 1849, Thoreau expressed the idea that it is a civic duty to follow the dictates of conscience; that governments and law enforcement are dangerous; and that they must be designed carefully to do as little harm as possible. Gandhi, the 20th century’s best known civil disobedient, was a self-acclaimed student of Thoreau’s writings. So was Martin Luther King. The movements for peace, civil rights, women’s rights, native rights, animal rights, and environmental protection have all made use of civil disobedience. Occupy Wall Street was an exercise in civil disobedience. So are tent cities. And so are storefront medical cannabis dispensaries, some of the growers that supply them, vapour lounges, bakeries, and cannabis testing laboratories.

Civil disobedience is not chaos. Neither is it rule breaking, or general law breaking. Rather, it is an orderly set of actions common to democratic, or would-be democratic states. Here are some of its important features.

3. Civil disobedience is more effective than legal protests. Some critics argue that in a democratic society, where laws can be changed through voting, there is no place for breaking the law. Certainly you could stand on Parliament Hill with a sign that reads: ‘legalize cannabis,’ and hand out pamphlets. But you would not get the fine points of your message out that way. Mainstream media give almost no space to dissenters of this kind. And governments routinely ignore them. Protesters should not be expected to spend a lifetime advocating for change they will likely never see. Even in a democracy, unjust laws must be broken.

4. Civil disobedience is non-violent. Interference with the liberty of others is decidedly uncivil, and serves only to alienate potential allies. In this sense acts of civil disobedience are hardly out of control.

5. Civil disobedience in a democratic state is not in itself a crime. If you are arrested, it is for crossing a particular line, not for being a civil disobedient.

6. Civil disobedience shows respect for the rule of law, an essential trait that distinguishes it from criminal activity. Those who engage in civil disobedience are prepared to accept the legal consequences of their acts: arrest, prosecution, and possible jail time. Vancouver cannabis dispensaries, for example, are prepared to pay fines, and to take their issue to court if it comes to that. I add that allegiance, more generally, should be to the ideal of a just society, and not to this or that elected government.

But there will be chaos, critics say. People will go about breaking any law they want to break. The simple response is that civil disobedience is not a flu virus. There is no historical evidence to show that it leads to general disobedience. The legalize cannabis movement has been a decades long series of civilly disobedient acts, none of which has led to looting, arson, or other forms of destructive behavior. Someone may ask: what if everyone broke the law? But there is no such thing as a society in which everyone breaks the law, and there never has been. The media-led panic on dispensaries as “completely out of control” has no foundation in reality.

But we have reverted to a condition of the “Wild West,” journalists report. I must say that I find this idea appealing if only because it is such an interesting counterpoint to “Lotus Land,” the usual pet name for BC. BC was never the Wild West. Military and law enforcement personnel were here long before any settlers arrived. Ditto, pretty much, for the rest of the country. I suspect, though, that what critics have in mind is the American Wild West. We don’t have that here, but if we did, it would have a few good features. If memory serves, it would have ingenuity, bravery, self-reliance, individual responsibility, reverence for family, and respect for the law, if not for specific laws. Of course it would be racist, but then so is cannabis prohibition. And it would be violent. But so is cannabis prohibition. And it would lead occasionally to untimely death. But so does cannabis prohibition. Non-violent resistance, sans racism, and with a touch of the Wild West, sounds about right to me.

There are, in any case, good reasons today to avoid strict adherence to the laws on cannabis. Cannabis activists continue to get the media-driven message that they are unsavoury characters, deserving of fines, arrests, and so on. This message is not endearing. Then, we have no idea what the upcoming federal regulations will look like. This lacuna provides a basis for fear; participants in the industry worry that they will have to fight for their existence once the new regulations are announced. Provincial governments, whose task it will be to decide on how to handle production and sale, have been silent on the subject. Yet we know they are being lobbied by pharmacies, liquor stores, unions, industry associations, health professionals, and American business interests. This silence is unsettling. And the City of Vancouver is playing a tough game of some kind with dispensaries. What other municipalities will do is unknown. The feds are mysterious, the provinces are silent, and the cities are confusing. In this setting, jockeying for a place in the future seems like the right thing to do.

Beyond these facts it is important to remember that political protesters, so far from being a burden to society, are essential to its health. Dissenting views are the life-blood of a free society. On this topic one can do no better then to quote 19th century liberal theorist, John Stuart Mill. He wrote: “If there are persons who contest a received opinion, we should thank them for it, open our minds and listen to them, and rejoice that there is someone there to do for us what we otherwise ought to do for ourselves.” The day activists are thanked by some level of government for contesting received opinion on cannabis will be the day of true liberation. For now, one hopes for regulations that are livable, or that can be altered to become livable. In the meanwhile, activists in the industry must do what they can to reserve a place for themselves in the game.

Agricultural economics are described as the “production, distribution and consumption of [agricultural goods and services” [1], We find ourselves today at an interesting junction in the Cannabis industry both here in Canada and abroad. The march of progress ticks along with states legalizing, medical marijuana being featured nightly in mainstream media, and the creation […]

The BC Independent Cannabis Association

Judith Stamps The BC Independent Cannabis Association: A Preface to Strategies for the Provincial Campaign Historical alternatives are the ghosts that haunt established practices. For the cannabis plant, that alternative has always been the free and varied marketplace; a network of small, medium and large growers and producers; a craft industry; and an array of […]

(article previously posted at InsidetheJar) Travis Lane Part two in a series on the Federal Cannabis Task Force Report. The task force’s report may be a big improvement on the position paper, but there is still a strong sense that cannabis is something we need to be afraid of. In the entire 54 page document, without […]