The selection of vaporizers available to the general public has multiplied rapidly over the past decade. ‘Electronic cigarettes’ have become so popular that the Oxford English dictionary proclaimed ‘Vape’ as 2014 word of the year.  As an alternative way of acquiring the active compounds from a plant, vaping provides a less harmful method of achieving a rapid onset of effects than smoking. Vaping is discreet and efficient, creating very little smell and wasting less cannabinoids and terpenes to the intense heat required for combustion.

I have previously reviewed the Volcano Medic vaporizer for Lift, which is a table top device suitable for vaping at home. Portable vaporizers like the Pax, Magic Flight and DaVinci models could prove very useful to patients on the move who need to have a quick response to their acute symptoms. Depending on the model, portable vaporizers can be used with a variety of materials such as concentrated solids, (shatter, wax, budder, rosen, etc.); liquids (e juice, BHO, RSO, honey oil); and ground up raw herb.

I decided to investigate one of the newer models from Zeus Aresenal, the Zeus Smite. The Smite is made of anodized aluminum, a process which increases resistance to corrosion and wear, it also gives it a soft textured surface. It is black, about the size of a pack of cigarettes with a signature ‘Z’ heat vent on the side. The Canadian made vaporizer is about half the weight of the similarly designed Flowermate 5s, another popular portable vaporizer.

Although it is a fairly simple device, I found the short Tutorial Video helpful when getting started. The mouthpiece is stored in a compartment inside the bottom of the device. On the top of the Zeus a compartment opens to reveal the bowl with a ceramic heating element and a fine mesh screen inside. Ground herb is added to fill the bowl and the mouthpiece screwed into place on the top. Tap the single button on the side five times to turn it on. The button lights up and begins blinking to indicate that it is heating up. Pushing the button again changes the temperature setting.

The Zeus Smite has three built in temperature settings, Blue 198; Purple 204 and Red 212. The lower temperature setting vaporizes the lighter (monoterpenes) (myrcene and limonene) providing a tastier draw; the highest setting vaporizes more terpenes and cannabinoids, issuing a denser vapor. While these settings may help the user find the flavour preference, they may also help limit the range of cannabinoids inhaled, excluding those at a higher temperature such as CBN. CBN is known to lead to the “couch lock” muscle relaxing effects that aren’t always suitable or necessary. The lower temperatures ensure the absence of Benzene, a toxic gas that is present in combusted plant material.

The device comes with a power adapter and the battery offers approximately 3 hours of continuous vapor. The bowl is sligtly smaller than other models and will need to be changed many times during that 180 minutes of vaping. The package includes spare screens, a packing tool and a cleaning brush. Mine also came with Sunglasses and a Free Bolt Grinder as part of an offer from TorontoVaporizer. The Zeus Smite is in the lower price range for portable vaporizers at $129 and comes with a one year warranty on manufacturing defects. 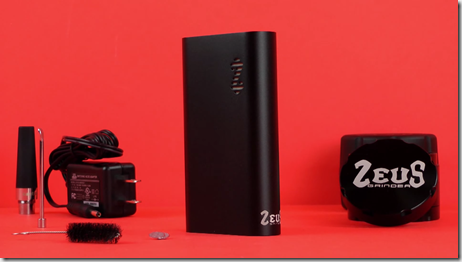 I asked a few medical cannabis patients who have some familiarity with vaporizers to try the Zeus and tell me what they thought. Using a very odorous variety of ground cannabis flower, the flavour was maintained, which is sometimes not the case with inexpensive vaporizers. All three agreed that it was easy to use and gave them flexibility in producing the thickness of vapor that they prefer. One person thought it was not discreet enough and preferred to use a vapor pen and another preferred the tabletop Volcano vaporizer for its more flexible temperature gauge.

You can watch the Zeus Arsenal video trailer for a bit of fun. The association between cannabis and Greek deities has been the target of recent historical research, pointing to the ancient Greek use of cannabis in the Smoke of the Oracles as well as in the nearby Scythian vapor baths recorded by renowned Greek historian Heroditus.