After 20 years plus of using various dates to raise awareness about cannabis on International Medical Marijuana Day, a day to celebrate, with special meaning for many cannabis patients in Canada, has been chosen. Last year the Supreme Court of Canada handed down a unanimous decision protecting the rights of patients who choose to use cannabis extracts. The decision came down on June 11th in the trial of Owen Smith, former head baker for the Victoria Cannabis Buyers Club. It only makes sense to move the date of the IMMD to this meaningful day.

Since June 11 is generally a nice day, we hope to encourage individuals and activist groups across the world to host picnics in public parks, so patients and their supporters can gather to share some cookies or other treats. In Victoria, the International Hempology 101 Society will host a picnic starting at 4:20 pm on Sat June 11 at what is known as the Mushroom Tree in Beacon Hill Park (near the bandshell). As opposed to other years when we have held rallies, the intent of these picnics is not to protest but is meant to provide a safe space for patients to enjoy their medicine with others.

Certainly sharing cannabis cookies on International Medical Marijuana Day is nothing new. The idea came to me in 1999. With little warning, I made 101 cookies and handed them out at a rally in the inner courtyard of the downtown public library in full view of a police officer and the press. When I showed up with 420 cookies the next year, things did not go so well. I was arrested and eventually convicted by a jury of possession for the purposes of trafficking THC. My sentence was 1 day in jail, which was really less than 3 hours.

The origins of International Medical Marijuana Day go back to Nov 15, 1994 in Washington DC and other cities across the USA. After learning of this historical fact, we started to organize events on Nov 15, 1995 to coordinate with activists down South but no solid contact was made. In fact, several years ago we learned US activists were organizing a week of events in Feb and we tried to do the same here, but again failed to make direct contact with organizers across the border. A few years ago we simply moved IMMD to March 17, St. Patrick’s Day, in a desperate attempt to direct people away from alcohol and over to a greener, more friendly product.

With so many positive developments for patients, there is a lot to celebrate. Starting with the Owen Smith decision last year, a new federal government promising to legalize for all adults, and a recent court decision that ensures patients’ rights to grow their own medicine in a program that must come into effect this summer, the last 12 months have been the most exciting the Canadian cannabis culture has ever seen. The proliferation of dispensaries has also made access easier, increased the range of products available and helping undermine the fear of cannabis..

Over the years we have tried many different approaches to raise awareness about medical cannabis. Since 2002, the City of Victoria has officially acknowledged International Medical Marijuana Day with a proclamation that makes several statements directing citizens to respect patients choosing to use cannabis as medicine. It is our hope that other civil rights activists will learn how easy it is to request their city council do the same this year, much like other activists have used proclamations to raise awareness and public support for their causes.

Getting your city to proclaim June 11 as International Medical Marijuana Day might not be as hard as you think, depending on how conservative they are. All you need to do is send a letter requesting council pass the declaration, along with the proclamation. To make is easier, I have included a sample letter here.

Hope you are having an excellent day.

On June 11, 2016, citizens around the world will be celebrating International Medical Marijuana Day with picnics and other activities. Since almost every other activist network seems to have a day put aside to honor their struggle, it only seems fitting that patients who use cannabis also mark a date on the calendar as their own.

This date marks the anniversary of the Owen Smith decision last year by the Supreme Court of Canada which gave patients the right to make and use cannabis extracts, rather than just using the raw plant material, which the original regulations restricted patients to.

Therefore, I humbly request the city proclaim June 11, 2016 as International Medical Marijuana Day. Thank you for your time.

WHEREAS Cannabis has been used as a medicine since the beginning of recorded history; and

WHEREAS Governments around the world have commissioned many large, comprehensive studies on medical cannabis, with every one to dat recommending legalization, decriminalization and/or more research; and

WHEREAS Science is proving that cannabis is an anti-inflammatory, muscle relaxant, anti-biotic, anti-septic, anti-fungal, anti-emetic, and pain reliever, amongst other medical benefits; and

WHEREAS Courts have recognized basic human rights include the right to access to cannabis for people suffering from incurable diseases and chronic pain; and

WHEREAS Governments and community groups around the world are growing, distributing, and researching cannabis for medical purposes.

One of the best parts of asking the city to make this declaration is that they give you a really nice printed copy, with a fancy seal and the mayor’s signature, that you can proudly hang in your business or home. The process costs no money. The worst thing that can happen if you try is the council will vote against it, hopefully making a bunch of ignorant comments that get quoted in the local media.

Our society has also organized a silent art auction on IMMD for many years, as we have almost been constantly fighting in court. We will be encouraging organizers of other picnics to hold small auctions or raffles to support a local court case or patient that has suffered the wrath of the law. This year we will likely organize both a silent art auction at the Victoria Cannabis Buyers Club and a raffle at the picnic, with funds going to the VCBC to help pay for the costs of going to the Supreme Court of Canada last year..

Silent auctions are a great way to raise funds and awareness for a cause but it does take some work and a commercial space willing to display art and bidding sheets. Some places that do not have a willing dispensary may have to resort to one or two pieces of art in a head shop or local cafe, as often wall space in a store is hard to find. Make sure you put minimum bids on the really nice art. Since the bidding ends at 4:20 exactly, you might want to bring the art to the picnic for any last minute offers.

Raffles will be much easier for most people to organize, giving local cannabis businesses a chance to display some of their wares, and others a chance to give some of the arts or crafts they have made. If there is not an obvious place to donate the money, like a dispensary or a patient that has been raided, then hopefully organizers will be able to agree on where any funds go. With so many sick children starting to use cannabis oils to control their seizures and other medical problems, it should not be hard to find the right place to send help. 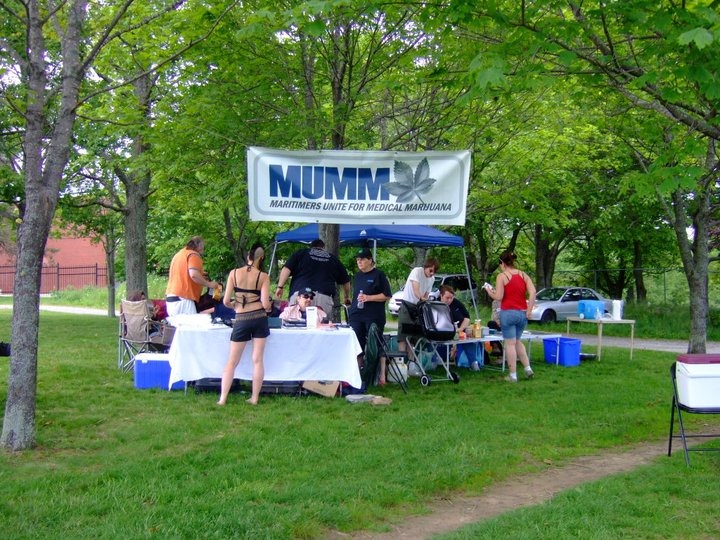 Some picnics might not have organizers prepared to do any fundraising, and, honestly, that is not super important. These events are really intended to provide a chance for the cannabis community to gather together in a nice place and relax. Of course, a few bakers will be keen to share their goodies, either because they hope to establish a market for their treats or because they love sharing their favourite foods. For the most part, though, this is intended to be a non-commercial celebration.

Early into this campaign it appears we have friends interested in organizing picnics in 10 cities across Canada, including 5 provincial capitals! While exact locations are still being determined, more information will be coming out as the date approaches. Since it is only a picnic, we expect volunteers to announce locations up to the last minute so everyone who wants to can be involved in International Medical Marijuana Day, even if it is only a handful of friends smoking joints and passing around brownies.

Anyone interested in organizing a picnic in their area for International Medical Marijuana Day should contact me at hempo101@gmail.com. Really all you need to do is pick a nice spot for a picnic that others will be able to easily find. Posters will be made available with a space to add the location, making it easy to print and distribute.

Previous article Cannabis Dispensaries and the Meaning of Civil Disobedience

Next article Cannabis Conversations at the Victoria Library Cancelled

GoFundMe: Cannabis Oil to the Supreme Court of Canada

Rhys Corson·June 21, 2018
There are no comments yet No comments