The first compassion club or marijuana dispensary in the Ottawa area was Cannapharm, which opened in 1998-99; it was short-lived. It got busted, and there was neither the money nor the wherewithal at the time to keep the dispensary going.

In the summer and autumn of 2002, Christine and I ran an informal compassion club out of our apartment on Bayswater. Once a month, about twelve people would call a cell phone and make an order, and we would let them come to our apartment on the same day and buy some medicine. We never made a dime; it was all volunteer work, and a tremendous hassle as well.

That was the beginning of what would become The National Capital Compassion Society. Someone started it with $1000 and a pound of donated weed. But after another someone mentioned indiscreetly that it was being run out of the back of a local boutique, responsibility was tossed to us. By the next summer, not-for-profit paperwork had been filed, and the once-a-month appointments were being held in an apartment in a shabby building on Gilmour Street. By the following summer we had an actual office just off of Bank Street. The whole operation was closed in 2005 for three reasons: we didn’t have enough patients for it to be financially sustainable, the police found out about it after a volunteer set off the alarm and didn’t get the code correct; and someone at Cannabis Culture Magazine published the address.

A while back, a couple of yahoos from Victoria blew into town and just opened a place on Somerset in a fairly shabby building. They didn’t contact any of the local activists, any head shop owners, or anyone on City Council. They just opened, and were open for less than two weeks, receiving a soft bust (where the cops come and tell you that they are coming back tomorrow and if you are still selling pot, you leave in cuffs.)

But today, Ottawans have several ways to access marijuana for medical purposes (aside from mail-ordering it from some other city’s dispensary, as I am sure many patients do). There is Franco Vigile’s Ottawa Medical Dispensary (O.M.D.) on Carling Ave. which was opened in 2015 and serves approximately 1000 patients. Vigile was able to clearly communicate to the City Council the benefits of providing safe and convenient access to the people with prescriptions that are in need of this medicine. He is already preparing to open two more locations in the Ottawa-area communities of Kanata and Sittsville.”

Don Briere owns the tiny Weeds Gifts and Glass on Montreal Rd, just a snowball’s throw from BuzzOn. They offer an array of bud, shatter, edibles, and coaching for people who can prove a medical need. They have been quite busy since opening on February 26th of this year, and opened a second location on Bank Street on June 15th, serving over 1000 patients through these two locations.

Patrick Lavigne runs Capital City Cannabis Clinics, which is on Bank Street in the south end of Ottawa. It is a full-on dispensary, providing a range of cannabis products. They opened in early April and have not yet had any official visits from the police. They currently serve 138 patients, but their membership grows by three patients per day.

There are also some delivery-only dispensaries, like Erba Organics and Capital Med Delivery, run by BuzzOn-affiliated Wayne Robillard. Wayne has only been open since the end of May of this year, and already has 19 customers

Then, for the beginners or the squeamish, there are the information centres, the places where no marijuana is sold or used on premises. For a fee, these places will help patients talk to their own doctors, connect them to more-up-to-date doctors who will be willing to sign paperwork, and help them navigate the MMPR paperwork and variety of delivery and dosing options that the LPs offer.

National Access Cannabis on Wellington, run by former RCMP officer Derek Ogden, and InfoCannabis, on Notre Dame Street in Embrun, which is about 36km southeast of Ottawa. The latter has consultants in four provinces.

What the future holds for these badly needed services is a mystery. If I had been asked, even a year ago, if I thought there would be a handful of thriving dispensaries operating in Ottawa a year later, I would have said “no.” Crime is so low, the police so feckless, and nimbyism so deeply ingrained in this drained swamp of a town that I am completely at a loss to explain how any of this is actually happening. 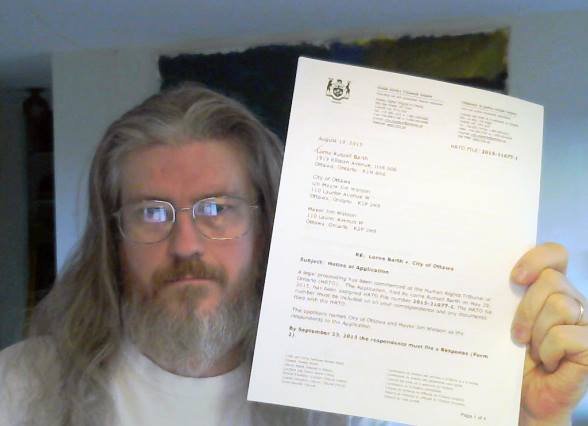 In other Ottawa news, I lost my Human Rights case against the City and Mayor of Ottawa. The ruling stated that because I was not subjected to any particular discrimination – as in being refused housing or services or whatever – then the Mayor’s comments did not constitute a violation of The Ontario Human Rights Code. That was the City’s argument in their original response, so I am not sure why the Tribunal didn’t stop it then, instead of moving on to the phone hearing.

I would like to thank Kevin Hall at Chronic Pain Toronto who handled the phone hearing for me and put together a case far better than I would have been able to muster.

Even though I lost, the local media (Citizen and Metro) portrayed me as someone who doesn’t back down from a fight and who will go on to fight again, despite the defeat.

Next article Who Sits On The Federal Task Force on Cannabis?

Ted Smith·January 5, 2015
There are no comments yet No comments

Liberal Thoughts on Regulations for Cannabis