Deprecated: The $control_id argument is deprecated since version 3.5.0! in /home/oq5ayjaeetjt/public_html/wp-content/plugins/elementor/modules/dev-tools/deprecation.php on line 304
 A Convict and a Gentleman: Marc Emery Beyond Prison - Cannabis Digest
Skip to content 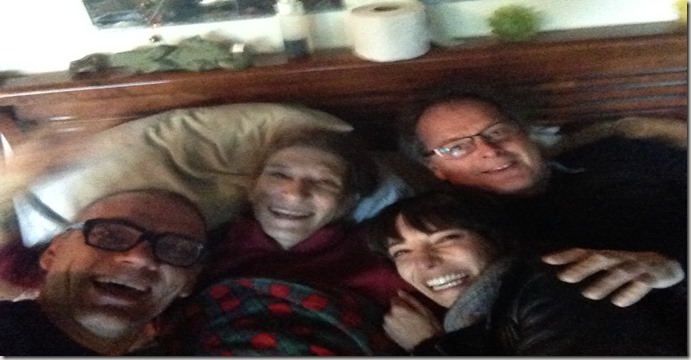 (Ted, Gayle, Marc and Jodie cuddle up for a photo)

After over 4 years in jail one would suspect the first thing Marc Emery would do is run away and hide for a romantic weekend with his beautiful wife, Jodie.  Instead, he actually went out of his way to pay a special visit to see me and my love, Gayle Quin.  It was a wonderful evening for the four of us, full of stories, revelations and dreams.

For a few reasons it is almost shocking Marc would come see me at all.  He has never paid me a personal visit and we have clashed on several occasions.  Though we have worked out any issues between us long before he went to jail, our relationship has mostly been on a professional level and we seemed quite different, except for our love of cannabis. 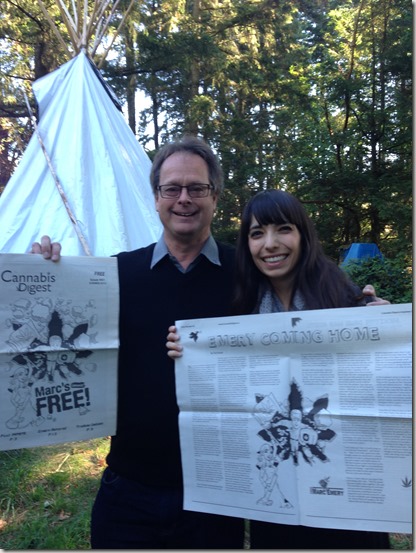 (Marc and Jodie show off the Summer Cannabis Digest Feature)

However, we have a long history together, with perhaps Dana Larsen and Chris Bennett being the only other two activists that have worked continuously in the west coast field as long.  It was almost 20 years ago I stumbled upon his scene in Vancouver and began attending the Hempology 101 meeting being organized by the Hemp BC manager Danna Rosek.  It was at one of those meetings the group came up with the name Cannabis Canada for the new magazine he was publishing and I typed in the business directory of the first issue.  Then on April 23, 1995, St George Feast Day, we held a rally in Victory Square which I hosted while speakers like Marc and Reverend Leroy Campbell educated the crowd.  After that I moved to Victoria to spread Hempology 101.

(Gayle Quin in the garden)

Unfortunately the reason Marc was here was not to hash over old times, it is because Gayle is fighting cancer and he was afraid she might not be around when they got back from their big trip to Europe.  We did not speak about our deceased friend, Michelle Rainey, but it is clear that her death from cancer while he was in jail has affected him.  They did not part on the best of terms and he is not going to let anything like that happen again.  Life is too short to allow our differences to become barriers.

Jail has seemed to change Marc, much for the better.  Gone is the frantic, brash cynic, looking to exploit every opportunity to be the center of attention.  The slow life of a prisoner has brought a gentle calm about him that I have never seen before and that I hope stays.  Do not get me wrong, he is still a very ambitious man and is going to be very busy now that he is free from his shackles.  He has done the hard part and now it is time to let others do the heavy lifting.

Speaking of heavy lifters, it is Jodie who is really getting ready to take things to the next level by running for the Liberals in the upcoming federal election, facing off against her friend, veteran NDP MP Libby Davies.  The national press seems to love her even more than Marc, with the National Post calling her Cannabis Queen as she filed her nomination papers this week.  She truly is amazing, and her beauty and intelligence are turning her into a star based on her own merits.  Gayle adores her and gave her the shawl/wrap that is in the picture.

(Jodie with the shawl/wrap that Gayle made for her)

It was very interesting discussing how the cannabis culture has evolved while Marc has been in jail.  We chatted about the new medical program and we were very happy to hear he was hesitant to even visit a large Licensed Producer for fear of appearing to side with big business while patient’s gardens are being phased out.  The explosion of dispensaries in Vancouver has been a wonderful sight for him to see.

Luckily he does not have any truly scary stories from his experience behind bars and seems to have managed enough pleasant memories that the whole ordeal does not sound as terrible as one might fear. Learning to play bass guitar in jail was both a perfect distraction and opportunity to find some inner peace in the music he was making with others.  He does not seem bitter or angry about what happened, which likely made the time inside easier spent and allows him to walk out with his head held high.

(Marc taking a walk in the woods)

Showing them around Gayle’s property was a joy.  She is going to call it Cobble Herb Retreat, in the hope that activists and friends come to visit to spend time with us to enjoy the healing space we are creating.  Marc jumped at the chance for a far-infared sauna (Jodie was too tired) and was very happy to get to pick blackberries for an afternoon snack.  Though we did not get a chance to have a fire in my tipi, hopefully they will come back again and we will have a number of people over for a gathering.

In conversation Marc speculated at what he might accomplish next.  With great momentum rising in the USA, there seems little in the way of cannabis becoming legal around the world.  Little, except for people like the Pope.  That is right, Marc is seriously considering organizing a protest on the front steps of the Vatican itself.  After all, the Roman Catholic Church could be seen as the father of prohibition.  In fact, the Pope recently made statements denouncing cannabis again and someone needs to make him pay for those ignorant statements.  Who better than the fearless Prince of Pot.

Though it is sad that the reason he came to see us right away is because Gayle is so sick, we feel honored to know that Marc and Jodie went out of their way to see us before taking off around the world.  They are a very special couple, and now that is nightmare is over they can carry forward knowing that the sacrifice they made has made a difference and that the world is becoming a better place for their efforts.  It is time for Marc and Jodie to enjoy life a little bit more and we are blessed it started by paying us a visit.

BC Government’s Survey on Consumption Lounges

In this past summer issue of Cannabis Digest, I wrote about the closing of a compassion club that had been in exis- tence for 10 years in Halifax—the Hali- fax Buyers’ Club of Canada. The outlet spearheaded by John Cook has been forced to close up shop due to John’s ill health. Since then many […]