During the 20th century, as modern pharmaceutical products began to replace herbal formularies, cannabis medicines came up against severe opposition in the form of an international prohibition. Doctors were jailed for prescribing it as 1940’s propaganda rippled out across the radiowaves. Cannabis was pushed into the shadows as modern technologies emerged to help form the world we know today. Despite this oppressive reproach, inquisitive scientists were eventually able to both identify the plants’ unique molecules and how they interact within our bodies.

Pioneer scientist Roger Adams first discovered THC in 1940 and Dr. Raphael Mechoulam synthesized it in 1964. In the 1990s, scientists discovered the receptor sites for THC in our brain. These discoveries represented the dawn of scientific light on a very promising new field of research. A recently made free to watch documentary “The Scientist” takes a look at Dr. Rapheal Mechoulam’s life work. A PubMed search now reveals over 3300 studies on the endocannabinoid system.

The endocannabinoid system has been identified in the central nervous system of many vertebrate species, including species as primitive as a sea sponge, and is estimated to be approximately 600 million years old. There is strong evidence emerging that the Endocannabinoid System (ECS) interacts with other neurotransmitter systems, making it an important key to understanding our health. The more we learn about the ECS, the less mysterious the medicinal effects of cannabis become.

There are two types of endocannabinoid receptors (CB1 and CB2) located on the surface of our nerve cells. They have a particular shape that only fits certain molecules: cannabinoids. They are uniquely located on the presynaptic nerve, the nerve that is firing the electrical signal. Cannabinoids adrift in the space surrounding the nerves bond to the receptors, activating their many functions.

“Among these functions, the ECS is involved in neuroprotection, modulation of nociception, regulation of motor activity, neurogenesis, synaptic plasticity and the control of certain phases of memory processing. In addition, the ECS acts to modulate immune and inflammatory responses in order to maintain a positive [homeostatic] energy balance” (source). 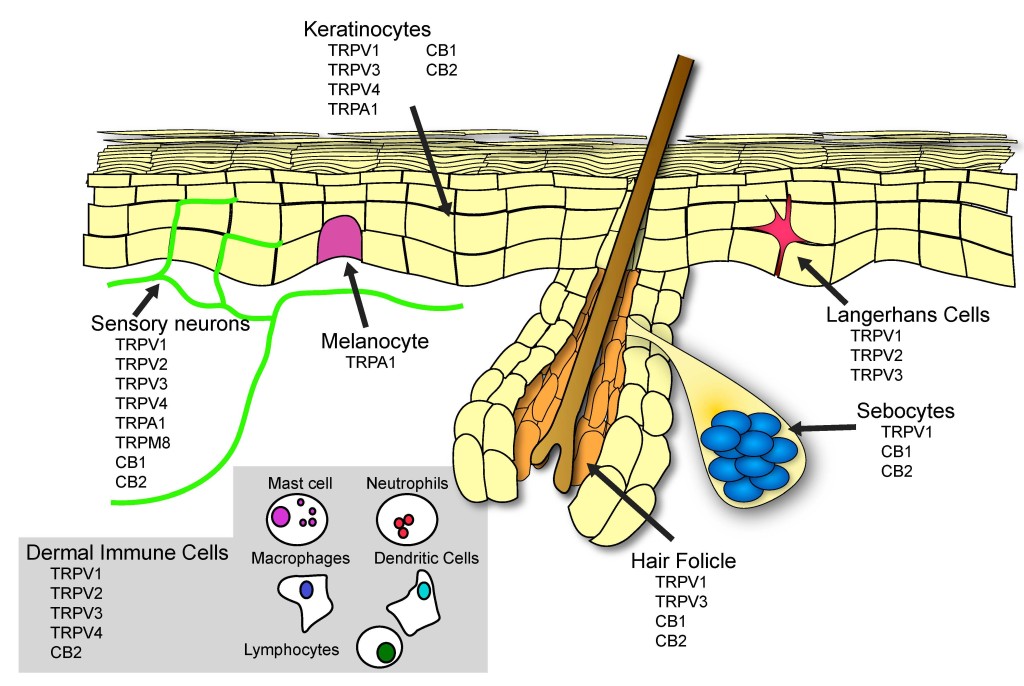 The ECS is present in the nerves of skin cells, assisting our natural protection from the drying effects of sun and wind. “It seems that the main physiological function of the cutaneous ECS is to constitutively control the proper and well-balanced proliferation, differentiation and survival, as well as immune competence and/or tolerance, of skin cells” (source). Emerging research suggests ”that topical cannabis preparations can be effective against MRSI, the deadly antibiotic-resistant flesh-eating disease” (source).

Exocannabinoids can be either phytocannabinoids (plant derived) or synthetic cannabinoids. Tetrahydrocannabinol (THC) is the most common phytocannabinoid and is often accompanied by cannabidiol (CBD) and an assortment of others such as CBG, THCA, CBC and many more. This variable array of background cannabinoids is sometimes cited as a reason why whole plant cannabis products have greater efficacy than their synthetic counterparts. THC and CBD have been synthesized with modern methods and are sold as single ingredient pharmaceuticals under the names Marinol, Cesamet and Nabilone.

Once it had been established that the human body, along with all vertebrate species, comes equipped with a system that responds directly to the compounds uniquely produced by cannabis plants, they also discovered internally produced (endogenous) compounds that work with this system. The endocannabinoid system has been found throughout the human body, in every organ, and highly concentrated in our brains.

There is an endocannabinoid compound produced in the body that strongly resembles THC called anandamide (AEA), which translates roughly as “blissful compound.” THC is stronger than anandamide, which breaks down much more readily. Scientists have also discovered five other independent endocannabinoids. “These endocannabinoids are released onto their receptors in a manner that appears to maintain homeostasis within the central nervous system” (source). The two kinds of endocannabinoid receptor sites are termed CB1 and CB2. CB1 is one of the most ubiquitous neurotransmitters in the human body and is primarily found in the central and peripheral nervous system, while CB2 is predominantly found in immune cells and the lymphatic system (source).

Endogenous cannabinoids are ubiquitous regulators of synaptic transmission in the brain, mediating numerous forms of short- and long-term plasticity, and having strong influences on synapse formation and neurogenesis. Their roles as retrograde messengers that suppress both excitatory and inhibitory transmission are well-established (source).

Exo and endo cannabinoids work together to activate the CB1 and CB2 receptor sites. In the Autumn 2011 O’Shaughnessy’s, Martin Lee explains how “CBD indirectly stimulates the production of anandamide (AEA) by suppressing the enzyme fatty acid amide hydroxylase (FAAH).

FAAH is responsible for breaking down anandamide, less FAAH means more anandamide remains present in the body for a longer duration. More anandamide means greater CB1 activation. CBD also stimulates the release of 2-AG, another endocannabinoid that activates both CB1 and CB2 receptors” (source). Tylenol (acetaminophen) works in part because it inhibits the breakdown of the anandamide, allowing more to remain active longer.

It is clear that we have just struck the tip of the endocannabinoid system iceberg. Some are suggesting that this discovery may eventually be seen as one of the most important of the late 20th century. Drugs that blockade the endocannabinoid system such as rimonabant and taranabant have been shown to oppose self-healing mechanisms and elicit adverse effects (source). It is now being explored whether a deficiency of cannabinoid activity may also incur negative health consequences.

What the Judge Said on Patients’ Rights, and What Health Canada Can Do Next Judith Stamps Canadians who are ill, and who believe they are obtaining relief from cannabis, have a constitutionally protected right to grow their own medicine. So said Justice Michael Phelan of the BC Federal Court on February 24 2016. At least […]