In 2015 Jamaica became the first Caribbean country to decriminalize cannabis, despite its obligation to international drug treaties and pressure from the US. Given the fascinating and popular musical culture associated with heavy uses of ganja, either through a chillum and steam pipe, or a big head spliff, this legislation, according to many, was long time overdue. The Ganja Bill is what this new legislation was called, and it was Jamaica’s first legislation to acknowledge the Rastafari Community’s sacred use of Ital Herbal Sacrament. Under the Ganja Bill Jamaicans have the right to grow five plants in their households for traditional uses, which range from making teas to tinctures. The decriminalization of small quantities of ganja (2 ounces or less) was also a major feature of the the Ganja Bill. Critical to note is that this new legislation authorized the expunging of criminal records of those Jamaicans who were previously convicted for petty ganja offenses from as far back as the 1960’s.

As guided by scientific data from as early the 1960’s, the rebuke of Rastafari, and the work of lobbyists, Jamaica also legalized ganja for medical and scientific purposes, and sacramental rights were granted to the entire Rastafari Community in Jamaica. But although the Jamaican Ganja Industry had now been conceptualized, there remain issues in its operationalization because, until now, there were no rules to the game. Soon after the Ganja Bill legislation was adopted, the Cannabis Licensing Authority (CLA) was formed as a body to regulate Jamaica’s new Ganja Industry. This CLA body consisted of 16 members with diverse social and academic backgrounds, and included representatives of the Rastafari Community. The immediate task of the CLA was to construct interim regulations for Jamaica’s ganja industry, which were eventually delayed by what some Rasta’s call a ‘mystic change-of-government.’ In February of 2016 the Jamaican Labour Party (JLP) was elected by the people, and surprisingly after election, some 14 of the original 16 members of the CLA body were still on board. 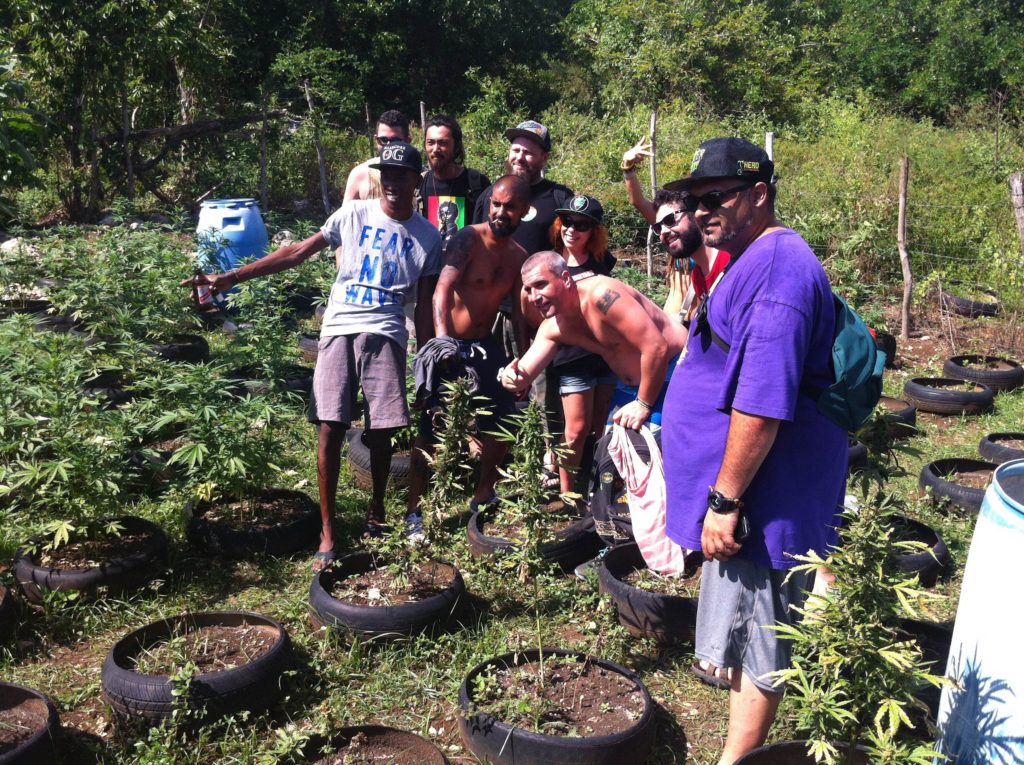 In May 2016 the Cannabis Licensing Interim Regulations were published online, and discussed all throughout Jamaica’s social media. In June, to educate and further dialogue with the Jamaican people, the CLA in a collaborative effort with the Ganja Growers and Producers Association (GGPA), convened a series of talks throughout the island. According to Ras Iyah V, who is a member of the CLA, “these talks were also to allow small farmers and other grass roots participants to make suggestions to the CLA, and to have an input in the further development of what is only an ‘Interim’ Regulations of the Jamaican Ganja Industry” (Coversation with Ras Iyah V, July 5 2016). So what are the interim regulations of the Jamaican Ganja Industry that the CLA has formulated, and what is its objective?

According to the CLA the objective of these Regulations is to provide for an interim licensing regime pursuant to the power conferred on the Cannabis Licensing Authority under section 9A (2) of the Act until more fulsome regulations are made under that section (Part 1. Preliminary, Interim Regulations of the CLA; cla website). The application fees for licences are only quoted in US dollars and does vary. For an individual applicant the application fee is 300$ whereas the application fee for a business, company, cooperative or friendly society licence is for 500$. According to the Regulations there are five categories of licenses that can be obtained. The categories of licences that can be applied for are: cultivator, processor, transport, retail and research and development. The cultivator and processor licence has tiers or categories; the prices for these licenses varies by the size of land. A Tier 1 cultivator licence is for $2000.00, and only allows the cultivation of up to a single acre of land, whereas a Tier 2 cultivator licence is for $2,500.00 for every 4,047 square metres, and a Tier 3 is for $3000.00 for every 4,047 metre. Then, a Tier 1 Processor licence is for $2,500.00 and a Tier 2 is for 10,000. Additionally, a transport licence is for 10,000$ for the first vehicle and a 1000$ for each additional vehicle. The retail licence is for $2,500 (Herb House) and $2,500.00 for (Therapeutic Services). A research and development licence is for $5000.00, and also includes analytical services (Cannabis Licensing Authority, Licence Application Form 2016).

The basic costs for licences and application fees are not the only requirements for a licence, of course. Other requirements include proof of land ownership or legal permission (a consent form can be downloaded from the CLA website), a three year proof of residency, Certificate of Incorporation of the Business or Company, a Tax Compliance Certificate, and the criminal records of each Director of the company is also a necessary requirement. Although each requirement to obtain a ganja license is majorly important, the most basic requirement seems to be land, which is something that the average Jamaican does not have, and its always been this way.

This article now really needs to give a quick backdrop on the history of landlessness in Jamaica. It was the emancipation period 1834-1838 that led the former African enslaved people into the bush to settle. Whilst some joined existing free societies or Maroon Communities in the Highlands, others formed their own communities on British Crown Lands, and led a fierce agricultural movement that lasted until industrialization in early 20th century Jamaica. The mid-nineteenth century Land Vagrancy Laws of Jamaica were simply established to suppress the expansion of what was a growing competitive peasant economy. Penalties for capturing uninhabited Crown Land for agricultural and other purposes dramatically increased. The Morant Bay Rebellion of 1865 led by Prophet and National Hero Hon. Paul Bogle (peace be upon him) was as a result of the persistent poverty and landlessness of the African.

Today this landlessness in Jamaica still exists, as most Jamaicans do not own the land they live on, and some are squatting on private and government lands. The illegal confiscation of 476 acres of sacred Heritage lands at Pinnacle during the 1950’s is a single example of how the Jamaican State has been undermining independent community development. To date, the Rastafari Community is still concerned about its landlessness, and despite the community’s significant cultural contribution to Jamaica, the survival of its indigenous culture is very much at stake. To some critics of the Ganja Bill and the Interim Regulation of the CLA, although Sacramental Rights for Rastafari were theoretically included in Jamaican legislation last year, the Interim Regulation of this year has strategically left out any privileges for poor indigenous groups. As for the Rastafari Community in particular, Sacramental Rights do not include the right to grow ganja for sale, yet, sacramental ganja has always been traded among community members locally and internationally. So far the only benefits of Sacramental Rights have been the right to vend ganja and ganja products at major events that have received exemption from government. Since there have only been three exempted events since Nov. 2014 til right now, many ganjapreneurs argue that not enough events are being exempted by government. To date Jamaica’s only ganja exempted events have been The Jamaica World Cannabis Cup, Rebel Salute (Herb Curb) and Stepping High Ganja Festival. Two of these three events were kept in Negril alone. 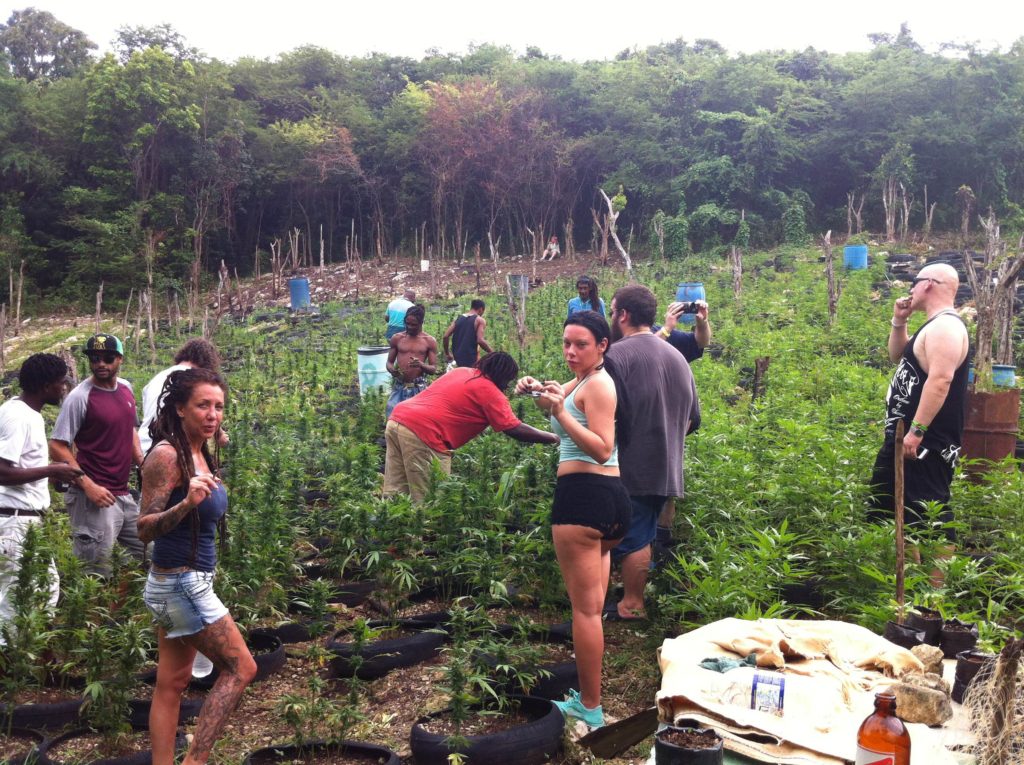 In response to last year’s ganja legislation, the Ministry of Industry (which presides over the Companies Office of Jamaica), and the Jamaica Intellectual Property Office (where trademarks are registered), have been experiencing an increase in number of applicants. Jamaicans are legally accessing lands, and are arranging these lands for the cultivatation or processing of ganja. Indeed, fences are being erected on some traditional small farms in Westmoreland, and camera systems put in place for security purposes as basic CLA requirements. Important to note is that some traditional farmers would like to make the transition from growing ganja illegally to growing for legal purposes. Such farmers are keeping abreast of information that is in circulation within their ganja parish associations, and are already forming cooperatives for obtaining a licence to cultivate or process ganja.

Some small farmers have already confirmed their partnership with members of the international community who share their goals/aspirations, and with whom they perhaps already have friendships. With this wealth of traditional ‘knowledge capital’ now being balanced with ‘money capital,’ partnership between Jamaicans and internationals may be a practical solution, and a way forward in this Jamaican Ganja Industry. And while some are willing to wait to see how this new industry will unfold, others have grown anxious, especially since they have been waiting decades for this very moment in the history of the island. Clearly, it is ‘anxious early birds’ who are manoeuvring themselves strategically for the various ganja licenses, and who may be the actual and historical pioneers of a legal Jamaican Ganja Industry that will first make its impact on the local trade market until the world is ready to trade with Jamaica.

For more info on the Interim Regulations of the CLA and/or application forms please visit the CLA website.

DEA still fighting hemp production By Diane Walsh The US Drug Enforcement Agency’s ability to rely on the Controlled Substance Act, (defining marijuana as a Schedule 1 heroin-level category drug, and for which no clear distinction between hemp and marijuana exits) is what allows the DEA to obstruct the proliferation of hemp farming across the […]

By Jerry Golick Wouldn’t it be amazing, if the very plant which has been demonized, vilified, and the focus of a veritable vegetative genocide on the part of the nations of the world, turns out to be the very best thing at helping to raise the “wellness” of our global village? Such may prove to […]