Deprecated: The $control_id argument is deprecated since version 3.5.0! in /home/oq5ayjaeetjt/public_html/wp-content/plugins/elementor/modules/dev-tools/deprecation.php on line 304
 Join the Fun with Team 420 - Cannabis Digest
Skip to content 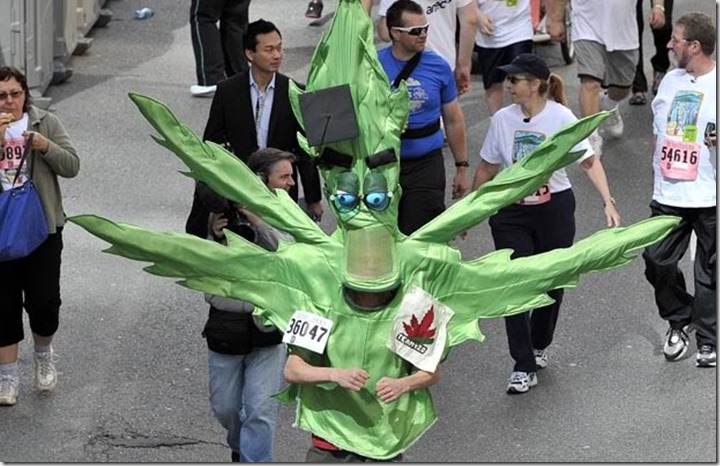 To the amusement of onlookers, Herb the 12 foot tall marijuana leaf mascot of Team 420 and Hempology 101 made his way through the streets of Vancouver spreading good cheer and mellow vibes during the 2011 Vancouver Sun Run. While outpacing many of his fellow runners, Herb had a little difficulty manoeuvring past others in the run. He even outpaced his “bong babe” and passed the meeting point, where he would have got his bong blast and a drink of water, before she arrived. Herb was a delight to onlookers and marathoners alike, and even after completing the 10 km run, Herb had the stamina to hang out with fellow runners and have several photo-ops.

Lovingly worn by Ted Smith, Herb weighs approximately 45 pounds, and stands 12 feet tall with a width span of eight feet. His shoulders and nose were rubbed pretty raw from the costume, and he was a “bit” tired after the run, but overall happy with his performance. The effort paid off. Herb was seen by tens of thousands of people, was on the Vancouver Sun’s website, and was pretty easy to spot in the crowd. There are more than 50,000 participants in the Sun Run, making it the largest 10 km run in North America. Dozens of people had their picture taken with Herb, and Gayle Quin handed out hemp hearts and information to those who were interested along the route.

Ted has been a vegetarian for over 14 years, so hemp hearts and hemp protein play an important role in his diet. He chooses to avoid soy because of the involvement of GMOs. Hemp hearts contain all the body’s required proteins and essential fats, along with numerous vitamins and enzymes, and are thought to be the only natural food to do so. They are also nearly void of saturated fats and low in carbohydrates.

This is just one part of Ted’s hemp-based healthy lifestyle. He has also been a heavy cannabis consumer for all his adult life. While the mainstream media and social stereotypes hold that Cannabis use is unhealthy, Ted and Team 420 are here to challenge the misconception.

Ted has enjoyed athletics and sports most of his life. He was in hockey from the age of five until he was 19, and played on the All-Ontario championship Juvenile team. In the summers he played different sports with the kids in the neighbourhood. This is where Ted’s sense of fair play was first developed. He says that it was especially important for the neighbourhood games because if you didn’t play fair, the game would end, and people would go home. 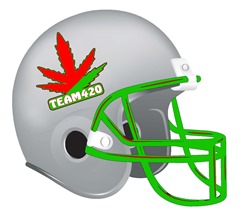 In high school, Ted took up playing rugby, a sport he continued on with in university. He was Captain of the second team in his third and fourth years of university, and in in his fifth year, he was on the varsity team. “I was the drunkest, and fittest guy on the team.” Ted says, but also states that he hasn’t drank in 15 years as well.

It was the university rugby team that nicknamed him “Acidhead Ted,” on account of his anti-prohibitionist stance and open drug use. It was these interactions with his rugby team, and experiences at this time of his life, that really lit Ted’s passion and guided him into lifelong work toward drug-law reform. Team 420 is the natural union between his lifelong enjoyment of sports and his passion for ending cannabis prohibition.

Team 420 first got together to play dodgeball in the 2009 Vancouver Islander Lager Dodgeball Championships. The team practiced together regularly against kids in the local area. Their efforts attracted a lot of interest from the cannabis community at large. They invited the community to get involved, and held a contest to design the Team 420 logo. Ultimately the team chose Owen Smith’s design, and had shirts, stickers, and other gear made. Membership to the team was open for anyone interested. The only requirement for the team was to wear a logo (purchased from the team, or home made) and to have fun! 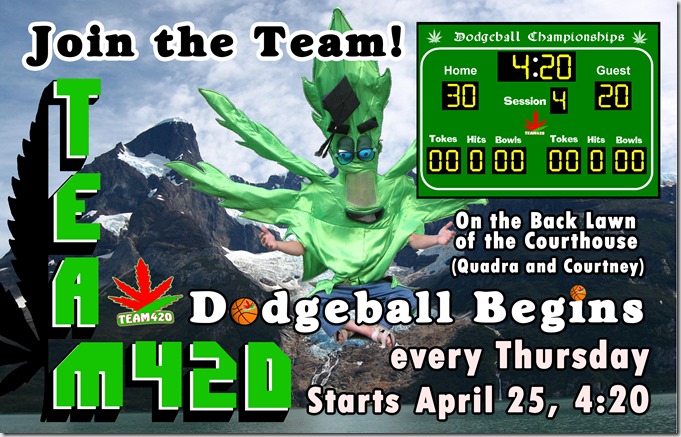 One good idea deserves another, and Team 420 Victoria started to play frisbee golf together. The outdoor nature of the game made it a lot easier to find venues for practices. They had their first frisbee golf tournament in Sept. 2009, in Sooke.

The object of frisbee golf is to hit the targets in the least amount of throws. It is a sport for all abilities and a great way to get outside and be physical, but still have enough time to laugh and enjoy each others company, as well. The course is set up with nine targets and can be rearranged to fit any ability. Team 420 still plays frisbee golf every third Thurs. at University West’s grounds. As well, the equipment for frisbee golf is available to borrow for trusted team members.

You don’t need to be in Victoria to be a part of the Team 420 action. Mik Mann’s story is evidence of that. For the last few years he has played his regular golf game in Port Alberni wearing his Team 420 gear, and participated in many golf competitions as part of Team 420.

He says there hasn’t been any negative response to his affiliation. In fact, it allows the closet tokers at the club to feel more comfortable with him, while normalizing marijuana use. Mik says that golf and marijuana go together naturally. “The point of the game is to get on the green,” he says.

Mik’s Team 420 activities don’t end there. He also flies r/c planes and helicopters sporting Team 420 stickers, and takes part in geocaching as a Team 420 member. Geocaching is a relatively new sport played by people throughout the world using GPS devices to track down hidden caches—much like a treasure hunt. The caches are usually in a waterproof container and consist of small inexpensive items like buttons, trinkets, coins, or small toys. Sometimes a cache also has a “hitchhiker” which is often a geocoin or another object that geocachers move from cache to cache, and keep track of its progress online. According to Wikipedia there are over 1.3 million active geocaches in the world, in over 300 countries. 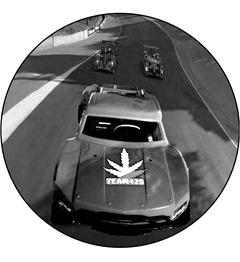 Geocaching is an excellent way to get outside, and enjoy the community and countryside you live in. It doesn’t require any special ability to take part—kids, as well as adults can take part in the fun. It has a wide appeal making it inclusive for anyone in the community that wants to join in.

Team 420 gear is available at the Sacred Herb, in Victoria, and will soon be available online. You don’t need to buy the gear to wear the logo. The team also encourages people to make their own Team 420 shirts using permanent markers, or fabric paints. You can also make your own Team 420 signs, hats, or shorts—the possibilities are endless.

No matter what sport you do, or where you do it, you can incorporate the concept of Team 420 into your activities. Like Mik, you can enter golf tournaments, or other community competitions as part of Team 420 and wear the gear, and open the door to conversations about marijuana use and its benefits. From snowboarding to roller derby, marathon running to golf, if you toke and play, wear the team logo proudly and help smash the propaganda about the listless and lazy cannabis consumer. 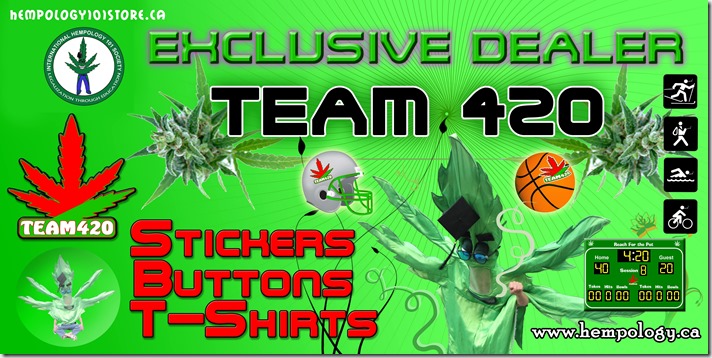 By Calli Walton Cannabis has grown and evolved alongside humans for thousands of years. Evidence has come forward that our relationship with the Cannabis plant dates back to (and may have even been a cause of) the neo-lithic revolution at the end of the last ice age. It comes from the Earth and provides us […]

Joints To The World