Our laws are founded on principles which must be honoured by Parliament, otherwise they will be seen as illegitimate by most of the public. The British philosopher John Stuart Mill (1806-1873), argued in On Liberty ((1859) 2012) “that the only purpose for which power can be rightfully exercised over any member of a civilized community, against his will, is to prevent harm to others. His own good, either physical or moral, is not a sufficient warrant.”

The government cannot defend its laws against marijuana by claiming that it harms others because there is no evidence to support such a claim. The problems associated with marijuana are created by the demand for a black market product. Drive-by shootings, “grow-rips”, grow-ops with children present, and a host of other evils are the direct result of illegitimate, racist laws.

Health Canada defends cannabis laws on the basis of harms which may occur to heavy smokers of the plant. This group is a small minority of users and the harms are not consistent or certain. Using the results from longitudinal studies which track children from birth to adulthood, Hall’s (2015) review of cannabis research concludes that with acute or severe use a) “cannabis does not produce fatal overdoses as do opioids; b) there is a doubling of the risk of car crashes if cannabis users drive while intoxicated. This risk increases substantially if users also consume intoxicating doses of alcohol; c) maternal cannabis use during pregnancy modestly reduces birth weight” (p. 30; italics added). There are harms associated with marijuana for some people, but nothing which cannot be regulated much like we do with tobacco and alcohol (and with varying degrees of success, as argued below).

Hall (2015) concludes that “regular cannabis users can develop a dependence syndrome, the risks of which are around 1 in 10 of all cannabis users and 1 in 6 among those who start in adolescence” (emphasis added). This same group “double[s] their risks of experiencing psychotic symptoms and disorders, especially if they have a personal or family history of psychotic disorders, and if they initiate cannabis use in their mid-teens”. To repeat, this is a group of regular or chronic users who are more likely to experience these effects. It does not apply to occasional or recreational users but the law, however, punishes them equally. 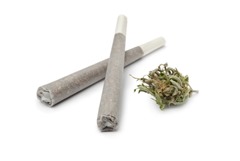 Hall (2015) also finds that “regular adolescent cannabis users have lower educational attainment than  non-using peers” (p. 30), largely because of a lower IQ – about 8 points below the mean, or one-half of a standard deviation below their peers (p. 24). Important qualifications are made about this finding::

“[T]hese effects on IQ were found only in the small proportion of cannabis users who initiated in adolescence and persisted in daily use throughout their 20s and into their 30s. No effects were found in those who initiated later or in daily users who ceased use earlier in adulthood” (Hall, 2015, p. 24 emphasis added).”

That cannabis may be harmful to members of vulnerable groups is an argument for its regulation, not criminalization. Our present laws create the market conditions where dosage and quality are unknown; marijuana must be purchased in a black market run by criminal organizations. There is a growing body of research which shows that increased drug law enforcement is associated with higher rates of gun violence and higher homicide rates in Canada (British Columbia Centre for Health Excellence, 2010; Kerr, Small, & Wood, 2005; Stop the Violence BC Coalition, 2011; Werb et al., 2011).