You’ve probably seen it before but if you haven’t, go and visit liftcannabis.ca, the Lift website developed in 2013, by Tyler Sookochoff, former director of marketing for a firm that produces cannabis harvesting equipment.  Lift has two regular employees: Sookochoff, and communications director, David Brown, my interviewee for this week.  The site features a blog, and thus a few bloggers.  The writers include, besides Brown, Cannabis Digest blogger Owen Smith, and Jenna Valleriani.   Lift is independent: it is neither a political affiliate nor an extension of any other organization.  It is financially independent.  It is not monetized.  It features no ads.  It has no regular donors.  It is nobody’s baby.  On the other hand its goal is to help bring together the disparate elements of a Canadian medical marijuana community, some of which are not on speaking terms with others.  It features links to Health Canada’s licensed producers (LPs), for example, but wishes as well to serve members of Canada’s medical marijuana dispensaries, and medicinal home growers.  Although independent, thus, it is complexly constrained.

David Brown’s ideal is benign neutrality.  He would like Lift to present medical marijuana as an emerging industry neither to be promoted nor opposed, but rather to be perceived as a fact.  He would like the site to be an unbiased new source, and an important hub for the Canadian market.  To this end, Lift links visitors to the 16 producers currently licensed under the MMPR.  It provides an introduction to obtaining legal access to medical marijuana in Canada.  It also links visitors to medical cannabis dispensaries across Canada; to clinics that introduce patients to sympathetic doctors; to information on the latest cannabis strains; to the medical uses of cannabis; to sites for cannabis accessories, vapourizers for example; and to the blogs.  Some blogs provide information on Health Canada’s rules, viewed in a charitable light; others are fiercely supportive of the upcoming court cases to secure rights for home growers, and for makers of cannabis extracts, currently illegal.  The aggregation of such views, or at least the act of placing them side by side within the confines, understood loosely, of what is legal, appears to be Lift’s take on neutrality.

Brown and Sookochoff would like Lift to be a place for anyone wanting to join the conversation about cannabis.  They would like to see more active participants, and to invite more writers.  They publish regular patient reviews of LPs, and of strains.  The reviews themselves are charming hybrids, straddling cannabis medicine and cannabis culture and spirituality.  They describe strain effectiveness for particular ailments, but rhapsodize as well on the beauty of the buds and trichomes—“very pretty bright green with a few hints of purple.”  They detail with enthusiasm the qualities of high, stone, or ‘bake’ that favourite strains produce.  One review writer provides a Youtube link to cannabis infused buttermaking, as well as to some recipes.  At the patient review level medical, recreational and legal boundaries are crossed liberally, with nary a hint of meta-commentary, self-analysis, or angst.  Very refreshing.

In 2014, Lift hosted the first Canadian Awards, under several categories, for the best strains.  It also handed announced awards for the best LP, dispensary, clinic, blog and head shop.  The site hosted, in addition, a competition for the best Canadian Cannabis Crusader.  Its selection for that year, based on member votes, was BC lawyer, John Conroy, who has been leading the coalition to fight for patients’ rights to grow their own medicines.  I must confess I’m not wild about the Christian implications of ‘crusade,’ with its imagery of holy wars and swords on horseback, but one has to applaud Lift’s basic intention.  Then again, I was raised on Crusader Rabbit, and if that’s what Brown and Sookochoff had in mind, I withdraw the critique.

I asked David Brown how, in his view, the social media stand in relation to their mainstream counterparts.  Does he see the latter as constitutionally hollow, doomed forever to repeat RCMP generated stats?  Nope.  Brown lacks the gene for curmudgeonly assessments.   Either that or he’s cultivating the practice of Zen impartiality, an outlook for which I admit I have little aptitude.  He’s been sending emails to journalists for a while now, offering variations on:  I saw your article, and here’s what you really need to know.  He’s sympathetic; the subject of cannabis lends itself to being misrepresented, and journalists seem to know very little.  These days, he is called occasionally for an opinion.  He admits though, to being disappointed.  To date, his input remains unacknowledged.  I think he should start charging by the word.

I’m grateful to this interview for inducing a moment of awareness—in me, that is.  We had only a brief discussion on LP response to the patient revolt against the MMPR.  But it was enough to shift my perspective.  I suspect now that, however Health Canada sold its program, clever business people never counted home growers, or those with scant financial resources, as future clients.  Why would they?  What they saw, and what they probably have, is a different market, one comprised of newcomers with means, looking for a strictly legal approach to medical cannabis, with no desire to explore or join a counterculture.  I was reminded of Victoria, BC doctors Hepburn and Sealy’s comments on similar attitudes among the majority of Canadian doctors.  They’re the big conventional minority, now knocking on a door designed especially for them.   Based on comments posted on the site, many of its members are happy with the new services.  But patient gardens legal or otherwise, pose no threat to emerging cannabis businesses.  They never have. 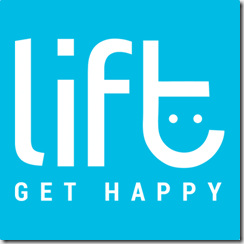 On the whole, Lift is remarkable in its practice of encompassing contradictions.  Its creators speak the language of business:  emerging markets, affiliates, stakeholders, niches.  But the site as a whole remains friendly to the non-business oriented concerns of home growers, and to the open sharing of information.  It appears supportive to ‘high security,’ expensive production methods, but Brown says he is still sympathetic to the view:  It’s a plant.   Whether he holds these thoughts simultaneously or sequentially he didn’t say.  Either way, it seems a useful skill, applicable to the future of cannabis politics nearly everywhere.  Or maybe not.  If he writes a blog on how to acquire it I’ll post it to my Facebook page.

There are issues, however, over which I must part company with Lift’s approach.  Its designers want info neutrality, but for my comfort level there are far too many elephants amongst the links.  You can cruise the site all day without once colliding solidly with the war on drugs—with its existence.  There is nowhere to find out when and how it started, and what it’s done to people; nowhere to learn how much collective grief it has taken to make the current medical marijuana market possible—how many Canadians and others have endured prosecution, jail time, loss of their children, loss of their health, and loss of their resources.  Surely this absence is correctible.  There can be no public education, properly so called, without it.

Currently Lift does not invite us to think deeply about which adults, if any, should hold authority over others, on the matter of what substances they can choose to ingest.  Are we allowing ourselves to be governed by federal governments whose leaders feign god-like immunity from legal challenge on herbal medicines?   Should non-lethal plants ever have come under the control of departments of health?  When did this control start?  With the Canadian Food and Drug Act of 1920?  With international conventions?  With changes to how doctors have been educated?  With changes in the pharmaceutical industry?  Have we been trading our autonomy for false claims that such a trade protects us?  These are matters that need discussing, if only because understanding them is essential to maintaining a free market.  There used to be a free market in cannabis medicines in Canada.  Look how easily it was lost.

The Lift folks plan to host a public panel and debate on medical cannabis, or perhaps just on cannabis, in Vancouver BC this spring, and a larger conference on the subject next fall.  I hope to attend both.  I would like these events to offer more hard-hitting critique than one finds on Lift, and not just because my personal sensibility is suited to it.  In politics some information pruning is inevitable, and some maybe even be temporarily desireable.  But for these upcoming events it would be nice to see a few more elephants rendered visible.