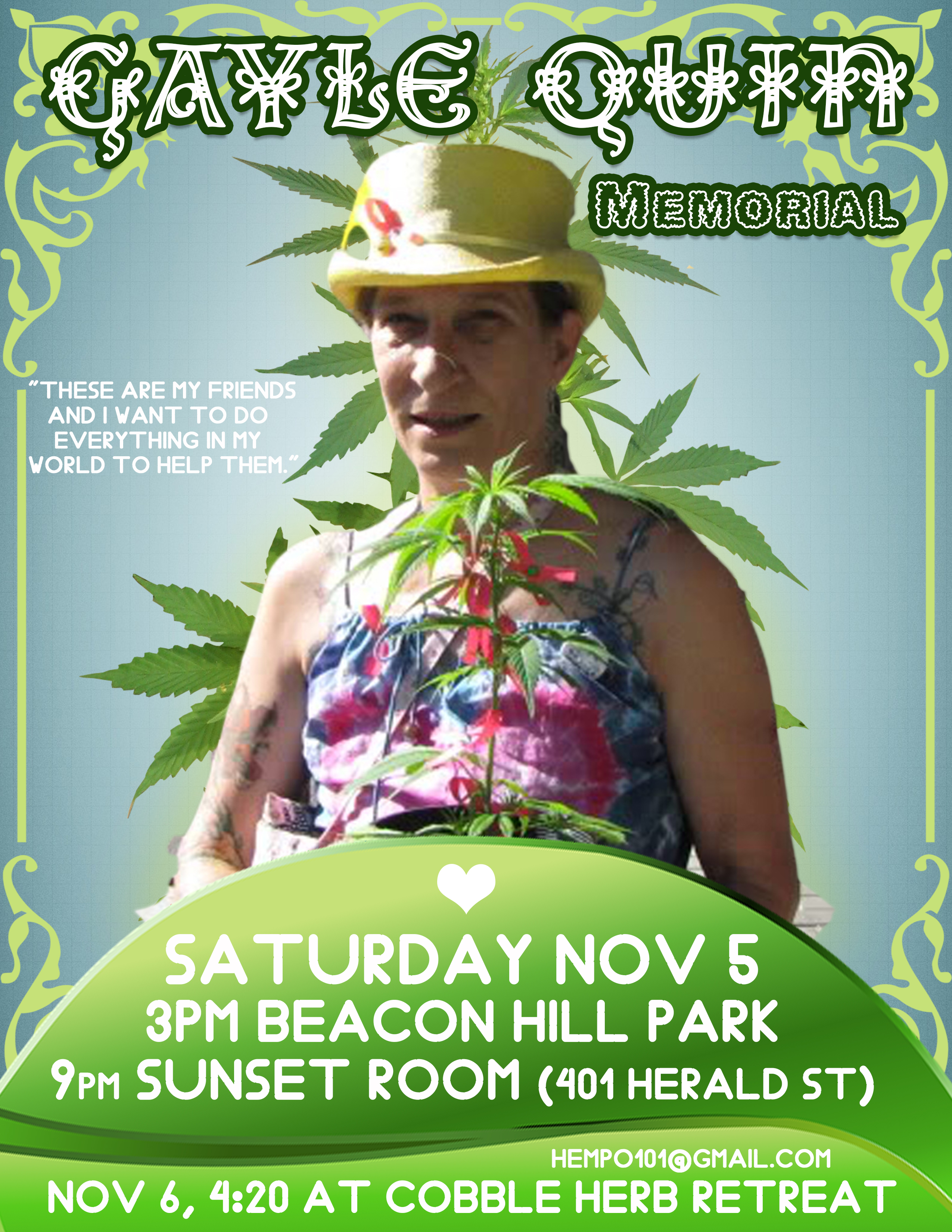 Gayle’s laughter thundered with brilliant rays of light that warmed my heart and soul. I first met her at UVic Hempology in 2004.  I reluctantly showed her a cannabis roach that I’d preserved in wax, thinking it was a weird thing to have done.  Gayle enjoyed it so much that she kept it and made a necklace out of it.  She reminded me about it when I had forgotten about it years later.

In Beacon Hill Park I saw her pick up feathers from off the ground and place them in trees, giving them another chance to catch the wind.  Gayle often offered words of encouragement but she never seemed afraid to speak her mind.  She was unshakably strong and believed in herself.

It became my honor to work with Gayle at the Cannabis Buyers Club, the bakery and Hempology.  We discussed different types of illnesses, treatments, medicines, and brainstormed new products for our patients. 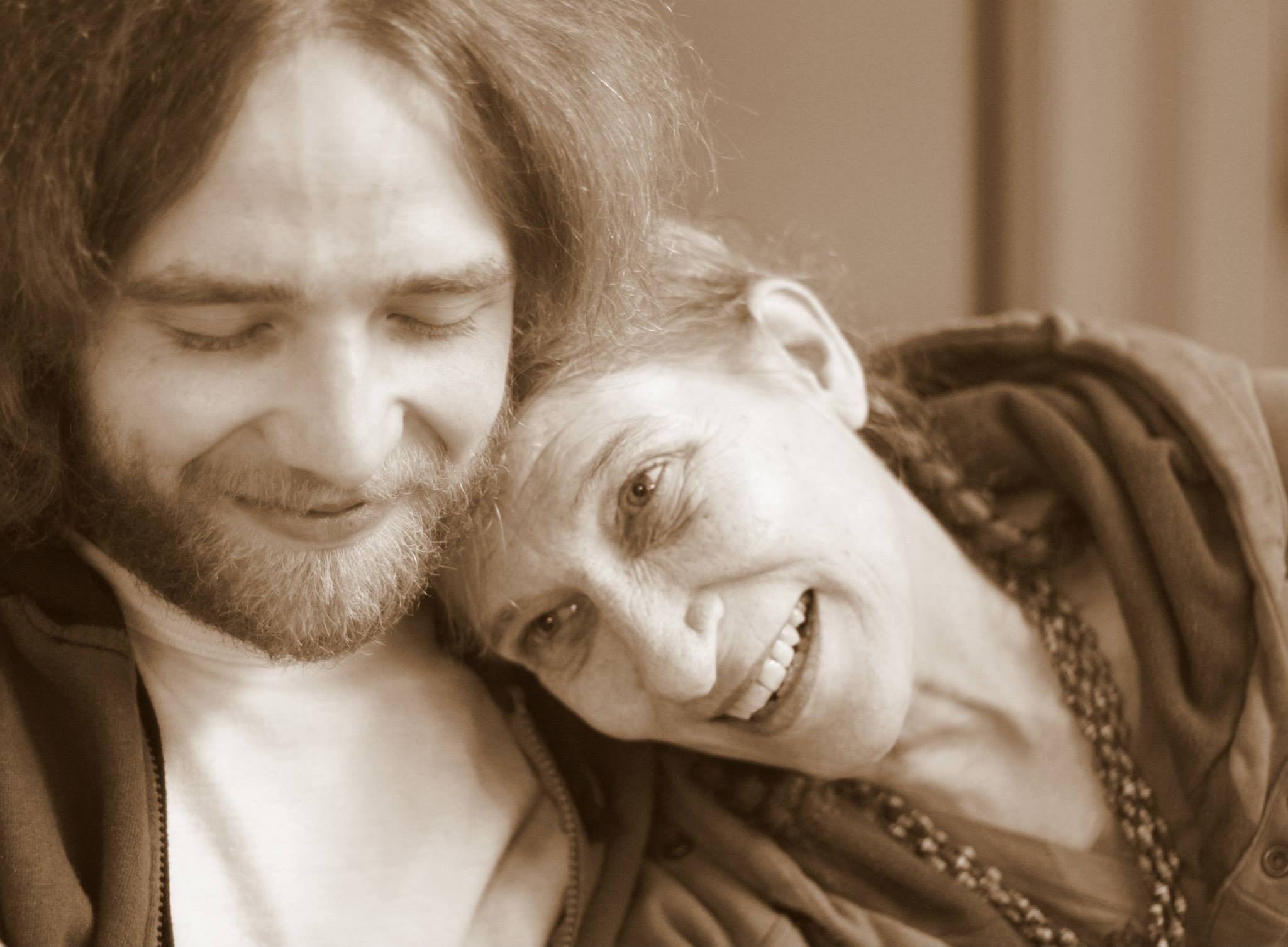 Even when she wasn’t feeling well, Gayle tried her best to solve the problems she came across.   She had a great passion to help people and a strong sense of justice that inspired those around her.  Gayle helped me to have more faith in myself, and others. I am eternally grateful for knowing her and forever inspired by the legendary Gayle Quin.

Gayle was a woman of many roles, but to me she was a friend when I really needed one. When I moved to Victoria I started to suffer from an unknown aliment that I could not get under control. I was too embarrassed to share this struggle, but I did confide in Gayle. She did many things to assist me, including creating homemade antibiotics, and a diet plan, and giving many beautiful skirts from her personal collection. But what really stuck with me is that she kept it a secret, not even sharing my problem with her lover, Ted. The trust she created was unbreakable. I am going to miss our adventures in nature; I always learned so much just walking and talking with her. I am going to miss thrift store shopping with her; she always had the best eye for the coolest stuff. Mostly I am going to miss just sitting with her in the cabin and feeling loved, accepted and at home. Words could never capture how much I loved her and how much I miss her already. I know you’re all around us Gayle, but at the moment that just isn’t enough. 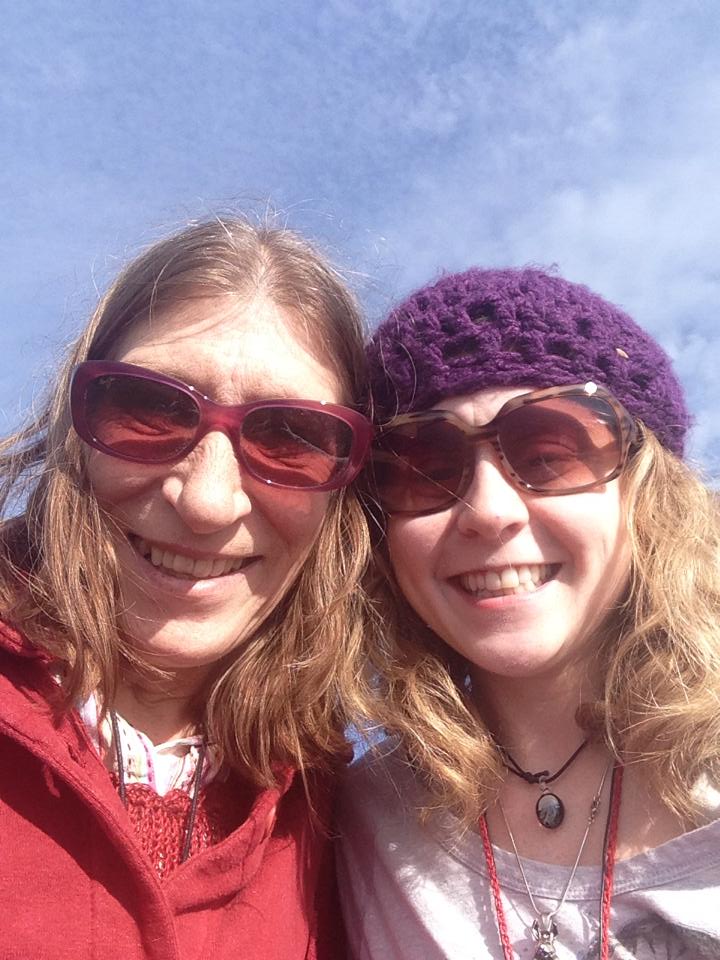 In 2011 I was taking an entry-level English course, and was asked to write about a strong women who inspired me. I chose to write about Gayle. She had a big impact on me immediately, and my respect and love only grew for her over the years. I wrote this before Gayle was diagnosed with any kind of cancer, before she had to show everyone how strong she really was. But I still feel it captures what shone through even in the toughest of times.

“My friend Gayle is a woman filled with life experience, knowledge and love. She was my boss when I was working at the Cannabis Buyers Club of Canada. Throughout the time we spent together our relationship was marked by close friendship. Gayle is truly a unique individual that expresses herself assertively, and encourages others to do the same. Her nurturing nature makes her the second mom of anyone’s dreams. Having Gayle in my life has inspired me to become a more comfortable and better person. Gayle is a very secure, confident and rare woman that expresses herself very clearly. She does this in a variety of ways, whether through a wacky outfit or a stern facial expression. Her aura demands immediate respect, but yet she remains approachable and warm-hearted. Upon meeting Gayle I realized I could be eccentric and still gain respect from those around me. This realization has allowed me to come out of my shell, and truly embrace my style.

There was a strong sense of family at The Club, which was a relief to me because I was so far away from home. Everyone had a role, but I believe that Gayle was the keystone to the dynamic. She was the person that everyone went to for advice whether it was medicinal or emotional. If something went wrong she always knew the solution, or at least had a good opinion on what should be done. Her mothering attitude made me feel like a part of the group and allowed me to grow as an individual. Having Gayle in my life has allowed me to share in some of her great knowledge, feel some of her love, and be entertained by her stories. Her erratic style and self-assurance has rubbed off on me and allowed me to enjoy life from a new perspective. The family created by her made me comfortable in an unfamiliar place. My life is enriched by Gayle’s inspirational qualities.”

Gayle Quin had a true Witches cackle. Truest I’ve heard. There needed to be someone crazy and compassionate enough to meet Ted at the front of the pack, Gayle went beyond that, transforming his good work into something great. Gayle’s is a story that wo made courtroom security weep into their ironed beige uniforms. She was mythically tough and dedicated to creativity.

Gayle’s love for people and knowledge of health and herbs was a blessing to witness every day at the V-CBC. She taught me how to make cannabis infusions and all manner of edible and topical products that eventually became the key to unlocking the unconstitutionality of cannabis prohibition. Gayle will be remembered with love by the countless souls she helped along their path as her influence continues to ripple out across the earth.

If you have people in your life like this, you should be very grateful, let them know.

I had heard about Ted Smith and Gayle Quinn long before I met them. They were the symbol of cannabis as medicine, stronger in union, united at heart and an example of how to love your life and live your love. They lived in service, to others and to each other.

I finally got the chance to meet them during our first Canadian activist retreat, held at our Pure Garden Resort in Negril, Jamaica. We wanted to assemble what we believed were the most prominent cannabis activists in Canada, and Ted and Gayle were at the top the list. They arrived late, as they were attending to certain matters at home, but the smiles on their faces made us instant friends.

Frolic is the first word that comes to mind when I remember observing this loving union. I was struggling with my own losses, expired relationships that had me traversing shadows, half awake. Watching them healed my heart and replaced my sorrow with a hope, a belief that love can happen, that I was witnessing the ideal balance between a man and a woman.

I wanted to visit Ted and Gayle many times during the last few years, to tell them what they mean to me, but finances and challenges made that impossible. I wanted to pay tribute, to tell them how their love touches others, how it taught me to be better. While I never got the chance, I know it didn’t matter because we are kindred, we are brothers and I knew they felt it all the way.

I will never forget Ted’s devotion during the most trying of times. If only we were all so beautiful.

To my hero, my best friend, my mentor. Let me start by saying: Gayle was a real living angel; she loved everyone. Gayle was also the first person that would come to your aid. Once you were in her tribe she held you close, and wouldn’t let anyone hurt you.

Gayle saved my life. I was a single mom with a very sick little boy, and I didn’t have many friends or resources. Gayle changed that fast. Gayle gave me purpose by letting me learn how to make natural medicine and how to treat myself naturally.

Gayle introduced me to the cannaworld and a cannafamily. She taught me how to be a strong activist, and how to stick up for what you believe in.

She taught me what love is really about. The love in her eyes for Ted, that was something I’ve never seen before, ever. She loved him with all her heart and soul. That woman did not have a jealous bone in her body. The love she had for life was inspiring, and just being around her made me happy.

I will never be the same without her in my life, but Gayle, I carry your strength and will keep my promise to you to always help patients. I will continue to give out joints in your honour, and share your story and legacy. I love you, and am so relieved you are free of pain. Fly with the eagles. I will be up there with you soon. Forever a soldier, RIP, medicine woman. 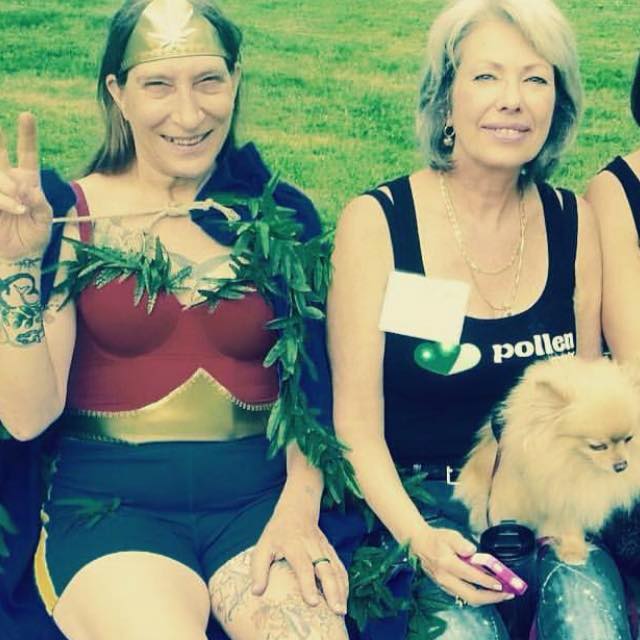 My friend, my sister, she was magical to me. I miss her boundless love, her enveloping loving kindness, her hugs and squeezes, her laughter and many smiles, her incredible enthusiasm….I will always treasure memories of the time we had together.

I am blessed to have been able to call Gayle a friend, mentor, and soul sister. I remember the first time I met her during my first week at UVIC. She was such a fiery, lovely ball of energy in a beautiful hat she had made. Gayle was so devoted to the legalization of cannabis, and she inspired me to learn a much as I could about the plight of this sacred plant. Over the years Gayle and I worked together, played together, traveled together and even went to school together. No matter where we went her kindness, wisdom, and demeanor commanded respect and intrigue. At school she was the teacher’s pet, and often requested to add her knowledge to the daily lesson. At work she was the real boss, the person who would instinctually know if you needed a hug or a straightening out. 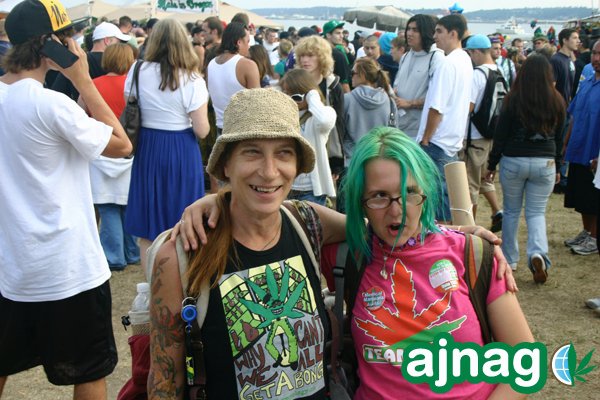 I will never forget checking into a hostel in Seattle for Hempfest with Gayle. Immediately after the paperwork was done, we were escorted to the employee ‘Smoking Lounge’ so that we would have a comfortable place to medicate and play pinball. By the end of the evening we were hanging out with cannabis legend Jack Herer, laughing and telling stories late into the evening. Gayle made friends everywhere she went. Her fierce determination made her able to do anything, and her eagerness to teach others made her a natural leader. She was encyclopedic in her knowledge of plants, self-healing, and how to make anything out of a piece of cloth and a bit of hemp twine. Throughout her illness her resolve, shining spirit and deep concern for others never faded. She was an amazing woman, activist and friend and she is deeply missed. 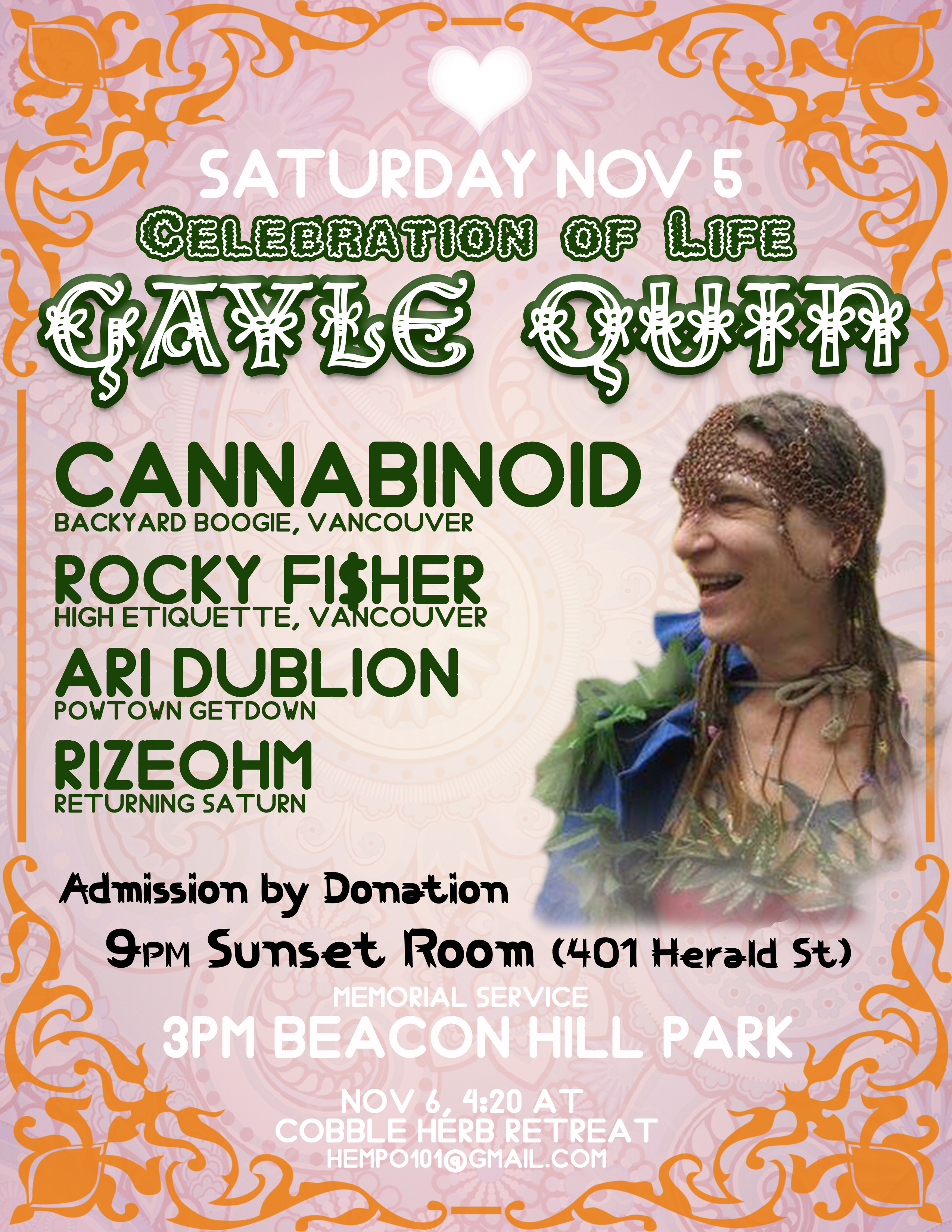