Many excited for return of cannabis powerhouse

It has been three years since Marc Emery arrived in the U.S. to begin serving a five-year sentence in maximum security prison. We are all aware that he was convicted of selling seeds, and that this is what, under U.S. federal law, warranted his harsh punishment. But according to documents released by the DEA, their main concern in prosecuting Marc was not stemming his seed sales: They wanted to put an end to his activism. They were frightened more of the social implications of Marc’s work than they were of the seeds he was sending south of the border. But you can’t put someone in jail for speaking out.

The DEA document goes into some detail about all Marc’s “organizations (including CC) [contributing] over $2 million toward court battles, ballot initiatives, jailed individuals, rallies, conferences, marches and elections—all involving cannabis or the drug war” continuing, “There is virtually no drug reform group or organization in North America that has not received some assistance from [Marc’s organizations].” The document’s opening statement smugly concludes that “Drug legalization lobbyists now have one less pot of money to rely on.” 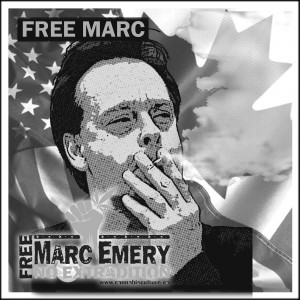 What we have here is a classic Darth Vader/Obi-Wan Kenobi situation. While Marc has been banished to another world, the work he did that frightened the evil empire into sending him away has blossomed in ways that have surely caused more than a few facepalms at the DEA HQ. This is not to say that the movement has benefited from Marc’s incarceration—he is not a martyr—but he was blessed to be surrounded by some truly incredible people who have not missed a step during his unfortunate absence.

Jody Emery moved from the Kootenay Mountains to Vancouver in 2004 to contribute her talent and energy to the bustling scene at Cannabis Culture HQ. She co-edited CC magazine with Marc from 2005 until it went online-only in 2009, and she manages the publication to this day. In fact, she manages everything at Cannabis Culture, overseeing 20 employees. What’s more, she is a natural spokeswoman, and has put more than a few news pundits in their place on national television. Her strength as a media personality quickly became clear to the political community, and in 2009, the BC Green Party approached her about representing them in Vancouver-Fraserview for the provincial election, where she received nearly five percent of the vote. She will be representing them again in the upcoming 2014 provincial election. A force to be reckoned with, she is as at home in the world of provincial politics as she is in the world of pot politics.

And then there’s “superhero activist” Dana Larsen, who worked with Marc as editor of CC magazine from 1994-2004. You’re familiar with Dana’s Sensible BC campaign (there has been and will continue to be much about this in Cannabis Digest). Dana’s also an accomplished entrepreneur who has opened or helped to open three medical cannabis dispensaries throughout Vancouver and the Lower Mainland, as well as co-founding the Vancouver Seed Bank. Like Jody, Dana balances media presence and business savvy with political promise. Dana was a founding member of both the BC Marijuana Party and the Marijuana Party of Canada, and in 2008 represented the federal NDP for West Vancouver—Sunshine Coast—Sea—to—Sky Country. Then in 2011 he made a solid bid for leadership of the provincial NDP.

Jody and Dana both represent the triple threat of personality, business acumen, and political influence. Whatever has been accomplished in jailing Marc Emery has been nullified by the accomplishments of these two, as their presence has grown to fill the void left by the near-total absence of the Prince these past few years.

I say near-total because, though he manages to get a prison blog published on <cannabisculture.com> about once a month, his efforts to stay in touch with the CC community have twice resulted in his being placed into solitary confinement. The first time was over a recording that was made of him talking from a phone in 2010 that Jody played on <Pot.tv> He got 21 days in solitary over what officials called a “misunderstanding” of the rules surrounding his phone privileges, where it was never shown that any rule had actually been violated. The second time was just this summer, when he and his prison bandmates got into trouble over a photo of the band that appeared on <cannabisculture.com> You can read more about these events on Marc’s prison blog. It is clear in both cases that no rules were broken, so it seems that someone higher up has a problem with Marc’s continued presence in the media, which is just what is indicated by the DEA document I cited earlier.

And rightly so. Imagine what will be possible when Marc is finally free and back in Vancouver, working side by side with colleagues who have grown and prospered in the time he has been away. Because of the efforts of people like Jody and Dana, Marc’s return will be to a world that is more ready to receive his message than the world he was exiled from in 2010.

Marc goes into some detail in a recent blog post about when he is likely to be released from prison. He writes that he should be released between May and Oct. of next year. It depends on when he is transferred back to the Canadian penal system. The U.S. has already approved the transfer, but at the time of writing, the application is still awaiting revue by the Canadian Minister of Justice, with an Oct. sixth deadline (There is an ongoing campaign to petition the ministry to approve the transfer ASAP; you can find out more about this as it develops at <www.freemarc.ca>). A recent article in The Province speculates that the Conservatives might be stalling here precisely because they are terrified of what it will mean to have this powerhouse of sensibility back home, what with the successes of recent anti-prohibition initiatives, despite his being made an example of. But at the moment it seems like stalling is all they can do. Marc will be free and back making waves with his family and friends sometime next year.

Marc has been a pillar of the cannabis community for over two decades. He has been to jail at least 16 times through this career. Unfortunately, it comes with the territory. But what he is going through now, and what he will have to go through yet to get home, can’t be taken lightly. Next year, when he’s out and working his magic across the street from Victory Square in Vancouver, take care not to forget what he’s been through—four years of various grades of hell, from lockdowns to solitary confinement. And of course being away from the people he loves. And remember too that Jody took every chance she got to fly down to Mississippi for rare visits when they were allowed, travelling for days to spend a few short hours chatting.

In light of the inevitability of legalization, in light of all the progress that has been made since Marc was taken away, his incarceration becomes an ironic symbol of the true cost of a prohibition that is well on its way out of popular fashion—a symbol that stands for the countless lives that have been needlessly damaged or ruined because of a pointless drug war.