Deprecated: The $control_id argument is deprecated since version 3.5.0! in /home/oq5ayjaeetjt/public_html/wp-content/plugins/elementor/modules/dev-tools/deprecation.php on line 304
 Online Programs for Cannabis Dispensers
Skip to content 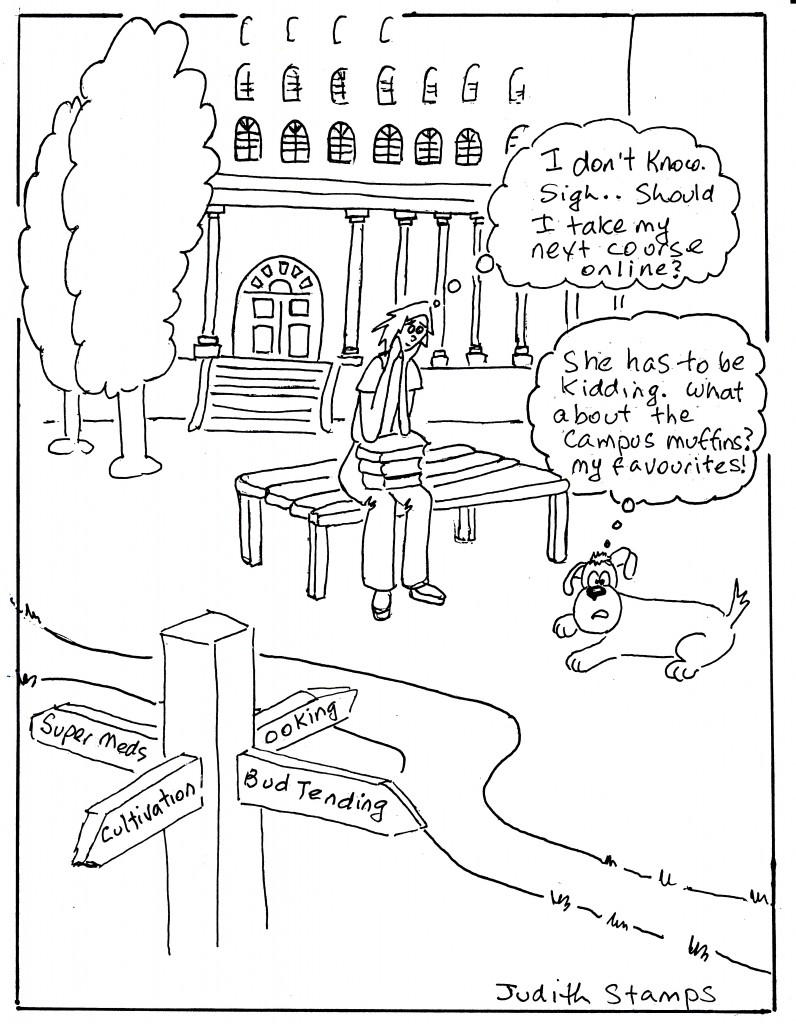 This article was inspired by an interview with the manager of Ocean Grown, one of Victoria’s younger medical marijuana dispensaries. I was intrigued to hear that she had gotten her training from an online certificate program with Cannabis Training University (CTU), completed intensively over two days.1 The interview was enjoyable, but the CTU portion of it left me in a state of disgruntled disbelief. Two days? I had spent an eon in graduate school. I cheered myself a little by making up silly phrases: educational fast food, learning lite, dispensing 123. Readers can invent a few. I meant to file this information, but really couldn’t stop thinking about it. As I soon came to discover, Thinking Is Subversive.

A few weeks after the interview I had a change of heart. Schools like CTU made sense. Legalized medical marijuana is new, people will be opening dispensaries, and they need basic training. Then I had a radical turn. For the movement, public education is crucial. Any attempt at it has to have some value. Besides, why prejudge? Who knows how many days a course should take? Thus altered, I went online to check out CTU and similar schools. Truly, I have been out of the loop. There is a minor galaxy out there of online certification programs, many given by ‘entities’ calling themselves universities, colleges, or institutes.2 Keen to end my ignorance, I set out to sample them. I took courses from three schools: CTU (Ocean Grown’s choice), Cannabis Hemp Academy3, and Cannabis Training Institute.4 Doing entire programs was not practical, so I chose the schools’ courses on marijuana as medicine. The topic interested me, and I knew at least something about it. I could not have assessed courses on dispensary finance, for example. Each course is about an hour and a half long. Here is what I have to say about them.

Of the three schools, CTU is the most commercial. When you visit the site you are met by a looped, music-backed sales talk that will not go away until find a course on which to click. A six-course program costs $99.99, $199.99 if you purchase the MB2 Botanical Extractor. The host for this course is Arif Khan, director of Greenway Medical Marijuana Physicians. There is a back beat and drifty music throughout the entire presentation. Musical wallpaper is a new thing in e-education. I looked it up. The program features a number of speakers, not all identified. There are testimonials. The juxtaposition of music, images and testimonials is uncomfortably like the infomercials popular on late night TV. We hear requests for funding from Patients Out Of Time, and the California Pacific Medical Center Research Institute, and are invited to buy Irving Rosenfeld’s book, My Medicine.5 Still, the program is reasonably informative, and I was pleased to see Dr. David Allen there. He discussed America’s medical marijuana plantation in Oxford, Mississippi and the IND program under which, between 1976 and 1992, thirty five patients in the US, including Rosenfeld, cited above, received federally rolled joints. The program is now shut down. America goes down in history, apparently, as having had the first ever federally approved medical marijuana program.6 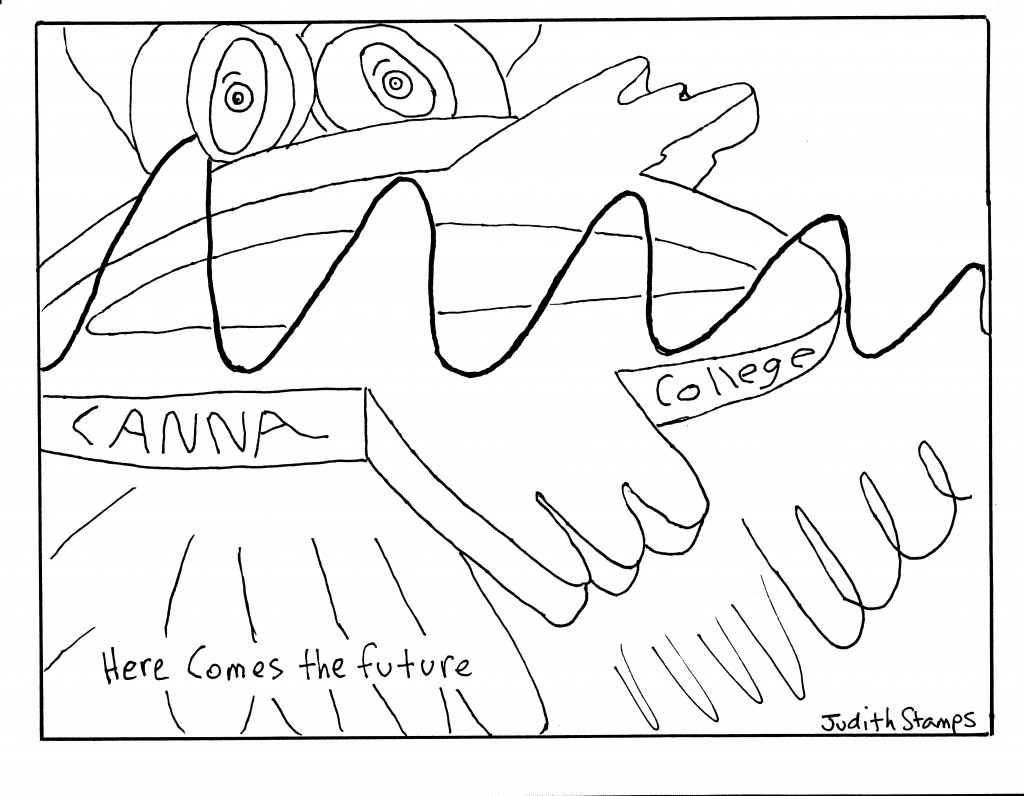 Cannabis Hemp Academy, by contrast, is noncommercial. It is also more expensive. The CHA full certificate program is priced at $420.00, a trifle cute, I think. The medical marijuana course is given by Robert J. Melamede, a well-known molecular biologist. The entire session takes place in a classroom. There are no visuals. Melamede is New-Agey. He devotes much class time to discussing entropy, thermo-dynamics and equilibrium. We learn that molecules act creatively and co-operate. We learn about Behousov-Zhabotinsky reactions.7 We learn that biochemical feedback systems are magical, that equilibrium equals death, and that it’s all about flow. Okay. I’m all for the universe, especially without canned music and ads. Otherwise I am left wondering how this information would manifest in dispensaries run by Melamede trainees.

But Melamede makes observations that resonate, at least with me. A hundred years ago, he noted, we died of infectious diseases. We now have age related ones like inflammation, neurological ailments, cancers, and osteoporosis. Endo-cannabinoids reduce stress and inflammation, but from an evolutionary point of view, have not kept up with our new conditions. So external cannabis is crucial. For our time and place, it is nothing less than an essential nutrient. This is an impressive idea. Except that several hours later, it occurred to me that maybe pharmaceuticals have done such a good job extending our lives, we now need cannabis to cope. Huh. This all bears rethinking. Meanwhile, I have adopted the idea that cannabis is an essential nutrient, and plan to repeat it often.

Melamede is an enjoyable and inspirational speaker. But he could do more to impart his knowledge to students. He announces at the outset that he will arm his listeners by introducing them to thousands of peer-reviewed studies. He gestures meaningfully, I think, toward a MacBook Laptop, sitting on a table beside him. But we hear neither the mention of a specific study, nor the name of a researcher. Rather, students are referred to Cannabis Science Inc. (CSI), a research institute of which Melamede is CEO.8 By my standard, that’s tacky. I checked out the site, and wandered for a while through its maze: mission statement, investors, corporate structure and so on. If it offers a portal to thousands of research articles I didn’t see it.

Then there is the Cannabis Training Institute. Its full program costs $155.00, $255.00 if you plan to take the online test for certification. The medical marijuana course is $58.00. It is also one of the better $58.00 I have ever spent. CTI is run in collaboration with Americans for Safe Access (ASA). ASA is a grass roots movement, dating from 2002, developed in response to DEA raids on California dispensaries carried out in the 1990s. CTI teaches raid preparedness courses. From the outset, thus, its mission is social and political.

CTI has put serious thought into the art of online teaching. The program combines expert speakers, always identified, helpful, sometimes animated diagrams, and frequent quizzes. Long lists of facts absorbed in short order are inherently confusing, so the quizzes are helpful. Through taking them I was better able to distinguish the course’s minor details from its major points. Students get a score for each quiz. This may sound trivial, but rewards do a fine job keeping a learner’s attention. What can beat this? “Your accuracy was 86%.” Yay! As ASA’s broader mission is public education, CTI begins by telling students that there are 15, 000 peer reviewed cannabis studies out there, over 2,000 on the endocannabinoid system. Students are referred to Donald Abram’s research9 and to a comprehensive collection of cannabis studies, O’Shaughnessy’s Online.10 They are also invited to check out the abstracts in PubMed. I should add that this site contains much anti-cannabis research; you need to know what you are looking for.

The segment on the endocannabinoid system is good, especially as an introduction. CTI calls the ECS the “human body’s silent balancing act.” The program adds to our historical understanding of ECS research. I learned, for example, that in 1973 medical researchers discovered opioid receptors. Two years later in 1975, they found endo-opioids, the substances we now know as endorphins. This pattern of discovery set the research path for cannabis. The years 1988 and 1992 saw the discovery cannabinoid receptors, CB1 and CB2, respectively. Based on the experience with opioids, scientists then searched for an endogenous compound, something the body makes that matches its receptors. The year 1996 brought news of anandamide, one of body’s own cannabinoids. Much of this work was carried out at The Hebrew University of Jerusalem by renowned researcher, Raphael Mechoulam. These discoveries, according to CTI, marked a turning point for cannabis politics. Following these historical points, CTI students are introduced to the basic chemistry of cannabinoids and their receptors, and taken through a detailed description of how cannabis interrupts and halts chronic pain. All in all, for online education, it is very good.

Check out the link to cannabis schools provided in the second endnote, and you will see that the term ‘university’ is tossed about very loosely these days. Listed therein are real estate agents to help you find a good location, agencies to help you purchase marijuana collectives (I hadn’t realized they were for sale), lawyers’ offices, and sites no longer active. One has to ask, though: Is all this necessary? Can you not get a comprehensive start without online schools? I would say decidedly, yes, if you know what questions to ask. Traditionally, training has been self styled, informal and apprenticeship based. Things have changed. Online programs purport to teach cultivation, dispensary finance, patient care, marijuana and the law and the science of cannabis. Some offer courses on cooking. For some new breeds of dispensers, this will probably be the future. Rank beginners do not know what questions to ask. They may not have access to apprenticeships. Indeed, they may know no one relevant at all.

Still, outcomes are unpredictable. Ocean Grown’s person took my least favourite program. But the dispensary has 1500 clients, apparently doing well, and the place is sincere. On the other hand, this is small, fairly friendly Victoria BC, where Ocean Grown has been able to benefit from some mentoring by VCBC, VICS, and other established groups. What will happen in more remote places, or bigger cities, is yet to be seen. In the meanwhile, have fun looking up some of this stuff. It’s scary, but entertaining. Oh. And by the way, here’s my favourite link to the ECS.11 Cheers.

Those who have known me for many years are aware that I have consistently advocated for major reforms to Canada’s drug laws. The current perception of drug users as faceless criminals needs to shift to include neighbours, co-workers, and family members.  As patients, individuals require access to cannabis for legitimate medicinal purposes and/or compassionate health […]

Ted Smith It is with deep regret that I am announcing the cancelation of the monthly debates the International Hempology 101 Society had planned on starting at the downtown library on May 12.  A number of factors have forced me to concede that I am personally stretched to my maximum and that the extra stress […]