Deprecated: The $control_id argument is deprecated since version 3.5.0! in /home/oq5ayjaeetjt/public_html/wp-content/plugins/elementor/modules/dev-tools/deprecation.php on line 304
 Plant the ‘Good Seed Hemp’ - Cannabis Digest
Skip to content 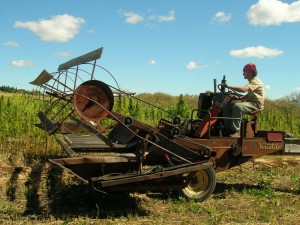 The Good Seed Hemp Company is based in Victoria BC, with roots in Saskatchewan, and has been at the forefront of growing, selling and educating people about hemp since 2006. The story of the Good Seed Hemp Company is a story of the Hunter Family, a Metis family from the countryside near Batoche, Saskatchewan. The 300-acre family farm was purchased in 1978 by Lyall and Bev Hunter, and was where they raised their three children, Alita, Blake and Shane. Over the years, the farm was host to an array of animals including cattle, pigs, chickens, turkeys, rabbits, ducks and goats. Additionally, the farm produced grains and hay. In 2000, the family temporarily moved off the farm to begin a business in California called Excel Solar Electric. The solar industry introduced the family to a number of successful business people in the world of organic wineries, farms and education centers. Through relations with these clients, the family soon began to see potential in the world of organic farming and direct marketing.

In 2005, hemp seed was introduced to the family, as it was becoming available in cutting edge health food stores. Curiously enough, all the hemp seed products were grown in their homeland of Canada. Upon furtherinvestigation, it was apparent that industrial hemp was indeed becoming a part of the agricultural landscape in places like Saskatchewan. It was at this time that Blake and Shane Hunter, aged 25 and 22 at the time, returned to the family farm near Batoche, Saskatchewan to try their hand at growing industrial hemp.

The first step was to obtain government permits from Health Canada for a licence to cultivate, store and process industrial hemp seed. Although at first the idea of an official permit sounded daunting, it turned out that the paperwork was fairly straight forward, and the officials at the Industrial Hemp Section of Health Canada were very helpful people. Permits are given for a 12 month period, and applicants are required to give GPS co-ordinates for their proposed fields, a description of what they intend to do with the seed in terms of storage and processing, and a promise to abide by a set of rules and regulations laid out by Health Canada. These are some of the main requirements:

Once they received a permit, the young Hunter men purchased a strain of seed from TerraMax Seed Company called Finola. This variety is very short (4 – 5 feet tall), and among the top yielding varieties (1000 – 2000 lbs per acre), but with the smallest seed size. The 2006 crop was planted in late May, using a 1972 John Deere 4020 and a 1948 Versatile seed drill. Very used equipment, to say the least!

Within a week, the first hemp sprouts were up, but so was a blanket of volunteer wheat and canola. Within a few more weeks it was obvious that the hemp was going to have to compete with these other plants, as weeding 10 acres by hand was out of the question. As the summer progressed, the hemp stayed a foot above the other crops, and all came to maturity by early September. 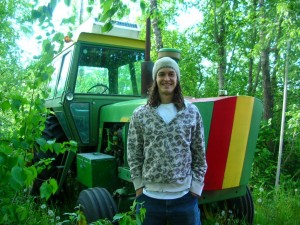 With a super tight budget, the Hunter men had to figure out where to find a seed-harvesting machine, often referred to as a ‘combine’. Fortunately, their Grandparents, John and Lois Hunter, had two old combines, both John Deere 97s, a model of harvester from the early 70s that could be pulled by a tractor. With four weeks to go before harvest, Blake and Shane headed into the forest where the John Deere 97s had been parked for two decades. One machine had a poplar tree the width of a fencepost growing through the middle of it, and neither machine was even close to field-ready. However, with daily work and lots of WD-40, the two machines were combined to make one functioning unit; it hit the field ready to go with a few days to spare. That year saw the largest yield per acre that the Good Seed farm has ever had, to this day! That first year also yielded some excellent discoveries in the world of modern hemp agriculture. The first lesson came in the form of the Bertha Army Worm, one of the only “pests” that have the potential to damage hemp. However, the moving army or green worms prefer to eat canola before they move on to hemp. As a result, the field’s volunteer canola crop was decimated, but by that time the hemp had matured past the stage where it was vulnerable. Another exciting lesson was learned in the hemp field that bordered the vegetable garden. Here, Blake decided to give a few of the plants “garden-treatment” rather than “field treatment.” These plants were spaced 2 feet apart, given water and weeded. Some were companion planted with beans. Through this experiment he discovered that, tended in this way, a single mature female plant had the potential to yield 1 – 2 pounds of raw hemp seed.

Over the years, The Good Seed farm has maintained small acreage production, all with out-dated equipment. As value-added products are an important foundation and a key to a farm’s success, it has also moved into the world of buying raw hemp seed from other farmers. Good Seed Hemp has also kept true to the idea of ethical trade and to bringing food directly from the farmer to the consumer. To achieve these goals, Good Seed purchases seed through two channels. The first is the Farmer Direct Co-op in Regina, SK. This farmer-owned Co-op is the first organization in North America to be certified Domestic Fair Trade, ensuring fair prices for small-scale farmers. The second channel is Good Seed’s direct relationship with an independent family farm called Marshall Farms from Holbein Saskatchewan. Good Seed pays Marshall Farms the exact prices set by Farmer Direct. Marshall Farms is one of the farms leading the way in large-scale regenerative farming techniques. It uses hemp as a foundational crop that returns large amounts of biomass to the topsoil each year, while also producing above average yields of protein-rich seeds. In sum, Good Seed has always stood for working with farmers to encourage hemp agriculture in North America, coupled with the vision of hemp foods becoming a staple in every North American’s pantry.

When you purchase Good Seed Hemp products, you are supporting organic agriculture and ethical trade for Canadian family farmers, while getting the highest quality, great tasting nourishment for your body. With your support, Good Seed aims to expand its farm operations to include a yearly Hemp Festival, with the goal of continuing to educate people about this wonderful crop.

For more information, check out www.goodseedhemp.com

Ted Smith While there is a great deal to celebrate, the new regulations being proposed for medical cannabis stores in Victoria, B.C. have a few serious problems.  Hopefully the members of the Victoria Cannabis Buyers Club will be able to convince the city councillors that amendments or exemptions to these regulations will help ensure this […]

Unprecedented Increase in Cannabis Dispensaries Causing Growing Pains When is something illegal? It’s a simple question with multiple answers depending upon what that “something” represents in the question.  In the case of medical marijuana, that simple question has become infinitely more complex in Canada than it used to be.  It is clear that according to […]

Be It Resolved That Cannabis Plants, Like Cats, Require Minimum Levels of Regulation, If Any: A Ramble on Regulations Judith Stamps Imagine a group of city planners and cannabis medicine specialists, designing a system for patient access. Because the oldest compassion clubs are, to date, the best available authorities on medical cannabis and community liaison, […]