Deprecated: The $control_id argument is deprecated since version 3.5.0! in /home/oq5ayjaeetjt/public_html/wp-content/plugins/elementor/modules/dev-tools/deprecation.php on line 304
 Marc Emery Returns to Canada - Cannabis Digest
Skip to content

No event in cannabis activism around the world has been as highly anticipated as the release of Marc Emery.  After spending over 4 years trapped in various US jails, the Prince of Pot is getting ready to return to his native homeland to begin the next chapter of his life.  No one could be happier than his wife, Jodie.

His sacrifice has not been wasted.  In fact, it is obvious today that his efforts helped to pave the way for the gradual legalization of cannabis across the USA.  These four years have seen incredible changes in the cannabis industry.

For those unaware, Marc sold about $14 million worth of cannabis seeds, mostly to Americans, and then used the approximately $4 million in profit to sponsor ballot initiatives, political campaigns and other forms of activism.  That was until the summer of 2005, when he was arrested in Halifax while his offices were being raided back in Vancouver.  He pleaded guilty so that charges could be dropped against his two employees that were caught up in the raid.

“I’ve been fortunate enough to visit Marc at his prison in Mississippi twice, and both times I was impressed by his amazing positivity and optimism in a potentially soul-crushing situation. He has not lost his unrelenting dedication to his principles, even after paying such a high personal price.”

As one would expect, life in US prisons has not been easy.  For a spell he was stuck in a jail that housed mostly foreigners, so he learned Spanish and started to help other inmates out with their legal problems until they moved him to another jail.  There has been time in solitary confinement.  He has had privileges taken away for no reason and has missed visits with Jodie because the prisons can get put into lockdown quickly.  A brief battle with an infection was perhaps the scariest time for his loved ones, who felt helpless as they watched him struggle from afar.

When I ask one of his top employees, Jeremiah Vandermeer, how Marc seemed to be holding up, he said, “I’ve been fortunate enough to visit Marc at his prison in Mississippi twice, and both times I was impressed by his amazing positivity and optimism in a potentially soul-crushing situation. He has not lost his unrelenting dedication to his principles, even after paying such a high personal price.”

One of the most surprising things Marc has done in jail is to learn how to play the bass guitar!  He has been playing in a few bands in jail and is really looking forward to buying a bass when he gets home so he can play at the jam nights at the BCMP.  It is a sign of how intelligent and determined the man can be.  No wonder Jodie loves him so much.

In so many ways this has been very difficult for her.  As she says, “Being apart from each other and worrying about his health and safety has been very tough. I have been trying not to get tired or depressed, because I’m managing four businesses and 27 employees, and doing media appearances and public speaking at conferences and events.  I have had to be a role model, and continue fighting as hard as possible to end prohibition so we can save other peaceful people from the harms of arrest and imprisonment. I didn’t want to let anyone down when Marc was taken away from us all.”

Jodie has been working tirelessly to fight to get him back and fight the drug war.  According to Jodie, “Marc is still very much the same in his wonderfully brilliant, upbeat, inspiring way. But he was also forced to slow down and be patient in a terribly boring place – and he has used his time wisely, learning bass guitar and playing in a few different prison bands. He’s spent much time reading hundreds of books on all sorts of subjects, plus newspapers and numerous magazines.  That kind of thoughtful, uninterrupted absorption of information is almost impossible in the outside world, so he’s been able to contemplate a lot. He’s also seemingly gotten more youthful-looking somehow – probably because the many years of stress awaiting extradition and imprisonment is long gone!”

One reason Marc has not had to stress too much has been the intense dedication of his wife, Jodie.  Jeremiah speaks for many of us when he says, “Jodie is one of the most amazing people I’ve ever met. After being robbed of her beloved husband and hero, under brutal emotional conditions, she’s not only taken over managing Vancouver’s most popular headshop and vapor lounge and made it grow and blossom, but has become one of the leading marijuana activists in the country. I think Jodie finds strength in ceaselessly dedicating herself to the quest pioneered by her husband – she’s so busy and has so much on her shoulders.  I don’t think she has much time to think about the pain she’s feeling.”

When I asked her how she has managed to get through these extraordinary times, she said, “The enormous and constant kindness of supporters; the positive attitude Marc has maintained throughout a nightmarish daily existence that I can’t even imagine; and the knowledge that our movement is making progress on a bigger scale despite the setbacks and hardships. Marc’s mission to “Plant the Seeds of Freedom to Overgrow the Government” is being accomplished, even if there’s still a lot of work ahead.” 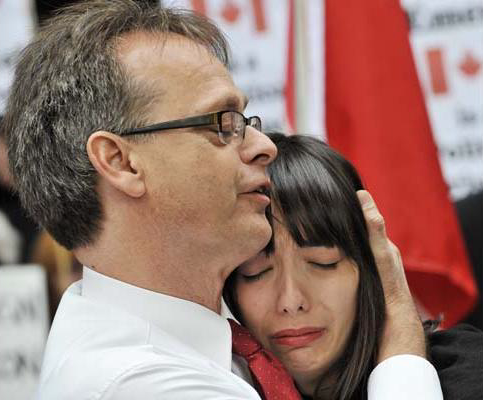 Her pain will be over soon.  However, no one knows exactly when that will be.  This was all she could tell me when I asked.  “His sentence ends on July 9th but they release foreign prisoners on Thursdays; the 10th is Thursday, so he only spends an extra night in there. However, he will then be in custody of Immigrations & Customs Enforcement and they’ll take him to a private prison in Louisiana to await deportation. We don’t know how long that will take; we’ve heard of it taking between three weeks and (the worst-case scenario) eight months for other Canadians to be deported after release from federal prison. But we hope that with campaigning from supporters and with pressure on the US and Canadian governments, they will process him quickly and he could be home later this summer. Once they are ready to deport him, he will be flown to Detroit – with little to no warning, so I’ll rush to the Vancouver airport to fly to Toronto – and be escorted to the border, where he will be able to walk onto Canadian soil in Windsor as a completely free man. I’ll hopefully be there in time to greet him, but I guarantee there will be a large contingent of fans and media to welcome him home.”

The outpouring of affection and admiration from fans will likely be like nothing this movement has ever seen.  For many, Marc has become a hero, on par with some of the greatest civil rights advocates of our era.  His relentless pursuit of legalizing cannabis has resulted in millions of cannabis plants being grown, millions of votes being cast to reform the laws, millions of minds being opened to the possibilities this plant has to offer.  There is no doubt he will be treated like royalty as he travels the country.

“I can’t wait until Marc is finally home so I can have my friend back,”  said Jeremiah.  “ Marc is not only a great boss who lovingly pushes his employees to achieve greatness, he’s also a caring friend full of personal insights and helpful advice. It will also be great to have him back on the front lines of our fight to end prohibition – where he belongs – especially since he’s going to be ready to kick some Conservative ass in the next election.”

Which is likely what we can expect him to be doing with Jodie.  “We’ll be spending some quality time together,” she said, “but definitely continuing our activism; staying involved in politics; managing our businesses; traveling to meet our
supporters and activists across BC, Canada, and worldwide; and campaigning for the Liberal Party of Canada in the next federal election because of the unprecedented legalization policy they’ve put forth.  So we’ll be busier than ever!  He’s outlined some of his ideas in his prison blogs, so I recommend people check those out at www.CannabisCulture.com if they’re interested in seeing what the Prince of Pot plans to do when he arrives home!”

As this is going to print, it seems like Jodie is even going to take a run at running for the Liberals in East Vancouver in the next federal election!   With some of the Liberals promising to legalize cannabis, they seem like the only hope against this repressive Conservative regime.  So much is at stake with this next election, as the environment, health care, judicial system, scientific institutions and aboriginal affairs appear to mean little to Harper and his minions.

Regardless of what he does in the future, Marc Emery has already earned a place in the history books for his courageous efforts to free this plant from the shackles of prohibition.  By sacrificing so much of his life to fight against the mighty forces of the US government, he has undermined the ability of the police to enforce the law, as he has helped to convince the general public that the prohibition of cannabis is a waste of their precious tax dollars.  His release from jail is almost perfectly timed with the sudden mass acceptance of cannabis, and we are all sitting on the edge of our seats waiting to see what he does next.  Whether he ends up touring in a band with Tommy Chong or setting for the high seas with Jodie, one thing is for sure:  Marc Emery is coming back home!