Deprecated: The $control_id argument is deprecated since version 3.5.0! in /home/oq5ayjaeetjt/public_html/wp-content/plugins/elementor/modules/dev-tools/deprecation.php on line 304
 Politics and Pot…Uneasy Bedfellows - Cannabis Digest
Skip to content

Those who have known me for many years are aware that I have consistently advocated for major reforms to Canada’s drug laws. The current perception of drug users as faceless criminals needs to shift to include neighbours, co-workers, and family members.  As patients, individuals require access to cannabis for legitimate medicinal purposes and/or compassionate health care.  As recreational users, many simply want their sense of personal responsibility respected, much like those who partake in the socially accepted drug…alcohol.

Over forty-five years ago, the Liberal Government of Pierre Trudeau commissioned Gerald LeDain to scientifically research existing drug laws for possible changes and amendments. All agreed that the status quo was ineffective.

In June 1970, the Commission of Inquiry into the Non-Medical Use of Drugs delivered its interim report, calling for the decriminalization of all drugs.  Analysts called it “one of the most politically-explosive documents ever put before the government.”

Many in the country inhaled deeply; some with pleasure, and others with trepidation. I remember driving around to police stations throughout downtown Toronto with my friend Brendan, to announce the imminent cessation of hostilities in the War on Drugs.

Liberal Health Minister John Munro announced that his government would immediately look into moving marijuana out of the Criminal Code and into the Food and Drug Act.  Justice Minister John Turner was blindsided by this announcement, and became apoplectic, calling it, among other things, political suicide.

And once again, politics reared its ugly head and drowned out LeDain’s recommendations about drug education and “wise, informed freedom of choice.”  The Liberal government ignored the LeDain commission’s report. There are no votes here.

Most of those involved in commissioning or writing the report are long dead. Pierre Trudeau’s son, Justin Trudeau, was not even born (along with many who are reading this). If the wheels of justice grind slowly, the wheels of government outright refuse to get into gear. 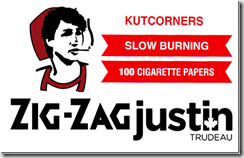 Trudeau the Younger is now calling for the legalization of marijuana.  Within hours of his announcement that he favours legalization (much to the dismay of many in his own party), the current Harper government rummaged about in the basement and dragged out the talking bogeyman doll from the thirties: “These drugs are illegal because of the harmful effect they have on users and on society. We will continue protecting the interests of families across this country. Our government has no interest in seeing marijuana legalized or made more easily available to youth.”

Yes indeed: “think of the children”. Please. But also think about mandatory minimum sentences handed down to them, thanks to changes in the law brought in by the so-called protectors of the children and families. Say what you will about their attitude – at least we know where they stand.

Defending such a stance requires that the government judiciously ignore decades of peer-reviewed scientific studies, economic analyses, and sociological studies that demonstrate a lack of harmful effects. This is, of course, business as usual for the Harper Government (TM Reg’d) when their personal ideology is threatened.

We know where the Conservative Party of Canada stands today (welcome to the 1930s). We know where the Leader of the Liberal Party stands (welcome to the 1970s). The NDP say yes; their Leader first says no, then maybe, and then yes only to decriminalization. Canadians are as confused about the stance of the politicians as the politicians are.  As the winds change direction, so too do the political positions.
The Green Party of Canada has consistently advocated positively for drug law reform, especially for the full legalization of marijuana.

All of this is moot at the moment. The party of No is in power. The parties of Yes and Maybe are in Opposition. The real question worth asking is: If a party of Yes comes to power in the next election, will these changes come to fruition?  Or will we be subjected to yet another multi-year study in which the recommendations are quietly ignored?  Will it be an election platform issue, or will it be buried in the someday in the future file?

The Green Party of Canada policy clearly states the following:

“Between 2008 and 2011, according to the Department of Justice, Canada spent $311 million targeting illicit drugs, with a majority of that money going to law enforcement. Most of that was for the ‘war’ against cannabis (marijuana). Marijuana prohibition is also prohibitively costly in other ways; it criminalizes youth, fosters organized crime, and puts unbearable pressure on our judicial system.  Cannabis prohibition, which has gone on for decades, has utterly failed and has not led to reduced drug use in Canada.

After analyzing the recommendation of the Canadian Senate’s 2002 Special Committee on Drugs and the examples of strategies used by some European countries, the Green Party of Canada has come to the conclusion that it is time to legalize the adult use of marijuana. Furthermore, the Greens believe that addictions should be treated as a health problem, not as criminal offences.

≈ Legalize marijuana by removing marijuana from the controlled drug schedule;

≈ Create a regulatory framework for the safe production of marijuana by small, independent growers;

≈ Develop a taxation rate for marijuana similar to that of tobacco;

≈ Establish the sale of marijuana to adults for medicinal or personal use through licensed distribution outlets;

Educate the public about the health threats of marijuana, tobacco, and other drug use;

≈ Launch a public consultation on the decriminalization of illicit drugs, considering the current high costs of the law enforcement effort;

This policy falls in line with the Portuguese model initiated in 2000, where the traditional prohibition approach to the “War on Drugs” failed miserably, as it has in all other countries.  Decriminalization has taken some pressure off the Portuguese criminal justice system.  In 2000, approximately 14,000 people were arrested for drug-related crimes in Portugal. After decriminalization, this number dropped to an average of 5,000 to 5,500 people per year.  During this time, the number of people cited for administrative drug use offenses remained constant at about 6,000 per year.

Therefore, there has not been a great surge in contact between drug offenders and the Portuguese police after decriminalization.  Not surprisingly, this is exactly what the LeDain Commission predicted 45 years ago in Canada. 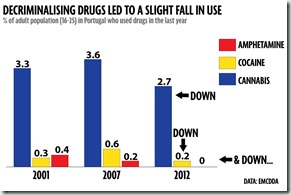 In 1999, a few years prior to decriminalization, Portugal had the highest number of drug-related AIDS cases in the European Union and the second highest prevalence of HIV among drug-infected users. The number of drug-related AIDS cases was also increasing, even though the number was decreasing in neighboring France, Spain, and Italy. Research indicates a decline in drug-related disease in Portugal after decriminalization.  Incidences of HIV and AIDS among drug users declined substantially.

Portugal’s National Drug Control Strategy states, “This strategy specifies eight principles, which embody a set of values that should guide interventions in this area. ‘Humanism’, for example, is the recognition of the inalienable human dignity of citizens, including drug users, and translates into a commitment to offer a wide range of services to those in need and to adopt a legal framework that causes no harm to them. ‘Pragmatism’ calls for the adoption of solutions and interventions that are based on scientific knowledge, while ‘Participation’ calls for the involvement of the community in drug policy definition and implementation.” 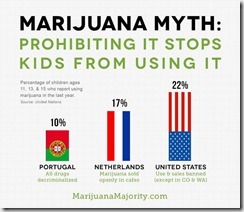 Why not examine the Portuguese model and consider adopting some of their principles?  Full legalization of cannabis, as proposed by Green Party policy, will eliminate the need for all Health Canada regulations and interference concerning medicinal cannabis.  In addition, the nebulous ethical and legal implications impeding the medical profession will be removed, and law enforcement resources can be re-directed to areas where they are crucially needed.

Forty-five years is a long time to wait for someone with political backbone to step up and act in the best interest of all citizens, and not just in the narrow interests of a party’s electability or a leader’s personal ideology.

It truly is time to move into the twenty-first century.

(old picture of the product selection from the now incorporated Victoria Cannabis Buyers Club) By Owen Smith Part 1: The Journey Begins I began learning about the cannabis plant when I started college in 2002—not from any of my classes, but from the small Hempology101 circle that was formed each Wednesday on the lawn in […]

From the tender age of 13, Gayle Quin was destined to be a cannabis activist. It began in 1970.  Her mom threw out plants she found in the house. Gayle defiantly picked the plants up and replanted them near her home. There was a very good reason she has fought so hard for this […]