Deprecated: The $control_id argument is deprecated since version 3.5.0! in /home/oq5ayjaeetjt/public_html/wp-content/plugins/elementor/modules/dev-tools/deprecation.php on line 304
 Pottawa: Dispensaries Flourish After Raids and Robberies - Cannabis Digest
Skip to content

Since the first marijuana dispensary in Ottawa opened in late 2015, the total number of dispensaries has grown to roughly twenty, depending on who you ask. There are even some dispensaries that the media and greater public don’t know about, but I and many others do, so the number is likely closer to twenty four.

It has not been without growing pains however. There have been seven dispensary robberies reported since the beginning of September, with one place even getting robbed twice in one day (although this wasn’t reported to police), and another having a truck literally driven right through the front of the store. Several other robberies weren’t reported to police or the media. 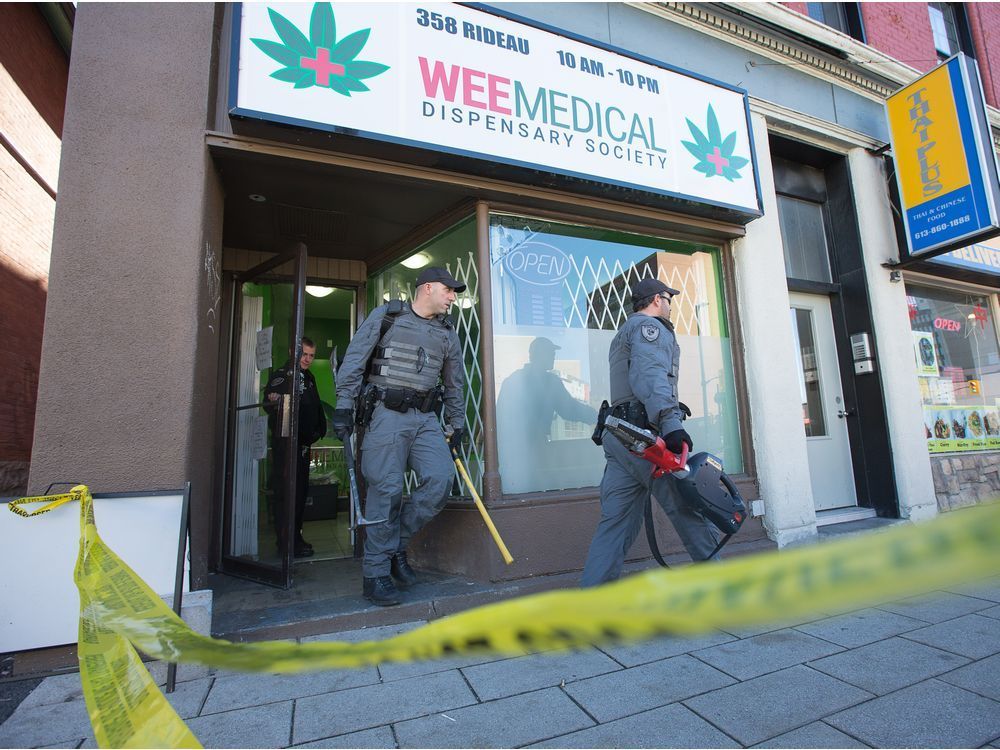 If you are the armed-robbery type, the motivation for hitting these places is pretty simple: there is likely lots of cash and clean, re-sellable pot on site, not much security in the way of locks or guards or weapons, a staff who simply will not take a bullet for a minimum wage job, and a steep disinclination on the part of the owners and managers to phone up the police and say “Get down here, quick! Someone just stole all our pot!”

It started on September 6th when two guys with a gun assaulted a worker and robbed the WeeMedical Dispensary on Rideau Street. On October 23rd, CannaGreen on St. Joseph Boulevard in Orleans was robbed by two men, one with a knife and one with a gun. Then on the 26th, a handgun accompanied by three idiots robbed the Ottawa Cannabis Dispensary on Laperriere Avenue. The next day, four morons with a gun robbed a South Keys dispensary, and on November 5th three goons and one gun robbed an Iber Road dispensary while a fourth goon waited outside. Two jerks robbed the Sylk Medy dispensary on Gladstone Avenue on November 11th, and on the 16th a dispensary was robbed on Antares Drive.

In mid-November, four men were charged with the robberies that occurred on November 5th, 11th, and 16th at Sylk Medy dispensary and the dispensary on Antares Drive on. Steven Constant, 23, and Immanuel Toussaint, 25, from Ottawa, and Dieudonné Ngondimwiki, 23, of Gatineau, and Cheslie Pharel, 22, of Vars, face a number of robbery-related charges, and may face more as the investigations continue. 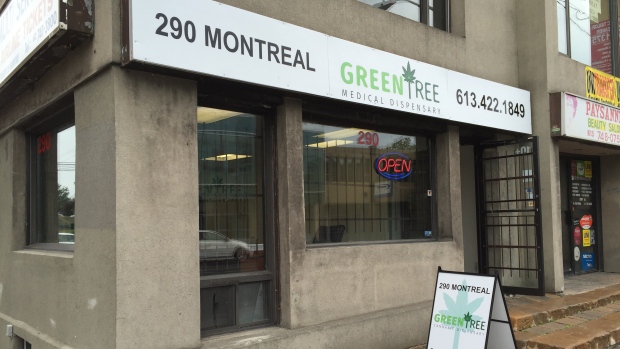 Of course, in the middle of all this came the bust. There are a lot of truly disgusting days in Ottawa’s history, but not many of them rank higher than November 4th, 2016: the day Ottawa Police wasted time, money, and the public’s rapidly-shrinking goodwill on six dispensary busts across the city. Targeting CannaGreen, three Green Tree Medical Dispensary locations, and two WeeMedical Dispensary locations, nine people in total were charged.

Among them, Shawn MacAleese, a bud tender at Green Tree Dispensary on Montreal Road and the first person to ever be placed in handcuffs for working in a pot dispensary in Ottawa’s history.

“I started working at Green Tree on St. Laurent in August.” He says. “They liked my work so they moved me to the flagship location.”

MacAleese says the police had come into the store many times before, to check footage mostly, but he knew something was amiss when he saw ski masks. 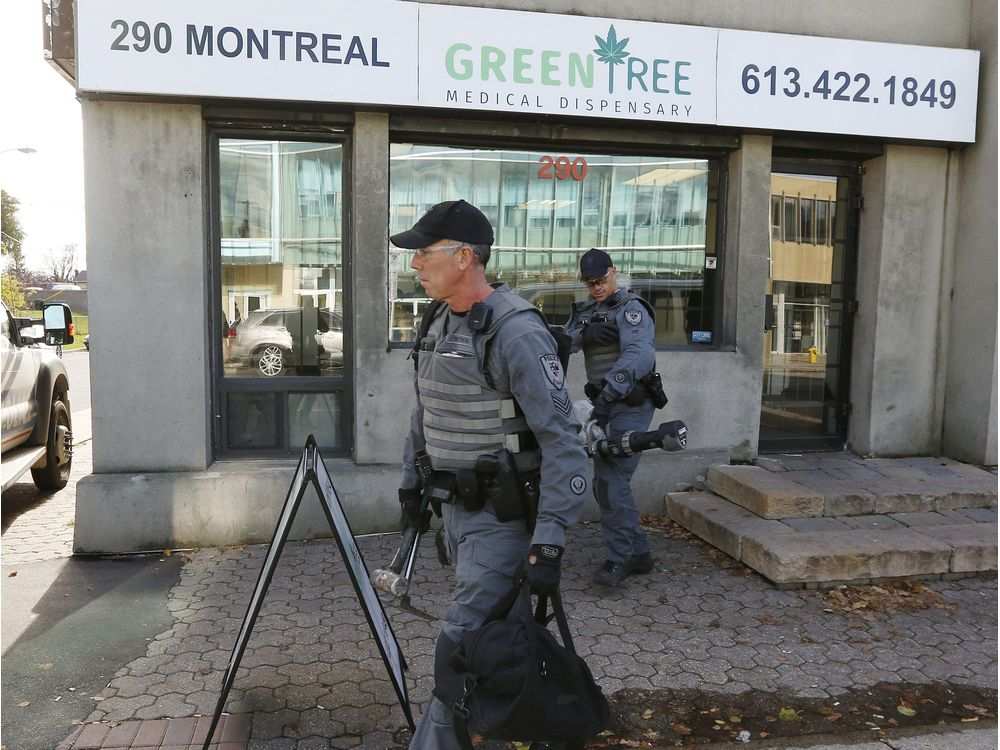 In the back of the cruiser, talking to the officer who very politely arrested him, he learned that when the officers found out that their day’s assignment was to bust six pot dispensaries, it was, according to the officer, “an eye-roll moment”.

However, MacAleese did spend time in a cold cell, he lost his job, and he is facing fourteen different charges including simple possession, possession with intent, 11 trafficking charges, and proceeds of crime under $5000. He could do time. Although he knew perfectly well that many people still consider marijuana laws valid and enforceable, he shares this writer’s attitude about it namely that: not only has the CDSA (as it pertains to cannabis) been rendered of no force or effect by many court rulings, but sec. 262 of the criminal code absolves him of the obligation to adhere to that law even if it hadn’t been invalidated.

He was also led to believe that his boss, one Mr. Robert Clarke of Vancouver, British Columbia, was going to have his back in the event of a bust. That is what the managers who hired him were told to tell him, anyway, but when things actually got hairy, MacAleese and his co-workers were left on their own.

MacAleese is now jobless and without savings, so it is very fortunate that someone in Saskatoon heard of his plight and hired Toronto lawyer Paul Lewin to defend him. His co-workers – simple 20-something bud-tenders – have not been as lucky.

The reason for the busts – beyond the obvious – are not clear. Why bust these six and not the others? Was it a case of simple officer availability? Police spokespeople say it was because these six places were selling to people who were not genuinely in medical need, but were selling to anyone over the age of 19. MacAleese disputes this, at least in relation to the stores that he worked in.

“The clients see a doctor and the doctor confirms them as medical users. Then they can buy from us after we sign them up. We didn’t just sell it to anyone who flashed an ID.”

MacAleese will also be co-hosting what is being billed as possibly The Last People’s 420 on Parliament Hill in April of 2017. He and a handful of other Ottawa-area activists are putting the event together, but they worry that by April of 2018, the event will be commandeered and corporatized by some ACMPR company. 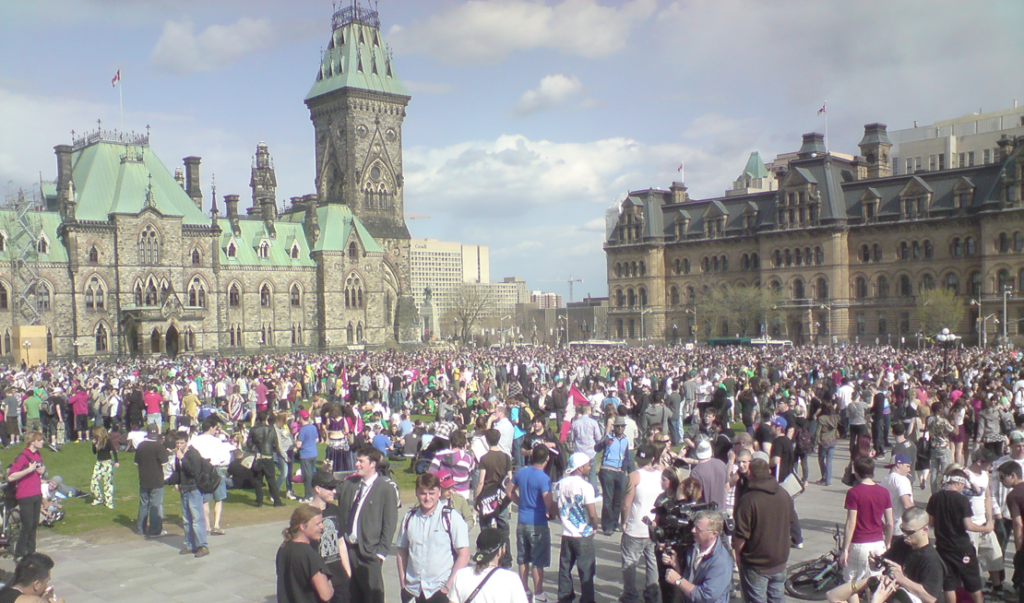 None of this has been a deterrent to the dispensaries however. Police were hoping that the raids would scare some more of them into closing but it didn’t. Ottawa Police Chief Charles Bordeleau says that these places “are not welcome in the community”, but thousands of Ottawans have proven him to be a liar. Aside from a few disgruntled neighbours, some hand-wringing parents, the constant scandalization and police-goading of the Ottawa Citizen/Sun editorial boards, and the huffy protestations of a few city councillors, no serious complaints about the presence of the dispensaries have been logged.

The police are leaning on landlords too, in an effort to get them to kick their “illegal” tenants out, with mixed results. Four of the six locations were open again within a week and, with the Task Force’s December recommendations to the government suggesting dispensaries and lounges should be part of the new federal “legalization” regulations, I think we can expect many more to open up over the winter, both in Ottawa and across the country.

In the meantime, Ottawa’s medical marijuana community must continue to grow and flourish while constantly bearing the stigmas of the media and living in fear of police.

Ted Smith This May long weekend marked 20 years since I have had a drink of alcohol, a decision that I believe saved my life from one of misery and woe.  Having dedicated my life to cannabis, quitting drinking was an easy decision to make for many reasons and one I cannot imagine regretting.   There […]

Twenty two years ago, at the tender age of 25, I started to attend Hempology 101 meetings and was infected with a passion that has fueled me in a course that would change Canadian history. That passion brought me together with the most incredible woman I have ever met, a woman who died at home […]