Deprecated: The $control_id argument is deprecated since version 3.5.0! in /home/oq5ayjaeetjt/public_html/wp-content/plugins/elementor/modules/dev-tools/deprecation.php on line 304
 Publisher’s Note: A Humbling Award - Cannabis Digest
Skip to content 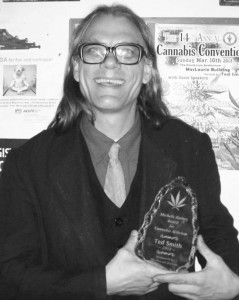 Recently, I was presented with the Michelle Rainey Award by the community of activists on the <medpot.net> forums. Being the first recipient of this award is a huge honour for me. In fact, it is likely the most meaningful gift I have ever received.

First off, the award was named after one of the most brilliant, inspiring, and beautiful spirits that has graced the cannabis movement with her words, deeds, and hugs. Michelle Rainey passed away a few years ago after a short fight with cancer. We dedicated issue #27 to her in an attempt to give those who never had the opportunity to meet her get a sense of what a wonderful woman she was. She spent the last years of her life fighting and pleading for legalization, saving so little for herself that the end came that much sooner.

Second, it is overwhelming to think that out of all of the people in this country fighting for the legalization of cannabis, that I would be chosen as the first winner of this award. Granted, last year was the best year of my life, for a number of reasons. But there are so many other successful, dedicated activists who deserve to be awarded for their efforts, that is seems unfair to single out any one of us. It was incredible luck that the year many of my dreams came true is the year that this award was organized.

Third, the <medpot.net> community is a special group of online activists. The founder, Marc Paquette, has put together the one of the most active news site in the world, despite dealing with health problems so serious he rarely leaves his property. At the same time, a number of Canadian patients and activists have used this site to network with each other, sharing political insights and helping farmers grow good medicine. While there are a number of prominent activist who occasionally use <medpot.net>, many of the active members are those most affected by the medical cannabis laws in Canada.

Fourth, there are very few occasions where people in the cannabis movement take the time to recognize the work of an individual. Aside from cups that focus on who is growing the best herb, I am not aware of any awards like this, certainly not in Canada. A few years ago Cannabis Health magazine gave out a number of awards, one of which I received, but they did not give out pretty awards like I got, and it only happened once before they folded. Hopefully more groups will consider rewarding the efforts of others using the democratic principles similar to the one used by <medpot.net>

Finally, receiving this award has affirmed my convictions, validating what I have chosen to do with my life. It has also paid tribute to the growing team of people that support me, working at VCBC, writing for the newspaper, organizing club activities, promoting events, and sharing the good word. Most of all, this award means a lot to Gayle, who works so hard at my side. Without the incredible team I have around me my efforts would have little impact, and this award belongs to everyone who helps me as much as it belongs to me.

Ironically, winning this has only made me want to prove I am worthy of such an honour. Not that I want to win again, in fact I will make sure I do not get nominated again. Being the first recipient of the Michelle Rainey Award both acknowledges what I have accomplished and recognizes the great future I have ahead.

Publisher’s Note: Time to Work Together

Ted Smith   One of the dilemmas in the cannabis movement in Canada has been the tension that is occasionally felt between medical and recreational cannabis users. We must learn to work together more often if we want to see change happen. That does not mean we should all have the same agenda, but we […]

We are experiencing a historic moment, one much bigger than most people realize. Legalizing cannabis will not change the world overnight, but with the flick of a switch we are turning on the most potent plant this world has to offer. If you are tuned into the vibe, it is electric, vibrant and ready to […]