How to Talk To Your Fellow Human About Legalizing Marijuana 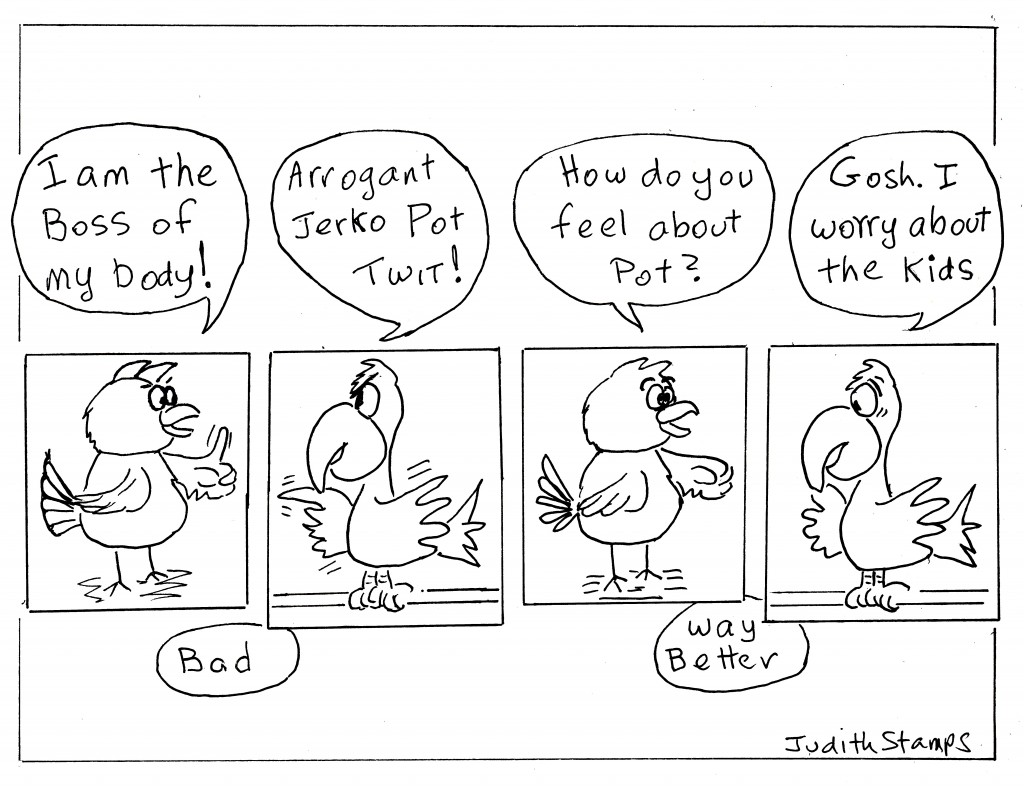 Thoughts on the Upcoming Sensible BC Conference

Those of us who work on campaigns or who, in the course of everyday life, have occasion to discuss marijuana with ‘alternate’ populations, will know how hard it is to control the agenda. Here, gleaned from experience and from a number of sources1, are a few sensible guidelines.

1. ORDINARY BIAS. Everyone has a circle of friends, relations, work buddies and acquaintances. These circles are self-selected; they never represent the population as a whole. The people with whom you are talking may have never met anyone who likes marijuana. Their knowledge may be limited to news reports on busts, along with skewed facts and figures provided by law enforcement. And you may never have met anyone quite like them.

2. CULT AND WAR MENTALITIES. There are some people with views so extreme that it is impossible for them to listen to new arguments and new facts. If they tell you that enjoying marijuana is immoral and kills brain cells, keep cool, disengage, and move on.

3. LANGUAGE BIAS. Words like ‘drug,’ ‘addiction,’ and ‘gateway’ are a kind of drug. They’re loaded. Talk around these words by shifting the agenda to facts about arrests, and about the percentages of people who say they would like the laws changed.

Don’t say: I have a god given right to control what I put into my body. Seriously. If you say this you have dismissed all of your discussants’ concerns before even hearing them. In that case why should they listen to you? Start by finding common ground. Ask: What are your concerns?

1. “I don’t want the kids to get it.” I share your concern. The present law leaves it in the hands of a black market, making it available without ID. All the empirical evidence from places like the Netherlands where it has been permitted show a decrease in teen access. In any case, placing marijuana in a forbidden fruit bubble may only serve to attract them. “But if we legalize, and Ma and Grandma are seen smoking, what kind of message are we sending the teens?” Since when have teens specialized in copying elders?

PS. AVOID the word ‘use.’ It’s a drug too. Try: enjoy, practice, like, fancy, benefit from, choose, or relax with. If your discussant uses loaded words, ignore it. Focus on the concern.

2. “I don’t want this to become a society of users and addicts.” Neither do I. But there is no evidence to show that this happens. It is decriminalized in the Netherlands, Czech Republic, Italy, Spain, Guatemala, Portugal and elsewhere. It is legal in Uruguay and two (or whatever number) American States. They are all still very normal places.

3. “I don’t support the use of drugs.” I agree with you. I don’t either. I hate the smell of cigars. I try to convince everyone who uses them not to. I won’t let them smoke around me. But I know better than to try to get them arrested, prosecuted or put into prison.

4. “I’m worried about unforeseen health risks.” Don’t say: “There are no health risks.” You can’t prove something like that. Say: I share your concern. In this world there are no absolute guarantees. There are only more or less reasonable approaches. Thus far marijuana has been used for thousands of years without serious mishap. To go by this evidence, it is more reasonable to assume that it will continue this way.

5. “But the stuff these days is so much more potent.” We have no base line for the sixties and seventies, although it is generally agreed that contemporary cannabis is stronger. But concentrations for the past twenty years have remained stable. It’s not accelerating. Second, different concentrations are taken in different ways. We guzzle mugs of beer; we sip shots of whiskey or we water it down. If you take marijuana with a vaporizer, you quickly get a sense of the effect. If it feels potent, you take less. Having too much is not fun. No one delights in feeling sick.

6. “I see your point but we don’t need another potentially addictive substance.” If we were thinking of importing this practice from another planet, that might be a concern. But over half the people in this area already like it, and have for years. In British Columbia 53% have tried it. (Memorize the stat in your area.) And it has been popular here for sixty years. That’s three generations. The real question is: Why, given the evidence on relative risks, are these people are being singled out for punishment?

6. “I hate the smell. It makes me sick.” Oh I know what you mean. When some Europeans first came to North America with garlic they were called garlic eaters and shunned. People thought they were disgusting. Now we like garlic and believe it is beneficial. Cultural attitudes do change. And luckily, the growing popularity of vaporizers and well made edibles cuts down on this problem.

Don’t say: This is what I believe to be true. If you do and your discussants offer a forceful rebuttal, your position is weakened. Encourage them to say what they believe. Then you can rebut.

Don’t Try To Convert People: Encourage them to take one small step. 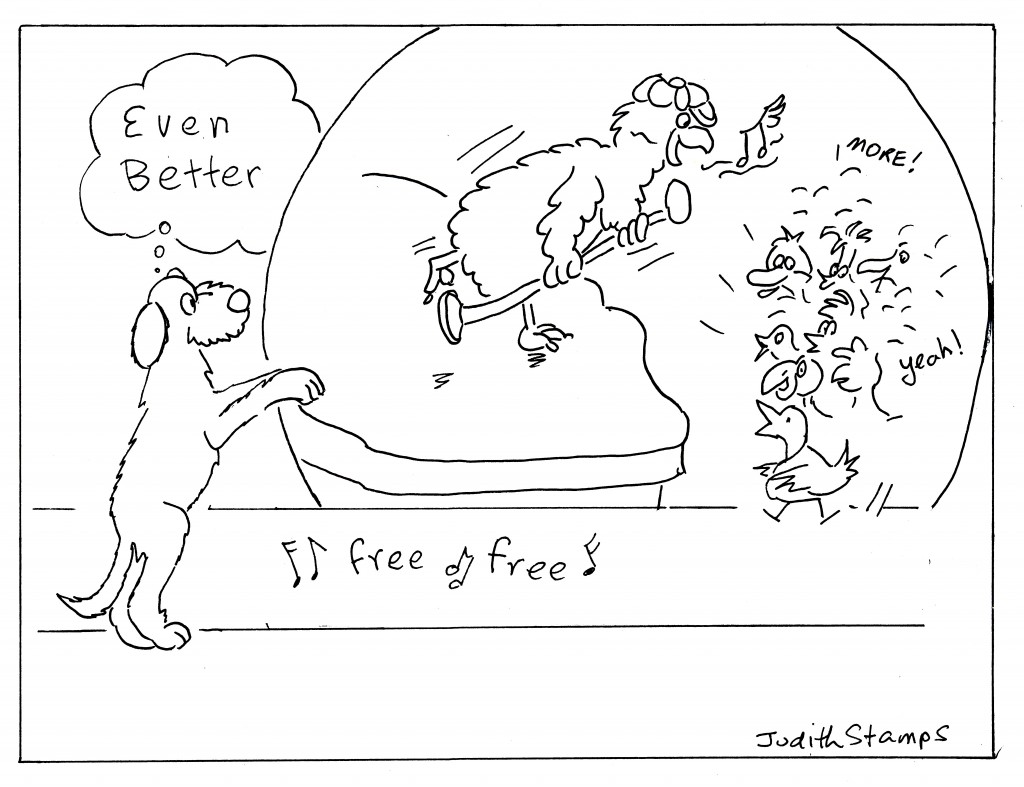 Say: These laws were put in place historically out of ignorance and racial hatred. It never had anything to do with health and safety. It was more a fear of racial contamination. Isn’t it about time we re-examine this?

Ask: How many people do you imagine we would need to prosecute and imprison to make prohibition work? In the US, according the Department of Justice figures for 2007, there are 33, 655 pot fans in state prisons and 10, 485 in federal prisons, at a cost of a billion dollars per year. Hundreds of thousands more have been arrested, costing more billions. In Canada, 21,000 per year are arrested for marijuana possession. This costs us 300 million dollars a year. And that doesn’t count the proportion of justice system time these things take up. Thus far, there has been no decrease in the fans. So how many more will it take, do you figure? Whatever the number, multiply it according to the above stats to get the cost.2

Emphasize: There is no such thing as a solution, if by solution you mean that all of the problems will go away. The world isn’t like that. There are only less fair and fairer approaches; less sensible and more sensible approaches.

Say: According to The National Institute on Drug Abuse (NIDA), marijuana has a 9% addiction rate. That is lower than for any other substance. Tobacco, at 33%, is the highest. And other substances sometimes cause death. Marijuana does not. Why would any sane society choose to torment the marijuana fans?

ADD More Emphatically: Besides this, citizens in a democratic society are entitled to equal protection under the law. But the fans of cannabis are denied protection. Given the stats provided by authorities on relative harms, how is this justified?

Say: People have marijuana because they enjoy it. Thus far this is not a society that prosecutes people for enjoying things—especially things that affect only them. Many people agree that jelly donuts are not great food. But no one is prosecuted for eating or selling them. (Don’t rattle on about the health benefits of recreational marijuana. Your friends will agree with you. Complete strangers to the subject will get mental shutdown and walk away. Remember, one step at a time.)

Silly But Common Objection: “But marijuana does harm people other than the fanciers. If Joe likes marijuana this fact often offends and hurts the feelings of family members, acquaintances and friends.” Young people get this a lot. Answer. This is true. But it can’t make marijuana ethically objectionable. If it did, it would be unethical to break up with a friend, get a divorce, quit a job, or hand a student a failing grade. They also hurt people’s feelings. Besides, we don’t prosecute such things.

Final Scribble. If you have heard enough simple strategies, here is a wildly utopian thought. Every society fosters some set of abilities. Around here, we push obedience to organized authority, conformity, and the desire to accumulate stuff. We bathe daily in ads that invite us to compare ourselves to others. We encourage harsh, uncharitable attitudes: “He’s a loser.” In the past, people who have relaxed with marijuana have tried to reject these values. Is this because they were young? They were unable to fit in? They all had epiphanies? Or was it, at least in part, because they absorbed all those cannabinoids? I look forward to finding out.

1a) http://druglibrary.org/schaffer/debate/debate.htm the drug policy debate and dea pamphlet on how to hold you own.

1b) Jefferson M. Fish, How To Legalize Drugs. Especially the essays in Section 1A by Fish; Husak; and Weinberg.

Next article Backdoor Medicine: How Cannabis Suppositories Can Save Lives

Digest Admin·March 22, 2017
There are no comments yet No comments

Cannabis is Growing in Town