(from the Cannabis Digest archives: Nov 2012)

High everyone, from the UK to all CD readers!

Noddy here to talk about what is going on in the cannabis movement this side of the pond. I also better take this opportunity to introduce myself a little bit, as some of you maybe wondering who I am. I am a 42 year old father (pt) from Edinburgh, the capital city of Scotland, here in the UK in Europe. The city is famous for it’s Castle and also its International Fringe Festival. It’s a festival of festivals, which needs a hempfest in there amongst all the other festivals, as there is a festival for everything else.

Anyway, I suffer from grand mal epilepsy, as well as having petit mal seizures, which cannabis controls, where conventional medicine never did. I also have physical disabilities, too. I was born with missing digits on my hands and feet (thanks to phat pharma side effects!). I get severe pain in my foot sometimes, due to the bone structure of one of them, but herbal cannabis relieves that pain too, as well as my seizures, along with numerous other beneficial reasons.

I’ve used and been around cannabis for 27 plus years. I stumbled upon the Hempology 101 lectures by Ted Smith, of which I thought the subjects of the lectures and guest speakers on all the different topics of cannabis/hemp were intriguing and fascinating to say the least. I have a Hempology 101 certificate proudly on my wall, too, hence the reason I do updates for the CD on this side of our Global village. That’s enough about me and how I became involved with Hempology 101 and the CD—lets roll on with the update… 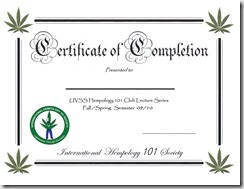 Well, here in the UK there has been quit a buzz in all of the cannabis communities up and down the country, as the UKCSCs (Cannabis Social Clubs) have taken off like wild fire and have sprung up in nearly every area of the Norml UK. NormlUK.org is the spearhead of the UKCSCs, as I am led to believe. The social clubs/ communities are decentralized networks, so there is not one main figure head, rather more of a collective of people, as well as being an non-governmental organization and non-profit. The are based on the same ones springing up in and around Europe, in the likes of Spain, Belgium, etc.

The clubs seem to be in full bloom south of the border in England and Wales, too. In my opinion in the UK prohibition gets enforced more the further north of Britain you go. So the CSCs in the south seem to be flourishing more.

The point of the clubs are to let the communities on a whole realize that there is a need for them, and taking the black market into the light instead of wasting more government coffers on a failed drugs policy, as well as protecting our children from scrupulous drug dealers and all the other damages of a failed prohibition.

GW Pharmaceuticals, who produce Sativex, are now in the process of producing a cannabis based anti epileptic medicine. My old doctor stood in court swearing that cannabis helped my seizures and if it were legal she would prescribe it to me. Why can’t I grow a few plants rather than wait for phat pharma to produce something?

Prohibition sucks. Period. In a previous article, I wrote of the Schengen Agreement (previously known as the Amsterdam Treaty) which we thought was a loop hole in the law (more info on this, if you read my article on Pinky’s trip to Amsterdam in a previous issue of CD). Dutch medical users came over from Holland to the UK and medicated away freely on the streets of London, but if the cannabis were to be used by a UK citizen they’d be breaking the law. The Dutch visitors, or any other country that has official licensed medpot users, would not be breaking the law!

The Weedpass is still coming into effect in Holland in Jan. 2013, though some local mayors in Holland are rejecting the new weedpass laws which coffee shop owners are not going to comply with, in and around Amsterdam.

As far as I understand the High Times Cannabis Cup will still be on this year in Nov. as it usually is. There was a cannabis cup in the UK this year (2012), though a very much underground affair—but hey, the ball is rolling, Nepalese style! I never at- tended as I hadn’t realized it was on until after the event. Luckily got to hear some of it on the <Dopefiend.co.uk> podcasts.

I’d also like to welcome back Winston Mathews, who is a leading activist here in the UK. Winston had been incarcerated for nine months for growing his own medicine. Disgusting in this day and age, that you are not allowed to heal yourself and your options are often lim- ited toxic damaging alternatives. Where is the sense in that?

Until next time my hempy friends Stay well and take care. One Love!

(from the Cannabis Digest archives: Nov 2012)

adminold·October 16, 2011
There are no comments yet No comments

The Shake from the Smoke: A Catalyst for Change