Adam Greenblatt is a 31-year-old career cannabis advocate, having been immersed in the cannabis social justice movement and medical cannabis industry for the past decade. Like other pioneer advocates, his efforts were charged by the suffering of someone dear to him.

At 18 yrs. old, Adam was getting into trouble with cannabis at school. Adam’s father had run out of medical options to treat his Multiple Sclerosis: Adam was helping him access cannabis. The infuriating hypocrisy of getting in trouble for picking up his dad’s prescription lit a fire inside him.

Greenblatt moved to Montreal and became involved with the Bloc Pot, Quebec’s Marijuana Party. In 2004 he ran for office against veteran politician Irwin Cotler, who currently serves as a Liberal MP. Although his political career was short lived, the experience led him to a job at a medical cannabis dispensary. At the Montreal Compassion Centre Adam began dealing directly with growers and patients while learning about the myriad medical conditions that cannabis was being used to treat.

He credits his experience working at the MCC for providing practical experience but he mostly learned about the science through years of pouring overCannabis Culture forums, reading books, and news-hawking. Eventually his experience at MCC became a lesson in how not to run a dispensary. Adam left only a few months before they were raided by police.

In 2010, the Culture 420 club in Lachine and four other compassion clubs in nearby Quebec and Montreal were raided simultaneously. An investigation found that the newest dispensary to open, the Culture 420 club, would accept a self-diagnosis for cannabis signed by a commissioner of oaths (link). Seeing this, police painted all the dispensaries with the same brush raiding and shutting them down.

After the clubs were closed, patients began calling Adam, looking for a way to access their medicine. In the midst of this volatility he helped to open the Medical Cannabis Access Society with his partner “in life and crime” Erin Prosk.

The two began supplying dispensaries in Toronto, Guelph and Victoria, BC while helping people access Health Canada’s Marihuana Medical Access Regulations. The Society’s focus on professionalism aimed to raise the bar amongst dispensaries. He co-founded CAMCD, who have developed a set of standards and best practices for dispensaries, and have been actively lobbying municipal and federal governments.

In April 2014, when the Marihuana for Medical Purposes Regulations came into effect, he chose to close both organizations and created Santé Cannabis. Located in Montreal, Santé Cannabis became the first ‘full service medical cannabis clinic’ in Quebec. Quebec doctors have been more reluctant than any other to approve a medical cannabis treatment. 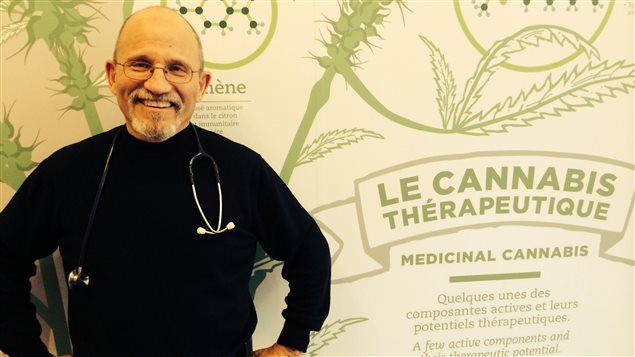 While they have no cannabis on site, they have 7 compassionate physicians with knowledge of cannabis who sign patients up for the MMPR and also provide Sativex and Nabilone. By providing access to physicians, they are tackling the biggest obstacle Quebec patients face on their path to legally accessing medical cannabis. The College des Medecins du Quebec suggested a prohibition on the prescription of cannabis outright, until they were informed that such a move would be unconstitutional.

In a joint effort between McGill University Health Centre, the CCIC and the CMQ the Quebec Cannabis Registry was launched to collect data about Quebec medical cannabis patients by keeping track of the quantity, effects and side-effects of their use. While some question whether it is ethical to force patients into a research study to access their medicine, Santé cannabis is implementing it with the goal to improve the safety and efficacy of medical cannabis products and services.

Santé cannabis helps patients to distinguish between licensed producer’s. Not all L.P.’s offer the same quality products and services. With their intimate knowledge of the industry, they dialogue and advocate for patients who find the MMPR a nightmare to navigate.

Another important service they provide is making oils, resins and hash for patients; They keep it simple, making tinctures and honey oil as well as vegetable oil infusions for patients: the most popular are butter, Avocado and Coconut oil. They provide recipes for people to make at home, offer rolling services and sell vaporizers.

Santé Cannabis was an intervener in my case at the Supreme Court of Canada. Part of their written contribution was the story of Liam and Mandy McKnight. When the decision was handed down, Mandy’s use of cannabis oil to relieve Liam’s seizures was the top story on the news. This helped force Health Canada to open the market up to Licensed Producers to sell oils to patients. The arbitrary limits of the Section 56 exemptions are set very low but high enough to suit some Patients (including Liam).

Currently only a few Licensed producers have licenses to sell cannabis oils and are struggling to keep up with demand. That makes the continued work of Santé Cannabis and others to help educate patients on how best to utilize this diverse medicine ever more important. Having just celebrated their one year anniversary, Santé Cannabis has future plans to open more clinics, host cannabis oil workshops and conduct research projects.

take a listen to my interview with Adam on Time4Hemp radio