The Evolution of Metabolism, Homeostasis and the Endocannabinoid Signaling System.

Homeostasis is a term that is used to describe both the survival of organisms in an ecosystem and the successful survival of cells inside of an organism. Organisms and cell populations can maintain homeostasis in an environment when they have a steady level of births and deaths. Metabolism of different foods or substrates (sugars, carbohydrates, starches, proteins and fats) requires a series of different protein enzymes that breaks down each of these food sources. Cells that have the necessary enzyme systems required to metabolize different types of food sources can adapt to scarcity of one food and extract energy from alternative food sources.

Homeostasis is adapting to both internal and external variations in food availability, temperature, PH and other environmental pressures.  The organism that can change what it metabolizes has the survival advantage. This means; Metabolic Flexibility is Adaptability and Adaptability is Homeostasis!

Homeostasis is brought about by feedback inhibition of an enzyme process or cascade. This controls the overall rate of the metabolic process. 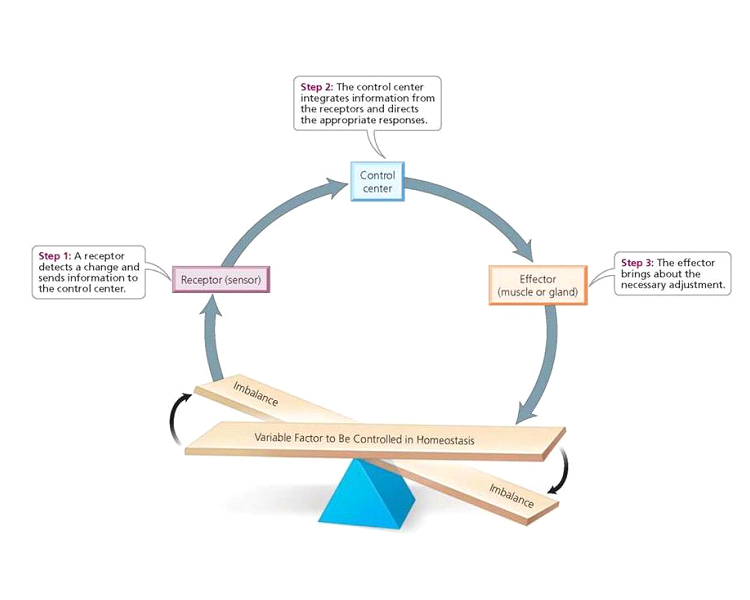 Throughout evolution, cells had to adjust to climatic fluctuations in order to survive. As cells organized and became living organisms, environmental pressures determined life and death. In order to survive, an organism had to have the ability to burn different fuels when primary fuel sources were scant.  Evolutionary pressure caused cells to organize. Cells were forced to specialize into tissue layers that formed limbs for mobility, guts for processing food and sensory organs for sensing the environment.

When cells collaborate together, they must have cellular communication. By sensing the environment and responding to what other cells do, the individual cell lives and prospers. The reason cells have the ability to organize is because of protein receptors that transverse the cell wall and sense the environment. Think of these receptors as antennae sensing the environment. The ability for cells to communicate allows them to differentiate and provide specialized functions to benefit the organism as a whole. Some cells develop into muscle, some into bone and others into cartilage, nervous tissue, liver and all other tissues of the body.

Specialized cells have special requirements for energy. Tight control of energy utilization is needed so as not to burn up resources needlessly or produce too much exhaust of toxic by-products of metabolism.  Feedback control mechanisms ensure that the correct amounts of energy and exhaust are produced.

Cells produce protein enzymes that sequentially break down sugars and fats. The end product of metabolizing sugars and Fats is a molecule called ATP or Adenosine Triphosphate. ATP is a chemical storage battery that the cells use to power all metabolic processes.  Each step in the metabolic breakdown of sugar, in order to produce ATP, has to be regulated by a feedback mechanism to ensure homeostatic balance is maintained.

Enzyme cascades, whose purpose is to metabolize different food sources (substrates), have a feedback mechanism. Feedback control occurs when the product of any step in an enzymatic process inhibits the production of more of that product.  This negative feedback controls the overall rate of the enzymatic process to prevent overproduction. The diagram below shows feedback inhibition of the initiating enzyme (a) by the end product of the reaction in the cascade.

Glycolysis metabolizes the substrate glucose, which is broken down by an enzymatic cascade. This produces energy in the form of ATP (Adenosine Tri Phosphate or the energy molecule of the cell!). The first step is to Phosphorylate glucose to make G-6-P or Glucose-6-Phosphate. The presence of G-6-P will stimulate the next enzyme in the cascade to further degrade the glucose and produce ATP. The presence of G-6-P will also inhibit the enzyme that phosphorylates Glucose so that a build up of G-6-P does not occur. By this feedback mechanism, both the stimulation and inhibition of the overall enzymatic process are controlled. The process of stimulating one enzyme and inhibiting other enzymes is the process of Homeostasis, which is the ability to sense the environment and make changes in order to survive.

Changing rates of metabolism and sources of food allow the organism to adapt and survive. 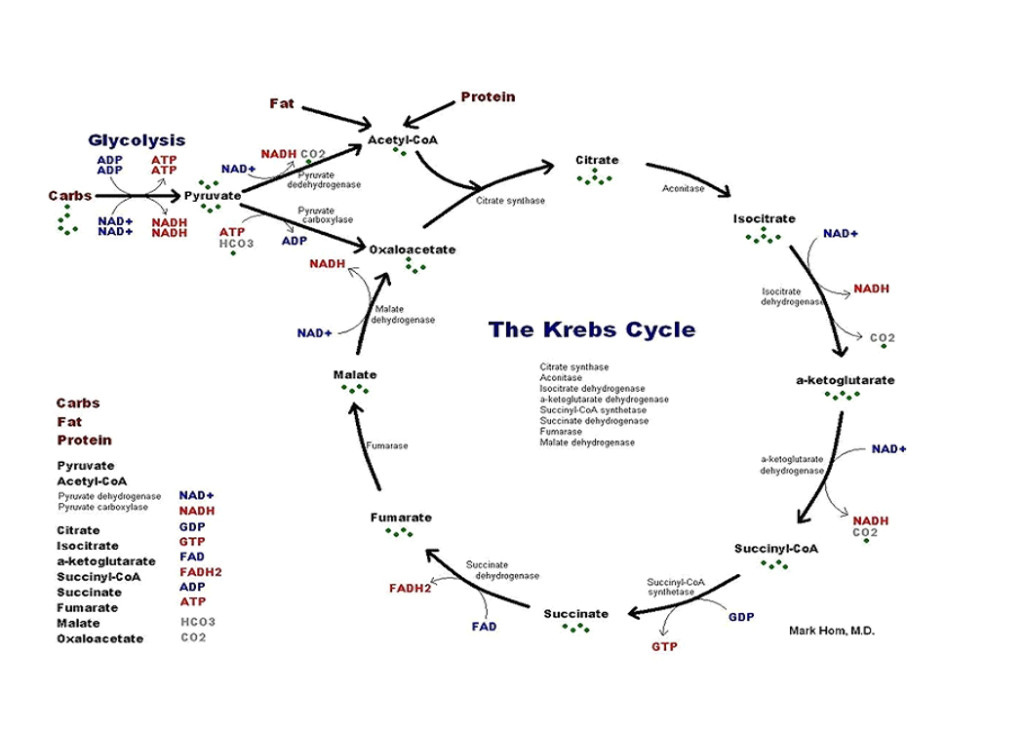 Glucose can be metabolized by Glycolysis and the Krebs cycle to quickly produce a very large amount of ATP. Fat is metabolized by a different enzyme system that produces ATP and oxygen free radicals at a slower rate than glycolysis. When you produce energy (ATP), you also produce exhaust in the form of Oxygen free radicals. These free radicals are the exhaust of cellular respiration. The free radicals have unpaired electrons and look to combine and oxidize the cell. This process is what is thought to be the causation of Aging. Oxygen Free radicals damage DNA and are partitioned from the DNA by the Nuclear Membrane. The Nuclear membrane’s sole purpose is to separate the DNA from the toxic products of cellular respiration that occur in the cytoplasm.

In all Eukaryote cells (cells with nuclear membranes), the sperm combines with the egg to form a Zygote. A Zygote is an embryonic stem cell with all of the DNA code information for the entire organism or animal. Stem cells are simple cells. They divide and make more stem cells and also differentiate into one of three specialized germ cell layers. Although the DNA information is present in the stem cells, they don’t have the proteins needed to make bone or muscle or nerve cell components. Additionally stem cells are susceptible to high concentrations of oxygen free radicals. By manipulating which substrate is burned, you change how fast ATP and oxygen free radicals are produced. Burning sugar produces a large amount of energy quickly in the form of ATP, yet also produces a large amount of exhaust in the form of oxygen free radicals.

Metabolizing fat produces even larger amounts of energy. It does so at a much slower rate, therefore producing exhaust or oxygen free radicals at a slower rate. Here is where the ECS or Endocannabinoid Signaling System has evolved to control cellular respiration, metabolism and energy production.  The ECS is a system of chemical messengers, protein receptors and enzyme systems to transport, degrade and removed excess cannabinoids.

The following diagram below shows the protein structure of CB1 and CB2 receptors in human tissue. The shaded area represents the cell membrane with the extracellular portion of the receptor on top and the intracellular portion below. Each dot represents a different amino acid in the protein chain. Each amino acid has a different charge that shapes the protein. The shape of the protein determines which signaling chemical binds to it.  The charges on the proteins and shape of the receptor antenna bind with the chemical messenger and function like a lock and key.  Only cannabinoids bind to cannabinoid receptors. 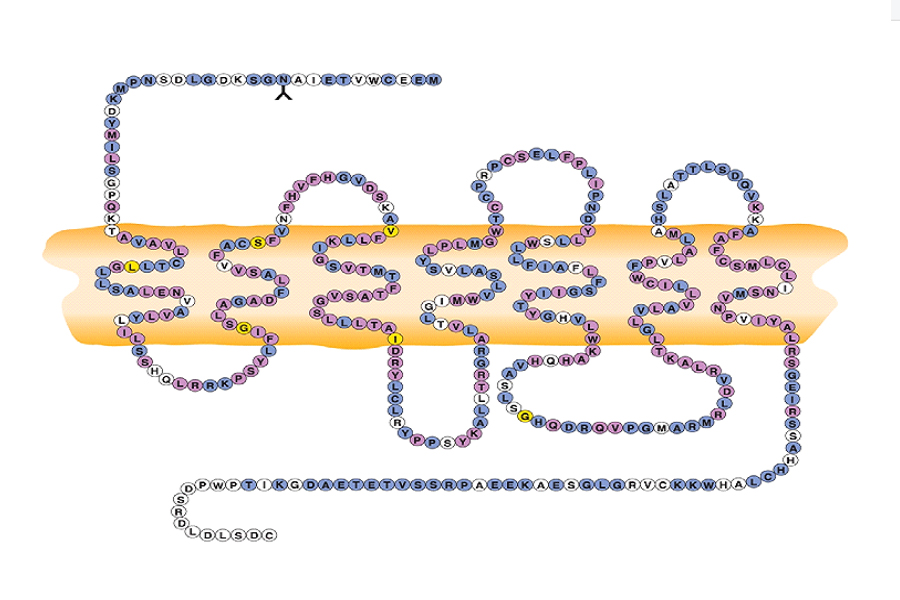 Anandamide and 2AG (2-arachidonoylglycerol) are two lipid-signaling molecules that the body makes (endogenous) and attach to the CB-1 and CB-2 receptor proteins. These lipid messenger molecules are oxidized fatty acids and classified as Eicosanoids.

CB-1 receptor stimulation controls glucose metabolism and CB-2 stimulation controls Lipid metabolism. This generalization is due to feedback control between the two systems. The control of metabolism also determines all other functions of the cell including cell division and cell differentiation. By altering and controlling metabolism, you can alter how the cell differentiates into any of the three tissue layers of the body. (Endoderm, Mesoderm, Ectoderm)

Different types of cells need different types of energy. What works for some cells would be toxic to other specialized cells. Bones need less energy than muscle and muscle needs less energy than nerve cells. Manipulation of concentrations and types of cannabinoid receptors on a cell will therefore change the rate and type of metabolism that the cell needs. All enzyme activity is directly related to the rate of metabolism!

Controlling glucose metabolism controls the rate of growth of all rapidly dividing cells including bacteria and cancer cells.

Hibernation is one of the most extreme examples of adaptability and homeostasis. Hibernation is a state of suspended animation. It is the ability to adapt to food shortages and environmental instability, thereby prolonging life.

Many mammals can hibernate and there are 4 stages.

In the pre-hibernation stage, the animal changes its metabolism to burn more white fat and less glucose, ramping up the metabolic machinery to burn fatty stores almost exclusively.

Animals died off if they couldn’t stand the evolutionary pressure of the severe cold environment. Only animals with the ability to lower their metabolic rate and live off of fat stores could survive these harsh environments.

Currently there are many clinical trials to investigate control of stem cell differentiation that use stem cells to treat Myocardial Infarctions, Strokes, Diabetes and a host of other maladies.

Cardiopoiesis Stem Cell therapy is a term to describe a new procedure where a patient’s own bone marrow is induced to grow stem cells that differentiate into beating heart cells. These beating heart cells or myocytes are grown in tissue culture and can then be injected directly into the site of myocardial infarction to repair dead muscle. Cardiopoiesis, although experimental, is but a glimpse of the direction in which the discovery of the ECS will take the practice of medicine.

The implications of these findings are as follows.

Evolution has forced organisms to alter their metabolism to survive. The ECS or Endocannabinoid Signaling System is the control system that allows homeostatic control of metabolism and physiology.

Without a functioning ECS; Life is not possible in changing environments.

Cannabis must be taken off of schedule one classification (no medical use) to allow un-restricted scientific and medical study of this new science.

by Owen Smith Dr. David Hepburn recently spoke at the 15th Cannabis convention at the University of Victoria. He expressed a desire to educate doctors about the use of medical cannabis as he thinks we are falling behind as a country. The registrar of the college of physicians recently wrote that “Canada could follow the […]

Churches struggle to accept cannabis while some call to end drug war Cannabis and I did not cross paths, in any real way, until I was in my mid-twenties. Like a child who had just discovered the truth about Santa Clause, I had to compare notes with my peers despite the taboo. As a former […]