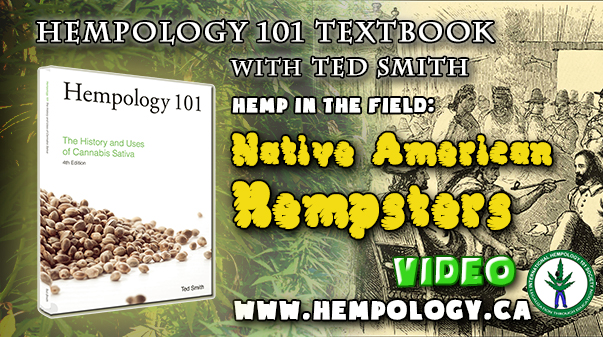 The use of hemp throughout the ancient world is extensive and diverse.  Even in North America there is solid proof that indigenous people were making hemp fabric thousands of years ago.  In this first video of the second chapter of my book, HEMPOLOGY 101: THE HISTORY AND USES OF CANNABIS SATIVA, I discuss some of the existing evidence that shows hemp was truly harvested globally used.

Some of the evidence of the use of hemp in North America before the European invasion come from stories told by voyages who reported seeing hemp growing along the shores of rivers as they explored inland.  Since one of the first crops brought by the invaders was hemp it might seem hard to prove that it was growing here first.  However, the Europeans were so familiar with hemp that it is hard to believe they would have been incorrect.

Proof hemp was used as fabric comes from discoveries made in Ohio in 1891 by Smithsonian Institute ethnologist W.H. Holmes.  He concluded the Hopewell Mound Builders, who lived about 400 BCE, buried their dead wrapped in hemp cloth and fibre.  Clay pipes with cannabis residue were also found in the so-called Death mask Mound, as reported by Rowan Robinson in his book, THE GREAT BOOK OF HEMP.

There has been speculation that one of the plants smoked by some tribes in North America was cannabis but there is little archaeological evidence of this.  If they did smoke the cannabis that grew here it probably was not very psychoactive but would be pleasant to smoke.  There does not seem to be any proof that the seeds were used, likely because there was already an abundance of protein.

If you want to learn more about the amazing history of cannabis please subscribe to the Youtube channel or buy my textbook.

Thinking About the Federal Election: Blog One: Conservative and Liberal Parties in Canada By Judith Stamps THE CONSERVATIVES.   In 1993, the Progressive Conservative Party of Canada, then under the leadership of Brian Mulroney, suffered a severe collapse, finding itself with 2 seats in Parliament, 10 short of official party status.  The decade that followed […]

By Gayle Quin I am going to start this issue with a heartfelt thanks to Minneh Kamau-Bushby. She has been a shining light, our Rock of Gibraltar, a never-ending supply of love and light, and captain of the guard around the front desk post for 11 years at VCBC. Sadly, she has left the club […]