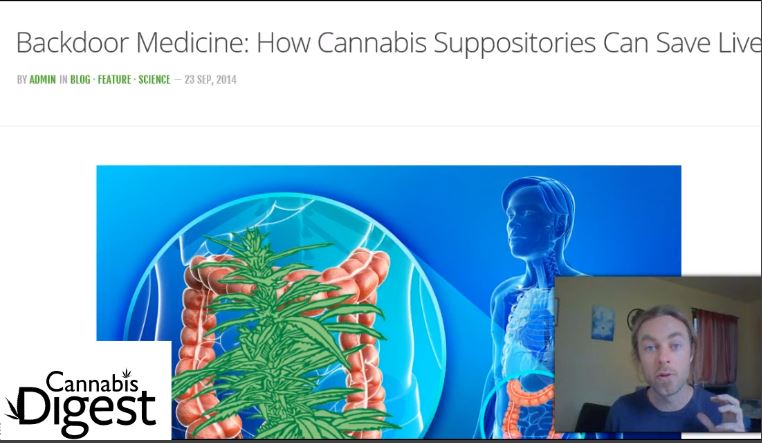 Talking Legalizing Cannabis; Medicinal Suppositories; The Sensible BC Conference and more from the Cannabis Digest this week

Owen Smith brings you the Cannabis Digest News from September 20-26, 2014

I had the opportunity to sit down to an interview with an agent for the Canadian Civil Liberties Association who recently had an encounter with local law enforcement. She managed to fight the matter in court and win.

“The judge I think was just really happy to actually see someone fighting for a fair trial. So many people make their deals with the Crown before they even set foot in the courtroom. I think he was glad there was someone actually utilizing the justice system.”

The club des Hashischin boasted many of the finest writers of the time as members, including Dumas, Hugo, Gautier, Baudelaire, De Nerval and Balzac.
.
http://cannabisdigest.ca/club-des-hashischin/

“Apparently they developed several rituals and customs, dressing up in Arabic clothes complete with a turban and dagger.  After eating a big chunk of hash, the group would sit around for hours talking and blissing out.”

How to Talk To Your Fellow Human About Legalizing Marijuana
.
http://cannabisdigest.ca/talk-fellow-human-legalizing-marijuana/

“Don’t say: I have a god given right to control what I put into my body. Seriously. If you say this you have dismissed all of your discussants’ concerns before even hearing them. In that case why should they listen to you? Start by finding common ground. Ask: What are your concerns?”

There are many advantages to the rectal administration of cannabis not afforded by other routes
.
http://cannabisdigest.ca/cannatory/

Backdoor Medicine: How Cannabis Suppositories Can Save Lives – Cannabis Digest

You are invited to join with Canada’s largest legalization team on the first weekend of October, to “Learn how to Legalize” at the Sensible BC Conference in Vancouver.
.
http://cannabisdigest.ca/youre-invited-sensible-bc-conference/

You’re invited to the Sensible BC Conference! – Cannabis Digest

the slow release from an edible can last many hours, ideal for sleeping through the night where a vaporizer may be helpful to get out of bed in the morning.
.
http://cannabisdigest.ca/benefits-eating-vaporizing-cannabis/

The Benefits of Eating and Vaporizing Cannabis – Cannabis Digest

“Once cannabis extracts have become legal, other plant medicines should be made legal using similar techniques. After all, many plants and products have been taken off shelves because the government has cited health and safety concerns without any real proof those concerns are based upon reality.”
.
http://cannabisdigest.ca/authorized-approved/

every category of pharmaceutical product will lose market share to these cannabis products, especially when they start turning out to be more effective …

Cam Birge·July 5, 2014
There are no comments yet No comments